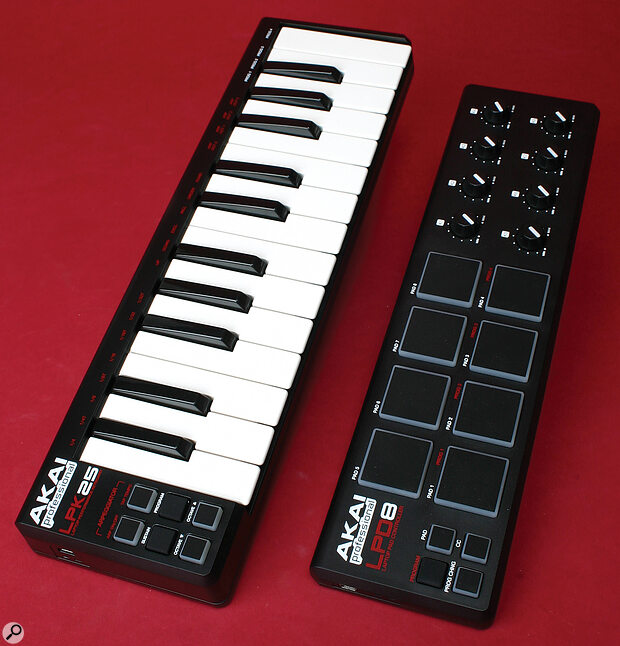 Are Akai's mini MIDI controllers the perfect partners for your laptop?

As increasingly powerful laptops have become viable hosts for the music studio, so the demand for portable and space‑saving peripherals and control devices is on the increase. This diminutive pair of Akai laptop controllers follows in the footsteps of Korg's Nano controllers, reviewed in the March 2009 issue of Sound On Sound. Whereas Korg's range offers a mini keyboard, drum pads and control knobs/sliders across three separate models, Akai have condensed a near‑similar range of facilities into two units, the LPD8 Pad Controller and the LPK25 Performance Keyboard.

Each unit is supplied with its own mini CD‑ROM containing librarian/editing software. Once this is installed, simply connect a unit via the included USB cable, then fire up the appropriate software editor and you're ready to go. PDF user manuals are accessible from within the Program Files / AkaiPro folder, although it's unlikely you'll get stuck, as operation of the software and hardware is simple and very intuitive.

The LPD8 combines eight drum finger‑pads with eight rotary 270‑degree control knobs in one handy, compact combo. Although Korg's Nano Pad and Nano Kontrol between them offer more pads, knobs, sliders and buttons, the LPD8 represents a reasonable compromise, given the limited physical space of the single unit. The backlit, velocity-sensitive pads themselves have quadruple functions, these being selected via the four smaller buttons to the left.

In Program mode, the lower four pads become preset buttons, selecting any of the LPD8's four user‑definable presets. In CC mode, all eight pads transmit control change messages, and each pad's controller message is user-definable via the LPD8 editing software. Additionally, since the pads are velocity sensitive, variable control message values are sent depending on how hard you hit the pads. This is a fun way of adding spontaneous rhythmical variation to synth parameters — filter cutoff frequency, resonance or oscillator sync frequency, for example.

In Program Change mode, the pads transmit program change messages, assignable per pad from within the editor. Pad mode is the 'default' performance mode, where pads send note on/off messages. Each pad's behaviour can be either momentary (on as long as it's held, off when released) or 'togglable'. For note data, the togglable effects are fairly obvious: hit once for note on, and again for note off. In CC mode, the 'on' hit transmits a control value dependent on velocity, while the 'off' hit sends a value of zero. The eight rotary controller knobs are straightforward in operation, with controller number and minimum/maximum operational range assignable for each knob.

The 25‑note, C‑C mini keyboard of the LPK25 resembles those posh types of melodica I couldn't afford as a kid. The keys are velocity sensitive (the velocity curve is fixed) and are just about large enough to be playable by all but the chubbiest of fingers. Octave-shift buttons provide plus or minus four octaves of shift in each direction, giving access to nine octaves in all.

There are no pitch‑bend or modulation controls (the LPD8 can handle modulation duties), but there is a sustain button that transmits CC64, providing the same function as a sustain pedal. The feel of the keyboard is somewhat spongy, and its fixed velocity curve appears to be inversely exponential. As a result, I found it difficult to consistently generate velocity values in the range between 1 and 70 without playing very gingerly indeed!

The LPK25 features a built‑in arpeggiator, which offers various up/down modes, as well as random arpeggiation. Its time base can be set to correspond to 1/4, 1/8, 1/16 and 1/32 straight and triplet note values relative to the tempo, the bpm of which is determined in the editing software. Optionally, the LPK25's Tap Tempo button allows you to input the tempo on the fly, and can be set to respond after two, three or four taps. The arpeggiator also has an option to sync to external clock, although I couldn't get this to work. A glance at the specs indicated that the LPK25 responds to MIDI clock rather than host DAW tempo. However, it transpires that Cakewalk's Sonar, my DAW of choice, cannot transmit MIDI clock from a USB port!

The arpeggiator also includes a latching option, which can either be programmed into a preset, or invoked manually from the unit using the sustain button. Just above each key are the various arpeggiator functions printed in tiny crimson letters. By holding the Arp on/off button and pressing the appropriate keys, you can adjust the time base, mode and octave range of the arpeggiator without having to go to the editor. It must be said that Akai's choice of six‑point crimson‑on‑black lettering makes for hard reading even in good lighting!

Those of a particularly demanding nature may require a more sophisticated level of control than these units provide. Nevertheless, for laptop musicians needing a compact, lightweight means of inputting notes and beats, or applying the occasional real‑time parameter tweak, both units may well offer just the right facilities.

Korg's Nano Pad, Nano Keys and Nano Kontrol offer the same bijou convenience, along with a greater level of sophistication — but that's with three devices, as opposed to Akai's two. For an all‑in‑one approach, there's Novation's Nocturn 25 or M‑Audio's Axiom 25. Both of these boast full‑sized keys, pitch and mod wheels, knobs and pads all in the one box, although they're inevitably bulkier than the tiny Korg or Akai units, and cost considerably more.

The same operational rules apply to both LPD8 and LPK25 editors. To edit an existing preset, click on one of the four 'Get Preset From Device' buttons, and the editor's settings update to reflect the chosen preset. Parameter changes made in the editor can't be auditioned in real time but must be transmitted to the hardware first. This is quickly and easily done: in the editor, just select the preset number you wish to update, click on 'Commit — Upload' and the hardware updates instantly. However, an issue became apparent concerning the prioritisation of the USB port when using the controllers alongside a host DAW, in my case Sonar 8 running under Windows XP. If either editor was started before running Sonar, its USB port would be listed in Sonar's device list, but remained stubbornly inaccessible. If Sonar was started first, everything worked fine.

I contacted Akai about this, and they said it's not a fault with the LPD8 or LPK25, but is due to the fact that in Windows XP, only one application can have complete access to a USB MIDI port at a time. Akai suggest exiting the DAW, which will free up access to the USB port, then running the Editor to make the necessary changes. Another workaround I found was to save each device's presets as files to the hard drive (a handy librarian function in its own right) and load them back into the editor when required.

Small, lightweight and simple to use, these controllers could provide just the level of hotel‑room tweakability that laptop musicians on the move are looking for.