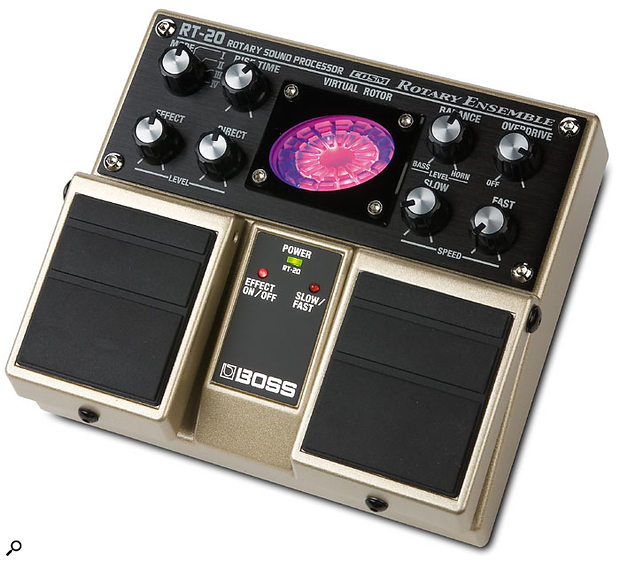 The latest box of tricks from Boss is a pedal-based Leslie speaker simulator with some cool flashing lights.

Rotary speakers, or more commonly, systems of rotating baffles placed over fixed speakers, were originally developed for use with the electric organ, but before long, more experimental bands were also using them on guitar and vocals. Recreating this unique sound, which involves variations in level, timbre and pitch, is not easy, and for this latest attempt Roland's Boss division have used their COSM technology to model the characteristics of the rotary speaker in great detail. But what most people will notice first is the wonderful swirling LED display at the centre of the front panel!

In true Boss tradition, the robust pedal is made from cast metal. It can be powered either from six AA batteries or from an optional external power adaptor. All the connections are on the rear edge of the unit. Both the input (switchable to suit guitar or keyboard) and output can be in mono or stereo. There's also a headphone output, and you can plug in an expression pedal to control the effect's speed directly.

The left pedal turns the effect on or off and the right pedal switches between slow and fast speeds. Pressing both pedals together activates the brake, imitating the effect of bringing the rotors to a halt over the period of two or three seconds. The right pedal LED blinks when the brake is active, and stomping on the speed pedal starts the rotary effect again.

There are four effect modes, three of which are rotary speaker emulations while the fourth is inspired by the Univibe pedal made famous by Jimi Hendrix. Mode 1 is designed to sound like a Leslie 122, including that model's overdrive characteristics, while Mode 2 replicates a close-miked version of the same unit to give an enhanced modulation effect. Mode 3 combines the rotary speaker of the first two models with a 1959 Marshall guitar amp, offering more distortion. Finally, there's the Univibe setting, again combined with the guitar amp distortion of Mode 3.

Other controls adjust how long it takes the effect to speed up and slow down when the speed is changed, the level of the effected and direct signals, the bass/horn balance, the slow and fast rotary speeds and the amount of distortion, from off to fully saturated. The central elliptical display comprises multiple red and blue LEDs that are sequenced to provide a sense of bass and horn rotation.

The first thing you notice about a real Leslie is that it reproduces no real high end at all, with the treble horn carrying mainly mid-range information with a lot of tonal coloration. The same is true of the RT20, which reshapes the high end very much like the real thing. In my view the dynamics of the speed change feel pretty good, as does the brake option, and being able to change the horn/bass balance gives you a reasonable amount of control over tonality. The effect works nicely both in stereo and mono. In fact, it seems to lose very little for being used in mono. I'm not entirely convinced that it exactly captures the more subtle nuances of the watery shimmer that a real Leslie produces but that's hard to judge — with the real thing much depends on the room you record it in and on how you mike it up. However, the RT20 is certainly warm and musical and sounds good on both guitar and keyboards. As a gentle and more musical alternative to a slow chorus or phaser, the slow setting is very hard to beat. The Univibe setting gives a lovely soft phasey chorus, with the balance knob acting as a depth control.

I did notice that the unit produced a noticeable amount of noise that also gets processed via the rotary effect, but this dies away smoothly as your input sound decays. The noise does add an organic (no pun intended) quality to the sound and it may have been added intentionally to simulate the wind and mechanical noise of the real thing, but if that is the case, I'd have liked the option of turning it off!

Having adjustable distortion is very useful, both for guitar and keyboards. With keyboards it gives a nice low-end growl but can also tend to make the sound a bit muddy. As promised, the guitar-amp-style distortion of Mode 3 and 4 is a bit more far-reaching but still very dense at the lower frequencies.

While there are software emulations and effects built into keyboards and amps that sound to my ears just as authentic as the RT20, having everything in a pedal really is a bonus in terms of controllability, especially when playing live. It isn't particularly cheap, but the RT20 lets the user tailor the effect to a useful extent and switch speeds and brake using pedals. Its replication of the mid-range tonal coloration of a Leslie speaker is also probably more accurate than most, while the addition of a very sweet Univibe emulation and built-in distortion is icing on the cake. There's also the advantage that the RT20 can process mono or stereo signals, producing a mono or stereo output, and it's switchable to suit guitar or keyboard sources. Using the keyboard setting, it's possible to process line-level sources, so you could use it in the studio for treating already-recorded tracks. While the purists will continue to argue about the authenticity of all such units, I know which I'd rather carry up the fire escape to a gig!

The RT20 puts good-quality rotary speaker emulation into a practical pedal format that should work well for guitarists and keyboard players alike, both live and in the studio. It combines flexibility of operation with ease of use and has what is probably the most hypnotic visual display in the history of effect pedal technology.