In the film world, orchestral strings reign supreme. Has the latest movie‑oriented string library got what it takes to spill your popcorn? 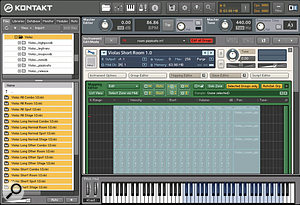 Think film scores, and you think strings. Whether the mood is romantic, dramatic, brooding or plain scary, orchestral strings have always dominated movie soundtracks — listen to the music behind any pirate battle scene and you'll invariably hear the strings driving the rhythm along under the yo‑ho‑ho‑horn melodies. With media composers clamouring to get that expensive Hollywood action film feel into their orchestral mock‑ups, sound companies are once again turning their attention to creating string libraries that will help to give productions the requisite big‑screen sound.

One outfit are so committed to the cause that they adopted it as their company name: Cinematic Strings, an enterprise headed by David Hearn and Alex Wallbank. The operation spans two hemispheres, with Hearn conducting his composing, production and programming duties in London, while Wallbank does the same kind of thing in Sydney, Australia. The orientation problems of standing on opposite sides of the globe don't prevent these two from seeing eye to eye: as busy composers whose work involves creating orchestral mock‑ups to tight deadlines, both perceived limitations in the current crop of orchestral libraries, which they felt could only be addressed by creating a new strings collection that's optimised for film work.

The Cinematic Strings samples were recorded in a modern, 500‑seater, split‑level Sydney concert hall using players from a variety of orchestras, including the Sydney Symphony and Australian Opera Orchestra. The hall was selected for its warm tone, clear sound and medium size, big enough to create natural ambience without drowning the sound in reverb. Forty players were involved (see below for details), and while that's fewer than you'd find on a full‑blown Hollywood orchestral scoring session, I can say from experience that it's more than enough to achieve a big, powerful and lush strings sound. Different players were employed for the first and second violins sections, maintaining orchestral realism, avoiding phasing issues on unison notes and effectively doubling the choice of violin section deliveries.

With cinematic 5.1 surround mixes in mind, the library offers three microphone positions: the close‑miked 'spot' samples are mono and comparatively dry, with a convolution reverb adding a subtle stereo ambience. The 'stage' miking sounds far more dramatic and panoramic, with the different sections subtly fanned out across the stereo and a healthy amount of ambience in the sound. This is the miking I'd recommend for general use. In the third, distant miking, the hall ambience can clearly be heard as a big room acoustic, spacious rather than reverberant. The overall effect is that of a string section that needs no additional reverb to fulfil its sound, but is not so intrinsically 'wet' that it sounds ringing and distant. A neat application in a surround mix would be to place the stage samples in the front stereo speakers and the room samples in the rear pair, thereby replicating the concert hall's real‑life acoustic in quad sound.

When auditioning the sustains, tremolos and trills, I was surprised to find that they don't respond to velocity — and that's because CS favours the 'velocity crossfade' approach of mod‑wheel dynamic control. If you want to play these long‑note articulations with two hands and incorporate real‑time dynamic variation, you can use the instrument's 'CC setup' page to reassign velocity control from the wheel to a footpedal. An alternative method is to record MIDI parts with no dynamics, then draw on‑screen velocity curves after the event. Coming from a playing background, I was initially sceptical about this approach, but after discovering that a simple up‑and‑down velocity curve drawn on Logic's Hyperdraw page produced a subtle, emotive, musically convincing and utterly smooth crescendo‑diminuendo from the strings, I became a convert. However, I was glad to see that the pizzicatos and staccatos are velocity‑controlled in the traditional way.

CS offers two types of vibrato sustains: 'low position' performances, in which notes are played low down on the neck; and 'high position', with the hand placed a fifth higher up, causing mid‑range notes to be played one string lower than in low position. This has a marked effect on timbre: the high‑position samples have a noticeably darker, more intense tone than the brighter, more open‑sounding low‑position ones. There are also some serious‑sounding non‑vibrato samples, which can be crossfaded with the vibrato deliveries (a nice expressive effect) by using the default CC2 breath control. All CC mappings and keyswitch notes can easily be changed by users, good news for those who want to import CS into their existing orchestral templates.

On playing the samples, the word 'consistent' came to mind. The five sections are well matched and perform an identical menu of articulations (including legatos, more on which shortly). Keyswitch pitches are the same throughout the library, making it easy to learn the right moves for articulation changes. All the sections' vibrato sustains sound lush straight out of the box; even the second violins sound pretty opulent, though the greater numerical strength of the first violins creates a fuller, more rounded tone.

The lower strings share the violins' rich, high‑quality sound; the violas' high-position vibratos sound darkly romantic, and the long note deliveries of the cello section are a joy to play. I was struck by the basses' warmth and power, though I did hear one or two minor tuning issues on high notes. It was nothing that would spoil the party, however, and the makers would say that such small imperfections occur all the time in real‑life performance and have been left untouched as part of their naturalistic approach. All sections' tremolos and trills sound fine — and if you layer the cellos' and basses' tremolos and play a loud bottom 'C', the gigantic, shuddering racket that emerges will set seismologists scrambling for their 'red alert' buttons. 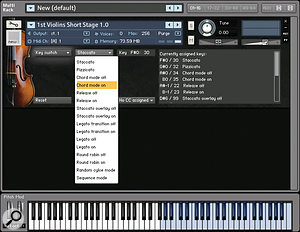 Keyswitch assignments are user‑configurable.Whereas the natural development of a slow‑bowed string section note is a beautiful thing, that languorous, romantic orchestral approach doesn't lend itself well to zappy pop arrangements. To help their sustained notes speak quickly, CS reintroduce the 1980s technique of overlaying a staccato attack. Thus, long‑note patches all have a nicely‑blended 'staccato overlay' layer which can be turned on and off as desired. You can manage without it for slow chord pads, but with faster lines you'll be very glad it's there.

The four‑dynamic staccatos are crying out for deployment in blood‑and‑thunder film action scenes: the fff deliveries sound forceful, meaty and aggressive, while the quieter staccatos retain the precision and delicate bite required for fast detaché passages. The second violins' loud staccatos sound a little tighter, brighter and more briskly‑played than the firsts, so you might want to choose them for your more emphatic violin passages. A generous sample of blended 'Monster Staccatos' is a free download from CS's site.

Following the example of other top libraries, the makers recorded interval‑based legatos of up to an octave on all notes. CS trimmed the interval performances down to short transition samples, which are automatically inserted between notes when legato mode is activated and notes are slightly overlapped, effectively bridging the gap and binding notes together. The secret to this (apart from the slog of recording all the intervals) lies in intelligent scripting, which recognises the playing direction and selects the appropriate transition 'chunk' for each interval. The smoothing effect is very welcome, and the results, though not 100 percent lifelike, sound seamless.

A second, synthesized legato mode inserts tiny pitch-bends between notes, simulating the way string players instinctively perform small slides. The effect is subtle: like a clock that stops ticking, I only noticed it when I turned it off and notes suddenly sounded disconnected! I was delighted to find that turning the 'bend' setting up to 11 (so to speak) produces portamento slides that do a decent imitation of the sinuous 'Bollywood strings' style. And if you're in the market for that annoying 'plucked strings denoting irony' orchestration style which is now de rigueur in US so‑called comedy TV productions, the pizzicatos sound universally great.

Other interesting innovations in this library include the ability to make release tails sound only on the last note of a phrase (which aids clarity in fast lines) and a chordal volume control that reduces the levels of samples to maintain a natural dynamic relationship between chords and single lines. The numerous functions and inventive programming quirks are explained in detail in a well‑written PDF guide.

At the time of writing, the US dollar price of Cinematic Strings equates to about £430, which in London property terms places it midway between snooty Kensington and down‑to‑earth Dagenham (or, if you prefer the old Monopoly locations, Mayfair and Old Kent Road). To my ears, it delivers a top‑class sound on a budget most professionals won't consider too steep, especially considering the eye‑watering Park Lane prices placed on some strings collections in the past.

Media composers often say that when chasing a deadline, there isn't time to wade through long menus of subtly‑differentiated articulations. Cinematic Strings could be a godsend here, as its string sections cut to the chase and do the meat‑and‑potatoes filmic stuff very well straight out of the box. There are obvious omissions — the library has no solo instruments, played portamentos, glissandi, harmonics, col legnos, runs or grace notes, and would therefore struggle to reproduce the myriad musical details of a full symphonic score. But its sound is second to none, and the quality, directness, real‑time playability and musical potency of its sections are compelling reasons to buy it.

Of the current libraries offering comparable content to Cinematic Strings, Audibro's LA Scoring Strings is the most high‑end. Priced at around $1400, it has multiple divisi options and impressive technical features, but no true second violins. For $400 less, Sonivox (formerly Sonic Implants) Symphonic String Collection is less flexible, but boasts a full instrumentation and a real concert-hall acoustic. Appassionata Strings I from Vienna Symphonic Library (standard edition $675, full edition $605) features large string sections (but no second violins) delivering Hollywood‑style strings in forensic musical detail, while Kirk Hunter Studios Concert Strings II offers a four‑way choice of section sizes (including solo strings) and a good spread of articulations at a slightly cheaper price. The only strings that match CS's triple miking setup are found in EastWest/Quantum Leap's Symphonic Orchestra, but its current Play Edition does not have a separate strings volume.

To get the best performance out of their 22GB library, the makers recommend a minimum 2.66GHz processor and 4GB of RAM. The samples (recorded at tone intervals) are formatted for Kontakt 3.5 and are available only as a download; to speed the transfer of this stonking amount of data, CS developed a download/installation utility that compresses the size of the library by a third with no loss of sample quality. They claim that with a decent Internet connection it's actually faster to download than it would be to install from DVD. However, they don't recommend attempting it on a slow Internet connection, which is evidently what I have, because my download took a stupendous amount of time. (I do live in an out‑of‑the‑way rural location — perhaps there was a cow on the line?) The good news was that I was able to go on using the computer while the data downloaded in the background, and also had the comfort of knowing that the utility can resume downloading in the event of a drop‑out.

A highly effective, great‑sounding, intelligently‑programmed library of decent‑sized string sections playing their lush sustains, tough, driving staccatos and smooth legatos in a nice hall acoustic with a choice of three mikings — what more could a busy media composer chasing a deadline want?