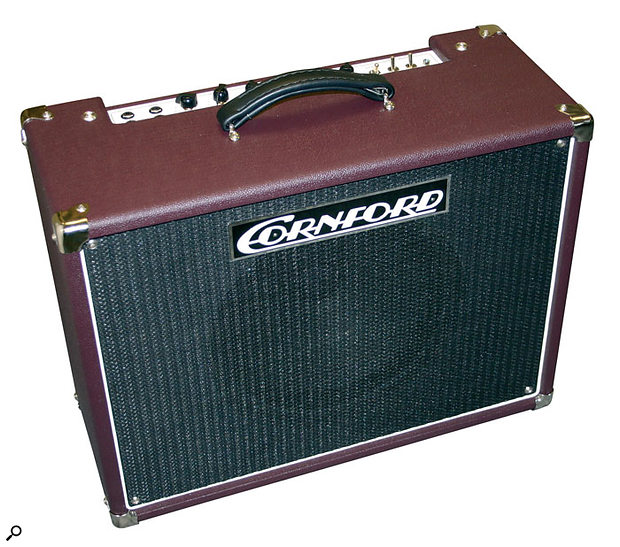 A recording amp with switchable choice of output tube type.

Cornford Amplification, the UK-based maker of high-quality guitar amplifiers have launched a companion to their acclaimed Harlequin 6-Watt, class-A recording amplifier. Their new Carrera model adds a number of features, including a mid-range EQ control, a front-panel send/return effects loop, standby switch and a spring reverb. Most interesting of all, however, is the inclusion of two different types of output tube, one eight-pin type (such as the 6L6 and EL34) and one nine-pin (6V6, EL84), with the user able to switch between them to get different sound characteristics. 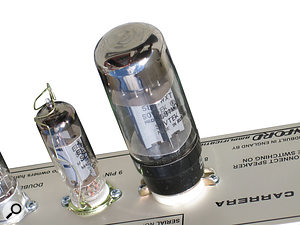 The Carrera ships with an EL84 (the same as the Harlequin's single output tube) and a 6L6 on board, offering 5 Watts and 8 Watts respectively, but you can swap these for, say, a 6V6 (like a Fender Deluxe) and an EL34 (typical of most Marshalls), greatly enhancing the amp's versatility in the studio.

You can also swap any of the Carrera's three 12AX7 preamp valves for a lower gain 12AT7 or 12AU7 to further fine-tune the amp's gain structure to your own requirements.

Although there have been previous amp designs that can accommodate a range of different output valve types (notably the THD models), there's nothing like being able to do it at the flick of a switch to encourage creative experimentation.

In action, the amp sounds every bit as sweet as the Harlequin, but with more scope to lift or de-emphasise mid-range without sacrificing overall drive level. Switching to a different output valve type really does change the vocabulary of the amp, with a 6L6 in particular giving a warmer and bigger sound, especially on cleaner or right-on-the-edge sounds.

Although there have been previous amp designs that can accommodate a range of different output valve types (notably the THD models), there's nothing like being able to do it at the flick of a switch to encourage creative experimentation.

On all valve types, the overall amp voicing remains just on the dark side, like the Harlequin, making it ideally suited to close-miking. Brighter amps may be better at filling a room, but they tend to sound brittle and harsh when close-miked. The Carerra's 'browner' tones are ideal for the robust directness of an SM57 right against the cone, whilst still rewarding subtler treatments like a ribbon mic or a condenser backed off a couple of feet.

At £999, the Carrera complements the Harlequin in the Cornford range rather than replacing it, and should certainly be on the audition shortlist for any recording guitarist into premium tube amps.

A very successful realisation of the high-quality, low-power guitar recording amplifier concept, with the added twist of switchable output tube types. Nothing else exactly like it on the market; a THD UniValve with a suitable speaker would get you in the same sonic territory, but you'd have to swap over the tube type manually when you wanted a change of character.