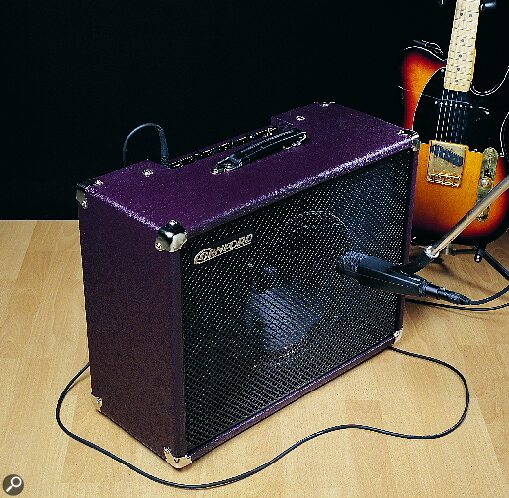 Dave Lockwood explains why a Class A valve guitar amp that can muster a mere six Watts is fully deserving of a place in the pages of Sound On Sound.

The Harlequin, from Kent‑based Cornford Amplification, is a purpose‑built recording amplifier. Think about that for a minute. What makes an amplifier into a 'recording amplifier'? It needs to sound good, obviously; it needs to be reasonably free from hum and hiss; and it doesn't need a lot of output power, as it will probably never be used in a live performance situation. Well, so what? There are dozens, if not hundreds of amplifiers on the market that fulfil that particular brief, so what's special about this one?

Well, to start with, the Harlequin is not small. Most very low‑powered guitar amps on the market, even the small number of valve amps that fall into this category, are considered to be primarily 'practice amps', with portability and economy of manufacture given precedence over sound quality in the design. Unfortunately, you can't defeat the laws of physics here — a small speaker in a small box will never sound like a big speaker in a big box, so you will have to resort to some miking and EQ tricks if you want it to sound big on your recorded tracks. Paul Cornford and Martin Kidd's design, however, is the size of a proper combo (600 x 450 x 250mm) — bigger than a classic Mesa Boogie, but smaller than an AC30. The 12‑inch Celestion Vintage 30 speaker has room to breathe, resulting in a noticeable absence of the normal boxy coloration that is usually the first thing to overcome when recording a small guitar combo.

What really makes the Harlequin tick, though, is its 6‑Watt single‑ended, Class A valve output stage (see box on page 42). Using such a low‑powered output stage allows the player to crank the volume control to the desired level — flat‑out if necessary — to achieve just the right amount of compression and distortion, without the acoustic output becoming a nuisance. In a pro studio, this equates to less spill into other mics, and in the home studio, less tendency to annoy the wife/flatmates/neighbours and restrict your recording time to moments when all of the above are out! Using the conventional Volume and Master gain control arrangement, the Harlequin's two 12AX7s and single EL84 can easily be dialled in to the sweet spot where the guitar really comes alive, both in tone and feel. This is an amp that excels at all the classic valve tones that even the most sophisticated of recording processors fall down on — fundamentally warm with a glassy shimmer, but biting back at you when you dig in to it. It's all there, with the minimum of fuss and fiddling around. Sure, there are tone controls to play with — a standard bass and treble arrangement — but I guarantee you won't spend too much time on them, for there isn't a bad sound to be had out of this amplifier. You can pretty much put any of the controls anywhere and come up with something usable. Everything on 2 o'clock did it for me, leaving the rest to my volume control, pick‑up selection and playing dynamics. Advancing the Volume (input gain) control past halfway brings in an additional gain stage and lets you drive the thing way beyond traditional warmth. Input gain all the way up and Master down will give you a more ragged‑sounding front‑end (input stage) distortion, reminiscent of using a pedal in front of the amp, while input gain up high and Master well up too will give you an absolute killer everything‑on‑11 tone.

Of course, there's not a massive amount of headroom on the clean sounds — the sound will 'squash' when you hit it hard, even with the input gain well down — but in practice, if you are having a problem with this, then you've probably forgotten that this is a recording amp, designed to be listened to by a close‑up mic, rather than to fill a room.

The only remaining tonal tweak is the two‑position Voice switch which offers a useful alternative tonality, with a more focused mid‑range, useful for crunchy high‑gain power chording or middly neck‑pickup Carlos Santana soloing. That's it for facilities — two input jacks (Hi and Lo), Volume, Bass, Treble, Master, power switch (no Standby), power indicator and fuse. No reverb? Why would you want that in a dedicated recording amp? No effects loop? Ditto; that stuff is going to be added at the mixer. No Line Out? That would be missing the point completely. The only connection on the output side is the speaker output, which thoughtfully uses a quarter‑inch jack, rather than a hard‑wired connection, thus allowing it to be easily connected to a sealed 'silent' speaker box or even a speaker simulator, provided that a dummy load is employed to keep the output stage happy.

Inside, everything about the Harlequin says quality and attention to detail, from the dovetail‑jointed solid pine box (chosen for sound, of course) to the point‑to‑point hand wiring of the chassis‑mounted components. Even the transformers are in‑house, custom‑designed, hand‑wound affairs. In the studio, the Harlequin is an absolute treasure. Stick a smoothish dynamic mic, perhaps a Shure SM57 or a Sennheiser MD421, right up against the grille, or any large‑diaphragm condenser about a foot back from the cabinet to let it breathe a bit more, and there's your guitar sound! Humbuckers are full and fruity, single coils a little more wiry with a bit more air, but whatever you put in to it, the character of the instrument and the player's touch still come through.

I can't really say that the Harlequin sounds precisely like anything in particular — it has a character all of its own — but it is versatile enough to offer most of the usable vocabulary, from a passable Marshall crunch to a ringing blackface Fender, passing through a tight Class A Vox and a singing Boogie lead voice on the way. It's really easy to get the sound in your head onto tape (or hard disk) with this amplifier, and once it's there, you will find it easy to mix, for there is something about the sound of a real amp and speaker, well‑miked, that just sits in a track better than any faked version that I've ever heard.

The Cornford Harlequin recording amplifier is well‑conceived and faultlessly executed. Makes you wonder why nobody did it before! 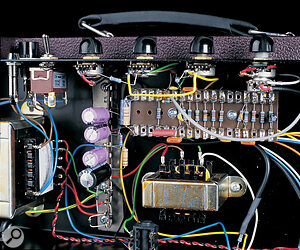 Inside the Cornford amp, there's no PCB, just well‑finished point‑to‑point hand wiring, redolent of some classic vintage amplifiers and many of today's finest 'boutique' models from the USA.

The sounds that we think of as classic electric guitar tones all involve a significant amount of distortion, even the clean ones! Early valve amplifiers, driven beyond their design limits, produced large amounts of distortion, generating strong harmonic overtones, vastly increasing the high‑frequency content of the signal. A typical 12‑inch guitar speaker, however, has a response that rolls off quite sharply above 3kHz, rendering most of the higher harmonic content inaudible. The part that remains within the audible band, however, serves to make the guitar sound richer, thicker and significantly more interesting.

This is the problem facing the designers of DI guitar recording processors. The guitar doesn't sound right without the distortion, and the distortion doesn't sound right without the speaker to shape it. Over the years there have been many attempts to replicate the response of the typical guitar loudspeaker in guitar processors and dedicated speaker simulator products, using passive filters, active electronics and, more recently, digital modelling. It's a complex job, however — the roll‑off has to be steep enough to get rid of all trace of 'fizzy' upper harmonics, whilst there has to be enough of a pre‑roll‑off peak to give sufficient bite and edge in the sound, and that's without even beginning to look at what's happening at the bottom end in terms of resonance and speaker thump!

For a while yet, I suspect, the only thing that will really do the job for the most discerning guitar players will still be the sound of a cardboard cone flapping about in response to a coil of wire moving in a magnetic gap, driven by a valve amplifier. 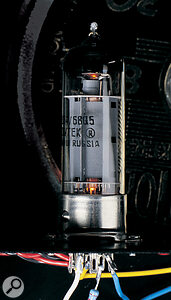 Amplifier designs are divided into a range of 'classes', describing their basic circuit topology. Class A is one of the purest‑sounding, when driven within its intended range, but also one of the least efficient, using a high quiescent current (the current running through the output devices when no signal is present). A Class A output stage is also easily overdriven, hence its popularity in lower‑powered guitar amps (Vox, Matchless, some Mesa Boogie models etc). The Harlequin's designation as 'single‑ended' differentiates it from the 'push‑pull' designs which are more common in higher‑powered applications. A push‑pull output stage will utilise one or more pairs of complementary output devices, within which each device is used to amplify only half the signal, ie. just the positive‑ or the negative‑going half of the waveform, with the two halves being reunited at the output transformer. This offers much greater efficiency, but at the expense of some fidelity. Such designs generally fall into the Class AB category, typical of Marshall, Fender and, in fact, most other higher‑powered guitar amp designs. In guitar applications, Class AB is not inherently worse, or better, just different. Mesa Engineering's innovative 'Simul‑Class', pioneered in their Boogie model amps, actually utilises two different output stages running in parallel, one in Class A and one in Class AB, to give you the best of both worlds — sweet Class A at low level but with the greater power and headroom of Class AB on tap when it is needed.

Sometimes there is no substitute for the real thing and this is the real thing. A 6‑Watt, class A valve amp that you can use at bedroom volume to give you the full range of classic recorded guitar sounds.