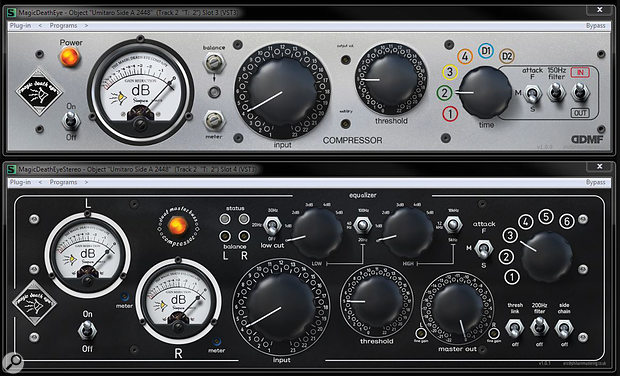 These two plug‑ins bring you the spirit of their 'unobtainium' hardware counterparts!

I first heard of the Magic Death Eye analogue compressor from an American mastering colleague who'd just taken delivery of one. Intrigued, I looked for more details but sadly soon found a few good reasons for me not to rush out and get one. First, designer/builder Ian Sefchick can only produce them when free from the demands of his mastering career at Capitol Records, so his output is both limited and irregular. Second, even if one were to become available, he doesn't make them for export outside the USA. Finally, the stereo version costs $8,800! That's actually not an unreasonable amount to ask for a superbly designed, hand-built vari‑mu compressor, but it is hardly chump change.

So when I learned that DDMF had created a plug‑in version, I quickly tried the demo. It was good, and within a couple of hours I'd bought it. Recently, DDMF released another 'stereo' Magic Death Eye plug‑in. I bought that one immediately too and both plug‑ins now have a home in my mastering workflow and have already been used on several professional projects.

There are versions for the common Mac OS (v10.8 or higher) and Windows (32- and 64-bit, v7 or higher) plug‑in formats, and an AUv3 version for iOS. Installation and activation on my Windows 10 and Sequoia 14 system was blessedly simple: the license is provided in a ZIP file, and you locate it when you first use the plug‑in. Sadly, I've no way to confirm how close the sound of the plug‑ins are to the originals, so I've had to assume a very close kinship and evaluate them on their own terms.

Despite the names, both Magic Death Eye plug‑ins are fully stereo in operation. One, which I'll refer to as MDE, is called 'Mono' because it is based on the mono version of the hardware; the 'Stereo' version (MDEST) is modelled after the stereo hardware unit. There are enough differences between the plug‑ins to consider having both in the toolbox, though their basic design is similar and you'd be unlikely to use them in the same chain.

Both have variable 'switched' input and threshold level controls, six fixed time-constant parameters (labelled 1 to 6, as on the Fairchilds that inspired the hardware MDEs) and fixed-frequency, switchable high-pass side-chain filters (set at 150Hz for the MDE; and at 200Hz for the MDEST). The MDEST has an additional Master output level knob, whereas the MDE's is hidden, and the MDEST has a 'Threshold Link' (which seems a bit confusing at first, as a single Threshold control applies to both channels, but in practice it does tighten things a bit).

Both models also have a GUI which is a painstakingly accurate representation of their respective hardware. The screw adjusters of the analogue originals don't all have a corresponding digital function, but some, along with the Magic Death Eye faceplate logo and the power lamp on the MDEST, have hidden software-only features. On the MDE, the logo switches in a 'Punch' mode (which changes the compression characteristics and adds a new graphic to the GR meter), and the screws between the input and threshold controls adjust Output level (-20 to +12 dB) and wet-dry mix (0 to 100 percent). For the MDEST, the MDE logo switches the upsampling rate from normal (Black) to x2 (light blue) to x4 (dark blue). The power lamp brings in the same Punch mode (now known as 'Laura', and indicated by the L meter label changing to the name). This time, the balance control screws adjust the harmonic content from the normal 50 percent (status lights orange) to 0 percent (green) and 100 percent (red). At present there's no wet/dry mix control on the MDEST.

The most significant difference between the two versions is that MDEST has a simple but interesting EQ section, which operates within the compression circuit. This includes a low-cut filter (off, 20 and 30 Hz), a switched LF boost (20, 40 and 100 Hz, with up to 5dB of boost in 1dB steps), and a switched HF boost (5, 12, and 18 kHz, also with 5dB of boost in 1dB steps). Right-clicking on the Low frequency control changes the low end to an elliptical filter, mono'd below the chosen frequency, and right-clicking on the High frequency control switches the EQ path from stereo to Mid or Sides.

To my mind there are basically two kinds of mastering processor: one has a complex but very flexible set of parameters, which you have to think your way through; the other, by reason of simplicity and lack of parameter information, you can only learn by listening. The MDE plug‑ins are analogue simple, so I approached evaluation of both in much the same way as the hardware Hendy Amps Michelangelo I reviewed earlier this year (go to https://sosm.ag/hendy-michaelangelo to read more).

I'll start with the original MDE. As the ratio is not separately adjustable, there are only really four parameters which you can use to change the character of compression: the input level, the threshold, the six preset time parameters, and a choice of three additional attack settings (fast, medium and slow). Getting things right is a matter of listening and tweaking, but on an attended jazz stem mastering project, with a lumpy, bumpily recorded acoustic bass and a female vocalist with a nicely textured mezzo voice, I found that I could achieve the desired effects pretty quickly. It was interesting to get the immediate responses of the musicians: the bass player thought his tone benefitted from a slight push on the input levels, and for most of the songs a medium attack and setting 3 or 4 seemed to do the trick, producing an articulate snap when needed and controlling any boom. The vocalist also liked the medium attack, with setting 3 sounding the most natural for ballads, but Fast and setting 1 preferable for up-tempo and scat singing.

Getting things right is a matter of listening and tweaking, but... I could achieve the desired effects pretty quickly.

When I started mastering stereo mixes, it was quite easy to 'over-control' things, even when using the classic combination of a slow attack and a relatively fast release (eg. setting 2). It seemed to grab just a bit too much, pushing middle images to the back a bit and dulling things down. Dialling back on the threshold to the extent that the gain reduction needles never even moved was a revelation. With such a minimal setting (and the compressor likely doing a bit more than the GR needles indicated) the MDE seemed to dance along with certain kinds of music, adding a seductive movement. I wasn't always entirely happy with the effect on the kick when mastering certain styles of music, even with the 150Hz side-chain high-pass filter engaged. But then I discovered a 'hidden' feature, not even mentioned in the early versions of the manual: clicking on the Magic Death Eye logo changes the background of the meter to the kind of pin-up that used to feature on the nose cones of American World War II bombers, and does something quite startling to the compression characteristic. It's called the Punch mode, and it is very nice. It allows much more kick to come through and overall gives the sound an additional punch and push. (I used this on a track for a forthcoming Faithless album I was just finishing off at the time.)

Clicking the logo engages Punch mode, which transforms the compressor behaviour in a wonderful way.

MDEST is clearly of the same bloodline, but it has been optimised for mastering. The compression is much more gentle, the high-pass filter has an extra 50Hz setting, and then there's the EQ. Putting this plug‑in in the processing chain for the first time brought a very familiar change to the music running through it. There wasn't much of a feeling of restraint, but there was a very nice additional density. Glue can become gloop very quickly with some analogue vari‑mu compressors I've used in the past, though. So when pushing things a little too hard and still liking the density but not the darkness, the hidden feature that allowed me to dial down some of the tube characteristics worked very well. The compressor action with the harmonic distortion reduced to about 30 percent is very seductive, and I've now used it on a lot of mastering projects.

The EQ section can add some lovely touches but needs a lot of careful listening. Although the manual reports them as a relatively steep 24dB/octave, the 20 and 30 Hz HP filters seemed to reach an unexpectedly long way into the lows, so sometimes I used the 20Hz one but I didn't use the 30Hz one much at all. I didn't use the low-boost, narrow bells at 20 and 40 much either, but that's simply because I had them just prior to an analogue chain, which was often the wrong place to use them. In a different setup, the 100Hz shelf at 1dB can add some nice juiciness to hard-sounding bass. The medium-wide HF bell boost got rather more use (in mastering, almost all at 1dB), as 12kHz was occasionally really nice for adding a touch of percussive clarity, especially when used on the Sides signal only. This added width without sounding like an artificial enhancement, and the 18kHz added enough gentle air that I sometimes used it despite having a nice analogue EQ, since it freed up an upper band on the latter.

At high input levels, it's possible to induce some controlled clipping, as indicated by the GR meters starting to flash red. Judging the amount is made easier by the ability to link the input and output controls (by ctrl-clicking one of them) so that you get a relatively unchanging monitoring level, though a higher input will also need a more moderate threshold. All of this allows some additional perceived level, and it works pretty well for that.

The Eyes Have It!

Hopefully, this review makes it obvious that I'm very taken with both versions of DDMF's Magic Death Eye. As a mastering engineer, if I could really only have one I'd choose the MDEST, whereas if wanting something for use on the stereo bus while mixing, I'd more likely choose the MDE. That said, there are some things in mastering that still seem to be to be done better with the MDE, and here's just one example. In the latest update to the MDEST, a Punch mode has been added. I didn't miss it previously, because I could and always did use the MDE for that. But even now, the two modes are not directly comparable, and a lot of the time I prefer the 'bigger' punch of the MDE. It's just as well, then, that there's a discount available that makes the prospect of buying both plug‑ins look rather more attractive!

There are many good modelled vari‑mu plug‑ins available, including the Pulsar Mu and the Kush Audio AR-1 and various Fairchild emulations, but there are none that offer quite the same character as DDMF's Magic Death Eyes.

In attempting to model two of the very rare Magic Death Eye compressors, DDMF have created some special plug‑ins.