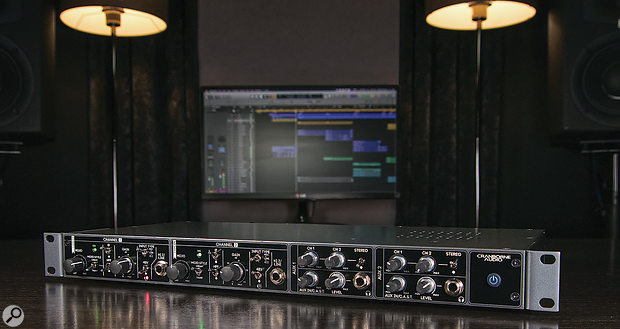 With added functionality and improved specs, this great preamp just got better.

When it comes to choosing mic preamps, some value clean performance, while for others 'character' is all. A couple of years ago, the clever people at Cranborne Audio came up with a way of delivering both in one design, with a very clever, controllable means of adding different characters that they called 'Mojo'. It was introduced in the superb Camden 500 preamp (reviewed in October 2018: go to https://sosm.ag/cranborne-camden500 to read more), which impressed the editors at SOS so much it was Highly Commended in our Gear Of The Year reviews.

Cranborne have recently built on this preamp design to create a new 1U rackmounting device, the EC2. The name is not an expensive London postcode, but rather it derives from 'Expander Camden 2-channel' and it is so described because the EC2 combines a pair of Camden preamps with two high-quality headphone amps and Cranborne's Ethernet-based CAST interface system. The CAST system and headphone amp design were introduced in the company's 500R8 500-series interface (reviewed in September 2019: https://sosm.ag/cranborne-500r8), and used in the 500ADAT (reviewed November 2019 issue: https://sosm.ag/cranborne-500ADAT). As the EC2's various individual elements have already been covered in previous reviews, I'll focus here mostly on how the EC2 works as a complete package.

Although the preamps in the EC2 appear much like the Camden 500 module turned on their sides, and sound every bit as good, the construction is very different. All the electronics for both preamps, the headphone amps, and the power supplies sit on a large motherboard. Subsidiary cards carry the front-panel controls and rear-panel connectors. Surface-mount components are used throughout, and an elaborate DC-DC converter section generates the internal power rails from an external 24V DC line-lump PSU, which connects via a locking 'Power-DIN' plug and has a standard IEC mains inlet. Unusually, the mains safety earth is also extended to the rack chassis via the negative side of the DC supply, and a marked screw on the rear panel is also provided as a chassis grounding terminal, if required.

An unplanned benefit of laying out the Camden preamp circuitry for the EC2's much larger circuit board was slightly improved intermodulation (IMD) and total harmonic (THD) distortion figures, both of which were already spectacularly good! Another small improvement, introduced in the Camden 500 module after serial number 500 and carried over into the EC2, improved the rejection of RF interference. 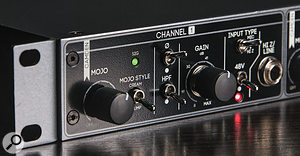 Cranborne's clever Mojo circuit can transform this brilliantly clean, quiet preamp into a wonderfully characterful colour machine.Operationally, the preamp sections have the same controls and layout as the Camden 500: a switched gain control, with 12 5.5dB steps, avoids gain-bunching problems and allows accurate matching of channels; there are toggles for polarity inversion, a high-pass filter (80Hz, first order), phantom power (with status LED) and input source (mic, line or DI). The Mojo section has another toggle to select its Cream or Thump modes and a rotary control for the amount, with a backstop switch to turn the facility off. A single multicolour LED indicates the signal level.

On the rear, each preamp has a single XLR for the mic input, with a toggle switch to select the remote CAST input instead (see below). On the front, a quarter-inch TRS socket caters for balanced line and unbalanced instrument DI connections. The preamp outputs are presented on both XLR and TRS sockets, and a ground-lift toggle completely isolates pin 1 of the XLR (but doesn't affect the sleeve ground of the TRS socket) when engaged. A brand-new facility for the EC2 is a TRS output socket labelled 'Link', which provides an actively buffered, impedance-balanced output right after the input selector, and before the gain stage and Mojo sections. This is intended to feed an instrument amplifier when using the instrument input, like a DI box, but can also be used for re-amping duties when using a line input. It's a very thoughtful, handy addition.

As well as the expected inputs and outputs, the rear panel plays host to the CAST ports and a handy 'Link' socket, which allows you to pass a 'thru' signal from the instrument input to your amp, or to re-amp mic/line signals.

The EC2's headphone amps are reassuringly quiet and clean, and they're very powerful, being able to deliver over 0.5W into each earpiece for headphone impedances between 32 and 220 Ω, the power delivery being at a maximum for headphones around 100Ω impedance, reaching a chunky 1.21W. I could drive all of my headphones (ranging from 32-250 Ω) to painfully loud levels without difficulty.

Each headphone amp has a front-panel quarter-inch TRS output, and the output volume is adjusted with a slim rotary knob. The other three knobs set the input source levels, with one for each preamp channel and one for an external stereo aux input. The long, thin control knobs look and feel good, but I'd have preferred some visual distinction for the master level controls.

The external auxiliary input comes either from a pair of rear-panel TRS 'Aux' sockets, or the 'CAST Out' return signal. The Aux sockets take priority, and plugging only into the left input provides a dual-mono signal. By default, the two preamp signals are fed to the headphones in stereo, with preamp 1 in the left ear and preamp 2 in the right, but a front-panel switch allows auditioning in mono (both preamps in both ears).

The EC2's headphone amps are reassuringly quiet and clean, and they're very powerful.

Not many two-channel mic preamps include headphone amps, but it makes a lot of sense for modern project-studio workflows and practices. For example, when working out the best position for placing a mic relative to an acoustic instrument it's essential to be able to listen as the mic is moved around; being able to plug headphones straight into the preamp to do that is remarkably convenient. But the real raison-d'être is to provide convenient, high-quality, latency-free, independent monitoring for up to two performers while recording. Each artist can listen directly to their mic, with or without a contribution from the second mic/instrument input channel, and with a mono or stereo backing track via the external inputs. The artist can also balance the input source levels and overall volume exactly as required from the front panel. In a small project studio or on location, these facilities make life so much simpler and easier. 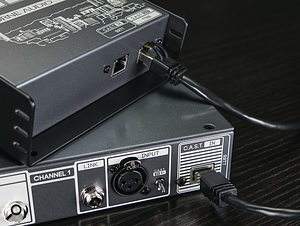 The CAST system allows analogue line and mic-level signals to be routed via low-cost Cat5e (or better) cables.CAST is an abbreviation of 'Cat5 Analogue Signal Transport' and is Cranborne's method for using low-cost shielded Ethernet cabling instead of traditional analogue multicore. The system uses the four twisted pairs and screen of an Ethernet cable (of up to 100m) to convey four balanced audio signals, two in each direction. Although Cat5 is mentioned in the name, shielded Cat5e, Cat6 or Cat7 cables can be used, and individually shielded Cat7 is preferred when working with mic-level signals. It's an entirely passive system — in the breakout boxes the RJ45 sockets are wired directly to the XLR/jack sockets — so it's a very cost-effective and convenient way of extending connections.

On the back of the EC2 are two CAST sockets, one labelled 'CAST In' and one 'CAST Out', although both actually carry two channels in each direction. The CAST Out socket carries the analogue line outputs from the two preamp channels, while its return signals are routed to the headphone amps, along with the stereo auxiliary inputs.

A typical application for this would be to connect an EC2 preamp directly to a 500ADAT or 500USB rack, for example, using just the one Ethernet cable, with a monitor mix from the rack being sent back to the EC2's headphone amps. On the input side, the CAST In socket allows remote input connections to the preamps, so an Ethernet cable can be used to link the EC2 to a CAST breakout box elsewhere in the room, serving as a snake and stagebox. The two return signals sent back down to the CAST breakout box come from the headphone monitor mixers of the two headphone amplifiers, at line level.

The longest shielded Ethernet cable I had to hand was only five metres, and the interface seemed to work perfectly well with line, instrument and mic-level sources over that distance, with any crosstalk between channels completely inaudible. However, for longer runs, and especially with mic-level signals, I'd probably want to use a Cat7 cable.

I was hugely impressed with the sound quality, technical performance and versatility of the Camden 500 preamp, and the EC2 version is every bit as good; it remains one of my all-time favourite preamps. It boasts not only superbly clean, quiet and dynamic performance as a straight preamp, but also an extraordinary ability, courtesy of the Mojo circuit, to become the most versatile, characterful preamp I know. The fact that the EC2 has slightly better technical specifications than the Camden 500 is a pleasant bonus, although I doubt anyone will hear the improvements unless working in an area with strong RF interference. The rackmount format actually makes it more desirable to me, and the inclusion of headphone amps that match the high-quality standards of the preamps opens a new world of convenience and practicality. I could see many more manufacturers following this idea in the future.

Overall, I have to say that the EC2 is one of the most desirable, capable, versatile and practical preamps I've used in a very long time. Given its phenomenal audio quality and flexibility, with two excellent preamps, two headphone amps, and the CAST interfacing options, it represents exceptional value for money, too. If you're in the market for a serious new preamp, you'd be mad not to put this at the top of your shortlist.

Audio interfaces aside, there aren't many dual-channel preamps with headphone monitoring. The Neve 1073DPX and the new Neumann V402 both have a single headphone amp to monitor the preamp outputs, but neither accept external cue mix inputs. The only preamp that immediately comes to mind with headphone monitoring and a cue mix input is the Focusrite ISA One, but that is only a single mic preamp with a separate DI channel on the side.

Cranborne currently offer two CAST breakout boxes: the N22 and the N22H. These are both rugged and compact stageboxes which can be used with the EC2 or the 500ADAT/500R8 racks to provide remote input and output connections. They can also be used as a pair to form a simple passive snake at each end of an Ethernet cable.

The N22 is entirely passive, with two input (transmit) channels on a pair of combi-XLRs, and two output (receive) channels on paralleled XLR and TRS sockets. The N22H appears almost the same, but it also incorporates a single headphone amp with volume control and paralleled quarter-inch and 3.5mm headphone outputs. It is powered by an internal 9V battery or external 9V DC power supply, and has only TRS (no XLR) outputs. A recessed toggle on the top switches the headphone amp's output between mono and stereo. Another toggle selects the input (the CAST return signals or the breakout box's input sockets). The headphone amp requires line-level input signals, and can't amplify mic-level inputs.

Cranborne have repackaged their brilliant Camden preamps into a dual-channel rackmount format, combined with a pair of powerful independent headphone amps to provide convenient and flexible latency-free monitoring.