Digidesign get into the 'virtual guitar amp' game with a plug–in that emulates a selection of classic amplifiers and cabinets in impressive detail. 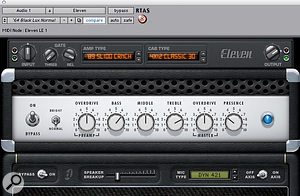 The name of Digidesign's Eleven amp modelling plug–in is clearly an affectionate nod in the direction of a well–known 'rockumentary', but there's nothing frivolous about the detailed way they've tackled the amp modelling. Everyone who has a similar modelling product claims to have revolutionised the process for even more realism, and Digidesign are no exception, being, as far as I'm aware, the first people to model speaker break–up as well as amplifier distortion.

As you'd expect from Digidesign, the plug–in comes in TDM, RTAS and Audiosuite versions, and is compatible with Pro Tools and Avid systems on Mac and PC, specifically Pro Tools HD Accel, LE and M–Powered along with Avid Xpress, Xpress DV and Avid DNA (Audiosuite only). Sample rates of 44.1 to 96 kHz are supported, and if you're running it in Pro Tools, version 7.1 or higher is required, with 7.3 or higher recommended. The plug–in will also run in a Digidesign Venue system (D–Show 2.0 or higher) and authorisation is via iLok, which is not included in the package.

Send In The Clones

Digidesign tell us the plug–in was created using a proprietary 'amp cloning' technique to model a selection of A–list amplifiers from the likes of Vox, Marshall, Mesa Boogie and Soldano (see box overleaf for list), as well as a couple of home–cooked models. However, as with most similar modelling products, Digidesign point out that there is no connection with or endorsement by any of the companies mentioned.

Digidesign enlisted the help of studio engineer John Cuniberti to oversee the setting up and miking of the original amps. Every stage of the amp's signal path was, apparently, modelled, though I can't say if that goes right down to component level or not. Variables that are modelled include power–amp sag, speaker cone break–up, cabinet resonance and other subtle artifacts that contribute to an organic–sounding amp model. Convolution technology was used to capture the behaviour of the speaker/cabinet/mic combinations as accurately as possible, using an impressive set of studio mics, including a Royer ribbon model, set up both on and off axis. Eleven even purports to model the way the power amplifier interacts with the speaker and cabinet at different playing levels. A fader controls the amount of speaker cone break–up and goes from zero to more than might occur in normal use. Subjectively, this makes the distortion sound a hint more 'splattery' and it brightens up the high end.Most of the time I had it turned well down or even right off.

As you switch models, you're greeted with a control panel that closely resembles the original amplifier, where the controls have been designed to work in the same way — so, in theory, you can dial in the same settings as you do on the real thing and get the same result. All the speakers associated with the amp models on offer are available on a separate pull–down menu, so you can combine any amp with any speaker, though there's no Link button for automatically loading the cabinet associated with a particular amp type. Yet another menu selects the mic model, while a virtual toggle switch selects on– or off–axis miking. Unlike some competing products, there are no stomp boxes and no effects rack, though you do get a noise gate with adjustable threshold and release to tame the background noise on those heavily overdriven sounds. There are also input and output gain controls, each with a green signal–present and a latching red clip LED to enable you to optimise your gain structure. 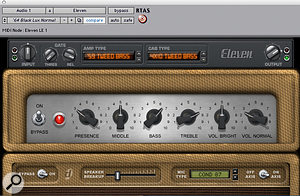 The Eleven interface presents the same controls as are found on the original amp.To my ears the amp models sound more accurate than most, with plenty of character and good touch responsiveness, though, in common with many American guitar products, I found the speaker emulations to be a bit on the gritty side. I was also least impressed with the Fender amp models when wound up, as they seemed to sound rather 'spongey' and took on some unpleasant overtones that I don't recall hearing from the originals.

The generally bright tonality works fine for the heavy shred sounds, but for classic Euro rock it is worth experimenting with the speaker and mic types. For example, moving the mics off–axis tames the brightness to a useful degree, while the ribbon mic setting is particularly smooth and warm, so there's quite a lot of tonal scope if you're prepared to juggle the mic and speaker cabs that you team with the amp. You can also get good results by putting a hardware distortion pedal in front of the input, although you need to be careful not to produce too much noise build–up when working with high–gain sounds.

The use of convolution to capture the speaker characteristics lends a solidity to the low end that some models miss, but unless you're a stickler for authenticity (in which case Softube's Vintage Amp Room or Wave's Guitar Amp are the obvious competitors), you can get results that are often just as musical from other amp modelling plug–ins, many of which also throw in a good selection of stomp boxes and effects. The ability to select intermediate mic positions or dual mic combinations would also have added to its tonal flexibility. Overall, though, Eleven is impressive for the accuracy of its modelling. I still prefer the results I get from miking my amplifier, but where that is impractical, Eleven covers most genres.

There are plenty of amp modelling plug–ins around at the moment. If you're after authenticity, the closest rivals to Eleven are Softube's Vintage Amp Room and Waves' GTR. Otherwise, you could also consider products such as IK Multimedia's Amplitube, NI's Guitar Rig and Line 6's Gearbox Plug–in, which offer a wider range of tonal possibilities because they include a range of effects as well as the amps and cabinet models.

Eleven is a simple and generally good–sounding amp modelling package, but you'll need to add your own effects.