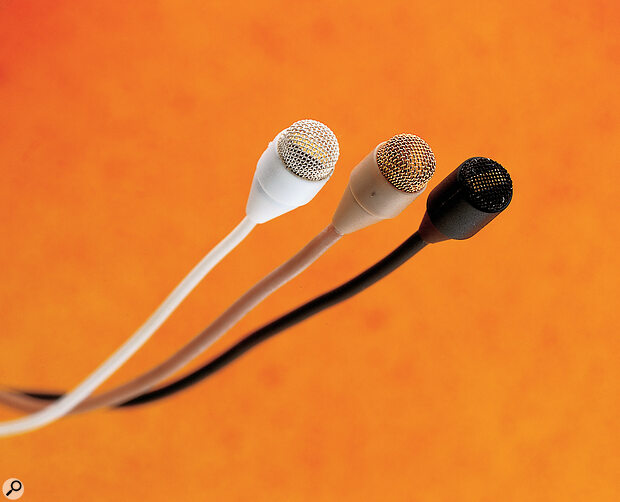 Paul White dons his reading glasses and sets out to test a miniature mic with a big sound.

When it comes to studio mics, it often seems that size matters — clients are impressed by big microphones. In certain applications, though, it's small mics that have the big advantages. The Danish Pro Audio microphone under review here is so small that a conventional mic cable would dwarf it, so instead it comes permanently fixed to the end of a miniature cable only a couple of millimetres thick. This terminates in a miniature MicroDot gold connector that plugs into its seemingly massive phantom power adaptor, which is built inside a conventional XLR plug. It can also plug into most professional radio mic systems.

Miniature microphones are traditionally used for theatre and broadcast work, often in conjunction with radio transmitters, and that seems to be the prime market for these models, but a number of musicians have experimented with using them for recording, with encouraging results. In live recording situations, where minimising spill is a serious concern, miniature mics such as these can be clipped directly to the instrument, rather than being positioned at a distance, with the advantage that if the player moves around, the mic maintains its position relative to the instrument.

The omni (omnidirectional) pattern DPA 4060 is the most sensitive model (20mV/Pa) in a series of three similar mics from Danish Pro Audio, and uses a 5.5mm electret capsule with a vertical diaphragm. Because live work often involves less than ideal conditions for traditional microphones, these models are designed to resist humidity and to minimise wind and pop noise. Obviously, with a mic the size of a lentil there's really no place to put an effective external pop shield!

Two different protection grilles come with each mic, and these may be interchanged to affect the frequency response of the mic, ostensibly to compensate for mounting positions. For example, if the mic is mounted on the chest of a speaker, it will require a 10dB boost at 12kHz to maintain a neutral sound. The longer of the two grilles provides this response. Fitting the other grille provides a nominally flat response, with a rise of around 3dB at 12kHz.

Though tiny, the DPA 4060 has a very respectable noise performance, with self‑noise of 23dBA. Levels of up to 120dB can be handled, with the distortion rising to 1% at the limit of its range, providing the user with a dynamic range of 97dB. There's a further 13dB of headroom above this before clipping occurs.

If a mic of this size can really deliver the quality of a full‑size microphone, the recording implications are significant, not only for live work, but also in the studio, where several acoustic musicians may want to play together in close proximity. With conventional microphones, phase problems due to the use of multiple mics arise, not to mention the degree of spill that invariably occurs. Even though omni mics don't have the off‑axis rejection of cardioid models, if you can get them very close to the sound source the inverse square law makes it possible to get a better ratio of wanted sound to unwanted sound, and should reduce phasing problems into the bargain.

Of course, if you get a mic too close to a sound source, you may change the sound, because most musical instruments vibrate in different ways over different parts of their surface. By close miking just one part of the instrument, you risk capturing a sound that isn't representative of the instrument as a whole. Even so, providing you can get close to the sound you're after, the compromises you have to accept when close miking may be less serious than the ramifications of spill and multi‑mic phase problems, so purist acoustic laws suggesting that very close miking is inaccurate in most applications shouldn't deter you from trying.

When recording folk music or bands with a predominance of acoustic instruments, it's often the stringed instruments that are the hardest to mic up, not least because they're relatively quiet compared to wind instruments or percussion. With that thought in mind, I set about clipping the mic to my acoustic guitar. Even though many acoustic guitars come with piezo pickup systems, few people seem to like the sound well enough to record in that way.

...there are places this mic can boldly go that regular mics just can't reach.

This mic certainly sounds a lot bigger than it is, and it seems to combine the sensitivity and openness of a capacitor mic with the slightly more punchy mid‑range projection of a good dynamic model. Clipped to the soundhole of an acoustic guitar, so that the capsule is about one inch away from the edge of the soundhole, the result is far more signal than you get with conventional miking, yet the tone is warmer and more natural than you usually get with bridge transducers. The sponge padding on the clip also works well in decoupling mechanical noise from the mic, so that the guitar handling noise is really no worse than when you're miking conventionally. However, I would suggest anchoring the cable at some point, as tapping the cable can transmit sound back to the mic. The only thing you have to be careful of is that if the mic capsule is located too close to the soundhole, not only do you get a little additional bass end that you probably don't want, but the tone also changes as the player passes their hand over the soundhole. This sound change is real — the mic's only picking up what is actually there — but with a more distant mic the sound from all over the guitar body will integrate and mask this local effect.

The mic also produces a surprisingly full vocal sound, with little tendency to pop, and for doing quick demo recordings of singer/guitarists, you can get quite acceptable results by clipping the mic to a lapel (or fold of T‑shirt, as is more likely to be the case!), then adjusting the balance by moving the mic closer to or further away from the guitar. Because the mic is so small, the off‑axis response is particularly good, so it doesn't matter too much which way the mic is pointing.

Most things sound nice through this mic, but (and I know you'd want me to try this!) I also clipped it to the end of a didgeridoo, where it produced loads of output, with plenty of brightness and detail. This would be a great (if not entirely accurate) way to mike the instrument live, but even in the studio I can see a combination of the DPA 4060 close up, and a conventional mic further away, working quite well. I've also heard reports of the mic producing good results on violin, and after my experiences with the acoustic guitar I can well believe it.

Paying around £250 for what looks like a black lentil stuck to the end of a thin strand of liquorice might go against your instincts, but there are places this mic can boldly go that regular mics just can't reach. If you have separation problems when recording acoustic instrument ensembles, but you can't afford to compromise on sound quality, the DPA 4060 is one mic that just might save the day.

Though designed primarily for broadcast and theatre work, this little mic has a number of genuine uses in the studio and for live recording.