It’s not easy to create an analogue multi–band compressor that competes on quality and price, but Drawmer show us it can be done.

Drawmer have been making audio processors for over 30 years, yet their first product, the DS201 noise gate, set a standard that others still try to match today. Alongside an impressive current list of around 30 hardware and four software products, the Drawmer web site lists 18 discontinued designs, including the DC2476 digital mastering processor (http://sosm.ag/drawmer-masterflow), the S3 multi–band stereo tube compressor and the Three–Sum band–splitter (http://sosm.ag/drawmer-threesum). I singled these particular products out for special mention, since they’re the conceptual ancestors of the subject of this review, the ingenious 1973 three–band stereo FET compressor.

For mastering, I often use the fabulous DC2476 ‘Masterflow’ in preference to a stack of plug–ins. Being able to target different dynamics processing on precisely defined spectral elements within a mix is an incredibly powerful tool, and I’d be quite lost without it! The S3 compressor translated the same multi–band dynamics concept into the analogue domain with a ‘no–compromise’ design that combined three complete optical compressors in a large 3U rackmount box, housing 10 valves and an electronic oven to maintain the three light–dependent resistors at the optimum temperature for calibration stability. The Three–Sum repackaged the S3’s band–splitting and –recombining electronics into a compact 1U device to allow users to integrate any combination of their own external dynamics processors.

The idea of multi–band processing remains popular in the digital world but, expensive mastering processors aside, it seems less popular in the analogue domain, probably in part due to the cost of production. The S3 and Three–Sum were discontinued some time ago, but Drawmer’s new 1973 is, essentially, a more cost–effective version of the S3 (which Drawmer tell me was an unanticipated hit with European dance–music producers!). As well as clearly re–presenting the ideas and practical benefits of the aforementioned products, the 1973 derives some operational aspects and styling cues from still–popular classic Drawmer compressors, such as the 1960 and 1968.

As the name makes clear, the 1973 employs FETs for the gain–adjusting elements — it’s a completely new gain-cell design not used on any of Ivor Drawmer’s previous compressors. The active crossover filters and gain stages are built around NE5532 and TL072 op–amps. Despite the lack of tubes, the overall signal path design and operational controls are very similar indeed to that of the S3.

Housed in a 2U rackmounting steel case extending about 250mm behind the rack ears, and with an aluminium front panel, the 1973 is instantly recognisable as a Drawmer product, thanks mostly to its white–on–black control legends and graphics combined with bright yellow pointers on the smart fluted Sifam knobs. A pair of large, illuminated VU meters dominates the right–hand side above the output controls, while the three compressor sections are laid out in a wonderfully ergonomic and intuitive way across the rest of the panel.

The rear panel features four XLRs for the electronically balanced stereo line inputs and outputs, along with the ubiquitous IEC mains inlet and a voltage selector switch (115/250 V AC). Internally, a compact toroidal transformer feeds a linear power supply section, hosted on the right–hand side of a large printed circuit board that covers the entire chassis floor. Two daughter PCBs carry the front-panel controls and gain–reduction meter electronics, with all the circuitry being constructed using conventionally sized components. Sealed relays are used for bypass and band–muting functions, and I counted no fewer than twenty separate trimmers, too, for calibrating the various gain stages and side-chains!

Operating the 1973 is straightforward, and aided considerably by the clear and logical layout of the front-panel controls. Each of the three independent compressor sections is dominated by its large centrally placed threshold knob, which spans a wide signal–level range of +26 to –32 dBu. Immediately below the threshold control is a trio of smaller rotary controls to set the attack, release and make–up gain. A three–way toggle–switch is also provided to mute or bypass each individual compressor section (orange and red LEDs indicate the mute and bypass status, respectively). This facility makes it easy to check what each section is contributing to the overall dynamic control of the input signal.

The attack and release controls are both six–way rotary switches, with the attack range spanning a very fast 0.2 to 50 ms, and the release offers three fixed time–constants of 80ms, 300ms or 1s. There are also three programme–dependent (automatic) release–time options, labelled F (fast), M (medium) and S (slow), and these can range between 0.1–0.5 seconds, 0.3–2 seconds, or 0.5–5 seconds, respectively. The make–up-gain control is another conventional rotary pot, this time covering a gain range of –10 to +20 dB, and sitting immediately above these three smaller rotary controls is a horizontal bar–graph meter of red LEDs. This indicates the section’s current level of gain reduction, and the meter can display up to 20dB gain reduction.

Stereo in, stereo out: all the band–splitting and band–combining shenanigans are taken care of internally.All of the rotary controls described so far have black caps, but sitting between the three dynamics sections, and positioned in line with the threshold controls, are two grey–capped rotary controls. These are made distinct from the others because they adjust the crossover frequencies of the multi–band filters. The panel graphics neatly separate the three compressor sections, with these crossover filter controls sitting obviously between the bands. The crossover filters have gentle 6dB/octave slopes, with the low/mid crossover being adjustable between 60Hz and 1.4kHz, and the mid/high crossover spanning 1.4 to 14 kHz.

Moving now to the right–hand side of the front panel, just below the meters is a master output level control (with a ±12dB range) and a wet/dry mix control to cater for parallel processing effects. A pair of toggle–switches to the left of the output controls configures the VU meters between normal or fast transient peak–reading modes, and pad the 0VU level by 10dB to make it easier to view the levels when working with very hot signals (so 0VU equates to +14dBu instead of +4dBu). A second pair of toggle–switches on the right-hand side provide a full relay hard–bypass of the entire unit (with red status LED), and turn the mains power on and off (also with a red status LED).

Two more toggle–switches, one each in the low– and high–band compressor sections, are located to the left of the respective bands’ threshold controls. The low–band switch is marked ‘Big’, and this engages a 100Hz, 6dB/octave high-pass filter in the side-chain which reduces the band compressor’s sensitivity to very low frequencies. This makes it less enthusiastic about clamping down on very low–frequency components (kick–drum hits, for example), with the result that the very low end becomes subjectively bigger and more powerful while the upper bass is still being dynamically constrained. It’s exactly the same kind of side–chain filtering facility that’s found on many conventional full–band compressors, and it works in the same way here. The equivalent high–band compressor switch is labelled ‘Air’, but instead of employing a side–chain filter, this reintroduces some of the original signal’s HF back to the output. The idea is to restore some of the ‘air’ and transient clarity that’s often lost during compression. The wet/dry control has a similar effect, of course, but that affects all bands, whereas the Air switch just affects signals in the high–band section.

Some conventional full–band compressors offer several different side–chain filter and EQ responses to help focus which parts of the spectrum the compressor is required to react to the most (or the least), and many compressors have external side–chain access points to allow elaborate external equalisation to be employed. However, while side–chain EQ can emphasise or de–emphasise certain frequency regions and thus influence the compressor to apply more or less gain reduction to signals in those different regions, when gain reduction is applied it inherently alters the level of the entire signal spectrum.

In contrast, a multi–band compressor allows separate parts of the audio spectrum to be processed entirely independently. This allows different attack and release times, different ratios and amounts of compression, and different make–up gains, the last of which can serve as a form of relative EQ, too. This extra level of versatility and finesse can make a surprising difference, particularly when processing a complete stereo mix or stereo loop. For example, high–frequency transients can be controlled precisely with a high ratio and fast attack and release characteristics, while low–frequency signals can have slower release times to prevent the compressor pumping or trying to track the LF waveform, and the mid–range can be polished with a gentler ratio and a slower attack to let snare transients really punch through.

Checking out whether the crossover points are dividing the spectrum in the most useful way, what each compressor section is doing, and whether they are correctly optimised is easy with the ability to mute or bypass each band. Similarly, the three gain–reduction meters make it clear what’s going on moment by moment, and the output meters and level overall control allow proper gain structuring. The +10dB mode is very handy when using the 1973 as an external processor in conjunction with a DAW, when the mix levels could be close to the digital peak. 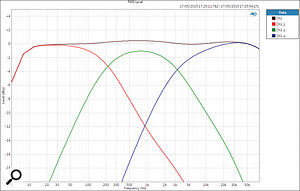 An Audio Precision plot showing the overall frequency response (black line), and the contributions of each of the three separate compressor bands with the crossover filters set to 200Hz and 3kHz. The very mild mid–range lift evident in the plot is due to the mid–band make–up gain control being fractionally too high!To that end, my Audio Precision bench tests revealed that the 1973 can cope with +26dBu on its inputs, while returning up to +25dBu at the outputs, so it’s perfectly suited to working with high–end converters calibrated for 0dBFS = +24dBu. My measurements broadly matched the published specifications, with channel crosstalk around –88dB at 10kHz and THD+N at +4dBu of 0.06 percent, increasing to around 0.45 percent at +20dBu. The signal–to–noise ratio (ref +4dBu) was 88dB (A–weighted, 22Hz–22kHz), while the frequency response was –3dB at 7Hz and somewhere in excess of 80kHz.The flatness of the overall response is critically dependent on the gain make-up settings of the individual sections.

The 1973 three–band stereo FET compressor is a well–designed product, which combines three excellent FET compressors with versatile control ranges and effective crossover filtering. It allows a level of precision and flexibility in programme dynamic control, which is unobtainable with full–band compressors, and very cost–effectively. If you’re looking for something a little different in outboard compression, the 1973 warrants a serious audition.

While the likes of Tube-Tech and Maselec make high–end mastering multi-band compressors, these have a high price tag, and more modestly priced multi-band compressors are few and far between. SM Pro made one for the 500–series format, but since that company’s acquisition by Harman Group it’s not clear that they have plans to continue production. If you search hard, you might also be able to find a second–hand bargain like Focusrite’s Platinum MixMaster, which featured a good three–band stereo compressor — or indeed a second–hand Drawmer S3.

This is a cost–effective multi–band analogue FET compressor, with wide control ranges and superb audio performance, making it a worthy, yet more affordable, successor to Drawmer’s S3 valve multi-band compressor.