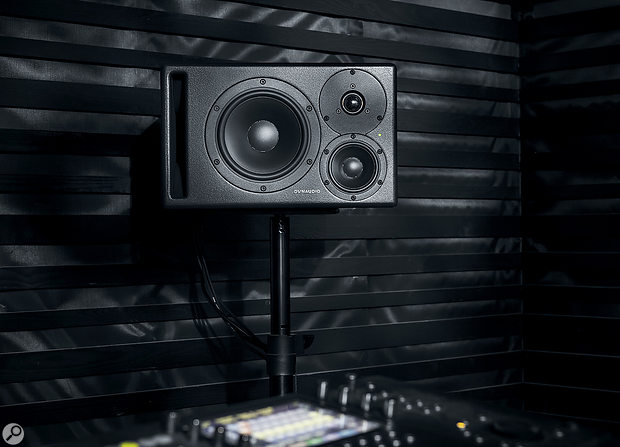 Dynaudio's premium Core series grows apace with the launch of a new three-way model and a powerful subwoofer.

Dynaudio's new Core series is growing with impressive speed. We reviewed the Core 59 in October 2019, the Core 7 in December, and soon after a pair of Core 47 monitors and a Core Sub landed on my doorstep with an impressively mighty thud.

Designed to replace the now-discontinued Air range of professional monitors, the Core-series are said by Dynaudio to be able to outperform their Air equivalents in all respects. Given the eventual breadth of the Air series it would seem that both studio engineers and reviewers have much to look forward to in the coming years.

The Core 47 shares its dark-grey cabinet, front-facing port exit and exposed drivers with its series siblings, as well as the rear–panel amplifier, control block and analogue and digital inputs. Employing the same 150W treble, 500W mid–range and 500W bass Pascal Class-D amplification setup as the Core 59, the Core 47 features a separate left- and right-handed driver layout that echoes that of the LYD 48.

Although comparatively compact for a sub with its level of performance, the Core Sub is a much more substantial unit, weighing in at 48kg. Twin 500W Pascal Class-D amplifiers, controlled by the Core-series DSP, power two pairs of side-facing 9–inch bass drivers, each housed in individual sealed compartments. The Sub, which has the same rear–panel layout and inputs as its companions, is designed to partner with any of the Core–series monitors, allowing you to securely stack the Core 47 (or 7 or 59) on top of it, to form a physically impressive four-way monitor tower.

In the Core 47, audio frequencies above 5.25kHz are the domain of Dynaudio's soft-dome Esotar Pro tweeter, developed from the Esotar 2 found in the Air series specifically for the Core monitors. As has been noted in previous Core-series reviews, the Esotar Pro is fitted with Dynaudio's Hexis system, a dimpled structure that optimises the airflow behind the tweeter's soft dome, helping that unit to deliver an extended, highly linear frequency response with a wide dispersion characteristic, thus adding precision and detail to the stereo image.

The Core 47's all-new 4-inch mid–range driver handles the frequency band between 475Hz and 5.25kHz, and features a proprietary one-piece MSP (Magnesium Silicate Polymer) cone, an aluminium voice coil and a neodymium magnet system. Frequencies below 475Hz are the...