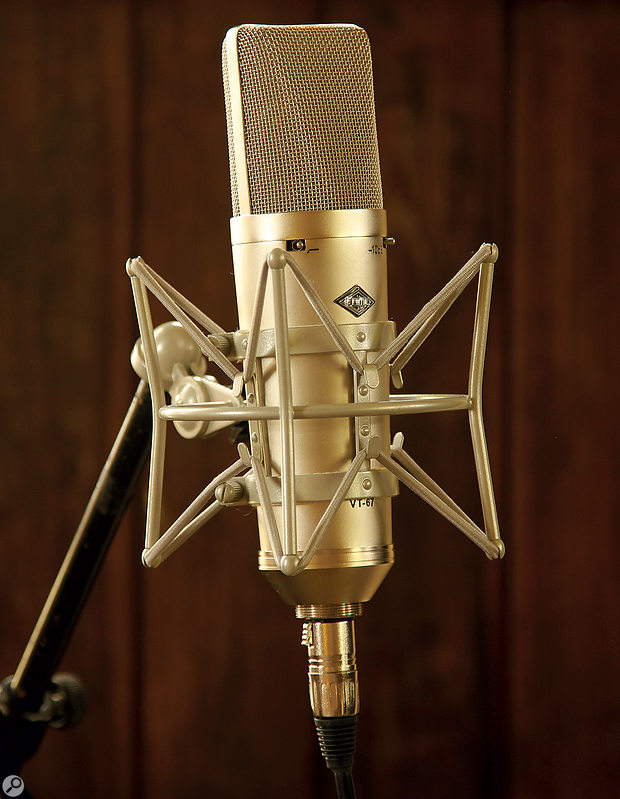 Fame's homage to a German classic gives you vintage vibe on a budget.

The Fame VT‑67 Pro is a surprisingly affordable package comprising a valve microphone with power supply, a seven-pin XLR cable and a wire–frame shockmount, all presented in an aluminium flight case that houses a separate, lined wooden box for the microphone itself. 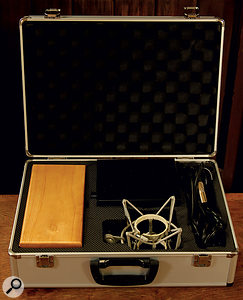 The VT‑67 ships in a hard carry-case, along with a wooden box, shockmount, power supply and XLR cable.While built in China to keep costs down, there's more to this microphone than meets the eye, as it includes a Lundahl output transformer and good–quality circuit parts. Its dual–diaphragm capsule can be switched to provide nine polar patterns ranging from omni to cardioid via figure-of-eight, with a couple of intermediate patterns between each. There's a -10dB pad switch to accommodate loud sources and a low–end roll-off switch — both mini toggles mounted below the basket.

Structurally, the mic follows similar lines to many other side-address studio mics, most of which tip a nod in the direction of Neumann's classic models (there's a rather evocative diamond-shaped Fame logo denoting the front of the mic). All the metalwork is finished in satin silver. Unscrewing the retaining ring at the bottom of the body allows the tapered sleeve to be slipped off, exposing the circuity, which is based on an Electro-Harmonix 6072A valve mounted in a ceramic socket and secured by a strap around its mid section. 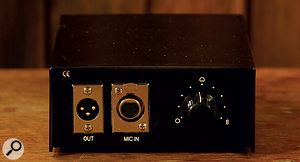 As well as powering the microphone, the PSU houses the nine-position dial for selecting the polar pattern.The power supply is built into a plain but tidy steel box with a seven-pin mic-input XLR and a three-pin XLR out on the front panel, to the left of the nine-way rotary pattern–selector switch. On the back panel is a voltage selector for 230 or 115 V operation, an IEC mains inlet and an illuminated power switch.

There's nothing too unusual about the technical specs here: frequency response is quoted as being 20Hz-20kHz, with the graph showing it as -6dB at 20Hz with a couple of presence humps higher up: a very slight one at around 2.5kHz and a slightly higher one of maybe 4dB at around 12kHz. There's also a broad, shallow scoop of a dB or so centred at around 150Hz. Sensitivity at 1kHz is 20mV/Pa, while the A-weighted self–noise figure is 16dB — quite respectable for a valve microphone. With the pad switched in, the maximum SPL is 144dB, so loud guitar amps are not going to frighten this microphone.

Apparently the design brief was to create a mic that sounds smooth but also has plenty of character, something that valves and transformers tend to enhance under the general banner of 'warmth'. Suggested applications include male and female vocals, acoustic instruments, percussion, piano and electric guitar.

Being a valve microphone, the VT‑67 should be left powered up for a few minutes to stabilise before use. Tested on male vocals in its cardioid configuration, the mic comes out just on the warm side of neutral, so although there is some generated warmth, it isn't overdone.

As always with vocals you need to match the mic to the individual vocalist, but the fairly subtle presence peaks should mean that this mic can be used on a reasonably wide range of vocal timbres without harshness intruding. However, I did find the result slightly on the bright side when miking an electric guitar amplifier, though a little top-cut EQ soon brought it back into line. The VT‑67 probably wouldn't be my first choice for guitar amp miking but it can certainly be coaxed into giving decent results in that role.

On acoustic guitar the VT‑67 delivered a well-balanced sound with the right amount of body and zing...

On acoustic guitar the VT‑67 delivered a well-balanced sound with the right amount of body and zing, so once you've taken the time to find the best placement for the mic, you won't need to do much else to record a very respectable acoustic guitar sound. Testing the other patterns confirms that the figure-of-eight mode offers good rejection of sound when you get to 90 degrees off-axis, and the omni is useful where you need a more open, roomy sound.

In all, the VT‑67 works very well as an all-rounder, adding a subtle dash of flattery to everything it is used on. While it might not equal the performance of a vintage European classic, those mics tend to be 10 times the price — and sometimes a lot more! Given that it offers multiple patterns and comes in a serious case complete with shockmount, the VT‑67 really does offer outstanding value.

While there are several valve mics that come in under the £800 mark, this is one of the least costly multi-pattern valve mics I've yet encountered.

A good-value all-rounder that adds a nicely subtle dash of valve flavouring to any recording.