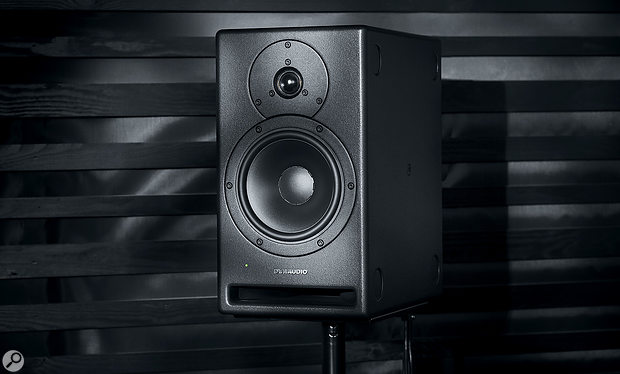 They may look old-school, but Dynaudio's newest nearfields are packed with cutting-edge technology.

Danish loudspeaker manufacturers Dynaudio have a long and very successful history of building hi-fi loudspeakers dating back to 1977, and the company expanded into pro-audio monitors in the early 1990s. Although acquired by the Chinese high-tech manufacturers Goertek in 2014, business has continued as usual under the brand's new owners, with substantial further investments in R&D facilities including a state-of-the-art speaker testing and measurement facility called 'Jupiter': a huge 13–metre cube containing a pair of robot arms that position a speaker in front of an array of 31 microphones to measure its performance over a 180–degree arc in one go.

For over 15 years Dynaudio's flagship professional monitor range was the DSP-controlled Air series — selected as the preferred studio monitors in BBC Radio's studios, among others! More recently, the LYD range, introduced in 2016 and reviewed by my colleague Phil Ward (SOS November 2016 and December 2017), took up the mantle of Dynaudio's DSP-controlled quality monitors.

However, at the NAMM exhibition in America earlier this year, Dynaudio introduced another new range of professional active monitors raising the bar higher again. At launch, there were two models in its portfolio: a three-way design called the Core 59 (the name stemming from its combination of 5-inch mid–range and 9-inch bass drivers), and the smaller, two-way Core 7 (which has a 7-inch bass/mid driver). It is this latter model that I'm reviewing here, the three–way having already been given the once-over by Bob Thomas in the October 2019 edition. By the time you read this, however, there will be two more models in the range: the Core 47 is a smaller three-way monitor, while the Core Sub is, er, a subwoofer.

In essence, the new Core series replaces the highly regarded but discontinued Air series of professional monitors. Both models feature analogue and AES3 digital inputs, along with very powerful Class-D power amplification and, of course, advanced DSP signal processing. They also have the distinction of being the first loudspeakers Dynaudio have developed using their impressive new Jupiter test room facility.

Not surprisingly, the company's development of both driver and DSP technology has seen incremental but worthwhile performance gains in all areas since the Air series was introduced. The results, Dynaudio say, allow these new Core models to outperform the equivalent next-higher models in the old Air series. So the new Core 7 — which is a similar size and spec to the discontinued Air6 — is said to exceed the performance of the Air 12. That is an impressive declaration.

Dynaudio also state that the Core series has been designed with both longevity and consistency in mind, knowing that their professional clients expect equipment to remain in continual service for decades. They also want to be able to mix-and-match speakers from their equipment stores without worrying about stereo matching issues. So the Core loudspeakers have been designed for a minimum 20-year working life (just like the Air series, actually), and the manufacturing tolerances guarantee matching within 0.2dB for every speaker. For that reason most outlets are selling the Core 7 as individual speakers, rather than in stereo pairs — simply because pair matching is unnecessary!

The Core 7 is the compact model of the current duo, being directly comparable in size to the LYD 7, but performing to even higher standards and costing around 50 percent more. It is intended for nearfield monitoring in recording studios, edit...