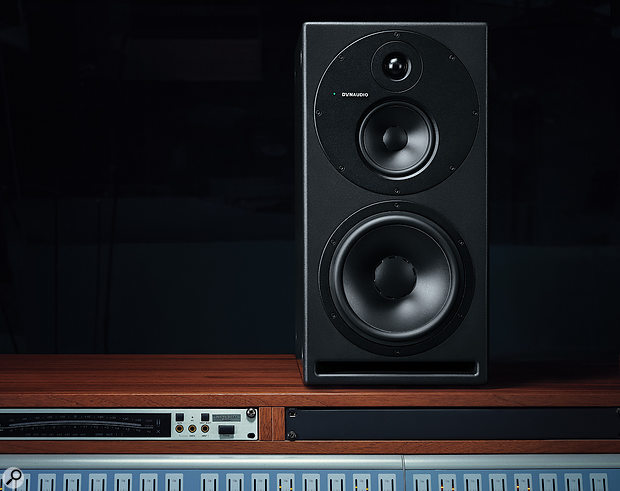 Modern simulation software has given loudspeaker designers the ability to model and evaluate new driver and cabinet design, construction and materials to an absolutely extraordinary level of detail. However accurate a resulting model may be, what really counts is its real-world performance which, up until recently, was always carried out in an anechoic chamber. However, the development of loudspeaker testing based on impulse responses has made it possible to simulate anechoic conditions by shutting off the measurement microphone immediately after it has picked up a broadband impulse (a click-like sound that contains all audio frequencies) but before any room reflections arrive back at the microphone, a technique that is employed by Danish loudspeaker manufacturers Dynaudio in the heart of their R&D centre in Skanderborg: the 13m, three-storey cube that is the Jupiter Free Field Impulse Response Measurement Room.

Inside Jupiter, the loudspeaker (or a multi-loudspeaker system) being tested is hoisted into the centre of the space on a robotic crane arm that can also rotate the unit under test through 360 degrees in the horizontal plane. A second robotic structure — a gigantic array of 31 measurement microphones arranged along a 180–degree arc at six–degree intervals, which rotates in the vertical plane — allows Dynaudio engineers to calculate the spherical radiation of a loudspeaker using multiple impulses, time-selective measurement techniques and the rotation of both the arc array and the test unit.

The first studio monitor to be developed entirely within the R&D centre and the Jupiter facility is the recently released Dynaudio Core 59, a three-way active studio monitor and the largest member of the company's new Core Series.

A Dynaudio Core 59 is not exactly an insubstantial object, the solid bulk of its 280 x 380 x 550 mm dark-grey enclosure weighing in at a hefty 24.6kg. It is a true three-way, Class–D–amplified active monitor whose 5–inch mid-range and 9-inch bass drivers are reflected in its model designation. The Core 59's drivers, each hand-made in Dynaudio's factory in Skanderborg, are all new, having been developed specifically for the Core 59.

Dynaudio's commitment to the soft-dome tweeter is once again in evidence with the Core 59's Esotar Pro, which incorporates aerospace-derived airflow–management techniques in the design of its neodymium magnet, internal venting and damped rear chamber, in order to further reduce back pressure on the rear of its diaphragm. Perhaps the most ingenious piece of the Esotar Pro's design is the Hexis, an inner dome that sits behind the soft-dome diaphragm and whose carefully dimpled surface has been engineered to optimise the tweeter's internal airflow, the idea being to further smooth its overall frequency response and eliminate unwanted internal resonances.

The Core 59's 5–inch mid–range driver is fitted with a Dynaudio Magnesium Silicate Polymer (MSP) cone, coupled to an aluminium voice coil and driven by a neodymium magnet. In the Core 59 this driver's wide operational frequency bandwidth allows it to be crossed over at 312Hz and 5.1kHz, which means that one driver can handle the mid–range, removing any risk of crossover-based distortion in this vital part of the frequency spectrum.

An 18-month study into subwoofer driver technology is said to have informed the development of the Core 59's long-excursion 9–inch bass driver, which features a copper voice coil on a glass–fibre former and ceramic magnets, with amplification coming from a 500W Class–D amplifier. Two additional Class–D amplifiers drive the treble (150W) and mid–range (500W) drivers.

The Core 59 also incorporates Dynaudio's 221-Technology (first seen in the discontinued Air series), in which the tweeter and mid–range driver are mounted together in a self-contained pod with a circular front baffle. This pod can be rotated in order to offer various cabinet orientations, from the vertical three-in-line layout, through the horizontal side-by-side orientation, to an 'upside–down' vertical position in which the bass driver is positioned above the tweeter. This enables the Core 59 to cope with LCR or other multi-channel and Dolby Atmos studio monitor systems. So-called soft rubber-like Hover Pads provide a degree of physical isolation from the monitor's support surface. Integrated Vesa mounts and a dedicated DSP setting for soffit mounting add to the Core 59's positional flexibility.

Class At The Back 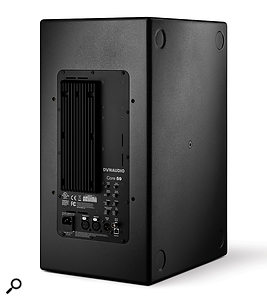 The rear panel is dominated by a large heatsink, alongside which are the slide–switches for placement compensation and I/O modes.The rear surface of the Core 59's cabinet is occupied by a large metal panel that incorporates a large finned heatsink. The Core 59's Class–D amplifiers are supplied by Copenhagen-based Pascal Audio. Their vision of a world in which listeners who want it loud get great sound, at any volume, from compact lightweight amplifiers that last forever would certainly seem to fit well with Dynaudio's expectation that Core–series monitors will have an operational life of 15-20 years — just like the preceding Air series, which launched in 2002.

Two of the three back-panel XLR connectors handle the monitor's balanced analogue and AES3 digital audio inputs, with the third XLR providing an output that can be used to link to another Core 59. A slide switch is used to select between the left and right channel of the AES3 stream. When the digital input is in use, a four-position slide switch allows you to set the Core 59's maximum output level to either 88, 98, 100 or 112 dB SPL, thereby allowing you to use your recording setup's full dynamic range at your preferred monitor volume level.

On the analogue input, a second four-position slide helps you maximise the bit depth of the Core 59's onboard DAC, in order to get the best signal-to-noise ratio by adjusting the input sensitivity to match the output of your console. If your setup has the usual professional standard maximum output level of +24dBu, that's the setting that you use; +18dBu if you're running at prosumer levels; +4 or 0 dBu if you're running audio equipment where these levels are more appropriate. Having set your input sensitivity, you can then adjust your preferred maximum working level as before.