The Core 59's DSP is based around an Analog Devices 64-bit chip that is capable of operating at sample rates up to 24bit/192kHz. In order to avoid sample–rate conversion within the Core 59, its DSP switches automatically to match the sample rate and bit depth of the incoming AES3 signal. For the analogue input, the Core 59 defaults to its maximum sampling rate of 24bit/192kHz unless an external word clock is connected.

Dynaudio justify the simplicity of the Core 59's DSP facilities by asserting that most professional users use system controllers or software programs to handle room correction, either of which makes monitor-based DSP correction irrelevant. Instead of offering overall EQ and delay adjustments, Dynaudio have concentrated the Core 59's DSP firepower on providing boundary-specific monitor position correction, together with a simple-to-use 'tilt' EQ that avoids the phase shifts created by conventional shelving equalisers, and a slide-switched high-pass filter at 80Hz to accommodate adding a subwoofer to a monitor setup.

The Sound Balance, or tilt filter, can be switched between Bright, Neutral and Dark. First developed by Quad in the 1970s for the company's Model 44 preamplifier, a tilt filter boosts the treble as the bass is cut (and vice versa) around a centre frequency. Quad marketed their 8-pole tilt filter as improving the subjective quality of music reproduction of overly bright or dark tracks by slightly increasing or decreasing the perceived warmth or brightness without adding any coloration. In the Core 59, the overall effect of the Sound Balance is similar to that of the Quad, although much more subtle at a fixed tilt of 1.5dB at 20Hz and 20kHz, rather than the Quad 44's variable tilt of 3dB at 50Hz and 20kHz. 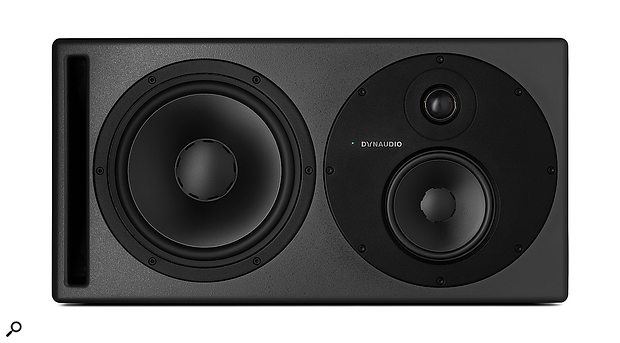 Where 'portrait' placement is desirable, the section containing the mid– and high–frequency drivers can be removed and rotated.

The two Position settings correct for boundary-related positioning issues. The first mode is called Anechoic (no correction) and is the one that you'd use if your monitor was in a large, well-controlled room or you were using third-party room correction software or hardware. Desk mode compensates for console reflections if you've mounted your Core 59s on a meterbridge, and Soffit is for when the Core 59 is soffit-mounted.

The Core 59 manual gives pretty detailed guidance as to their placement and the listening tests that should be carried out in order to correctly set the DSP, and the advice is well worth reading, including its detailed instructions on how to use string and measuring tape in the process.

For those of us who don't run room correction software or hardware, Dynaudio recommend using pink noise, a measurement microphone and a real–time analyser (RTA) to check the performance of the Core 59 within your room, and then to adjust the DSP settings for the flattest frequency response. The free Dynaudio Meter iOS app provides both pink noise and an RTA to assist you in creating a monitoring environment in which you can record and mix with confidence.

The Core 59's reproduction of the miniscule details inside reverb tails and compression artifacts is as impressive as the solidity of its bass at low volume levels.

Having run the Core 59s in for a couple of days with random selections from my CD shelves, I checked the setup with the Meter app and settled down to detailed auditioning at the 88dB volume setting, which approximates my normal nearfield working level. I found no need to make any adjustments to deal with room anomalies and therefore set the Sound Balance and Position switches to their neutral positions.

As I usually do, I began my assessment with Deadmau5's Grammy-winning EDM production 4x4=12, in order to gauge the Core 59's ability to reproduce extreme bass with power and precision without compromising the clarity and transient detail in both mid–range and treble frequencies. What impressed me here was not only the monitor's bass extension, but the control, definition and punch in the bass that was evident even at low monitoring levels. Being parcelled off in their own space, the mid–range and treble were, as I'd expected, unaffected by high-level bass excursions. In addition, the coherence of their integration with the bass driver was superb, resulting in a rock-solid soundstage that revealed nuances in the production that perhaps I'd overlooked before.

The 1969 original brass ensemble recordings of The Antiphonal Music Of Giovanni Gabrieli, and their 2015 remake, are two stunningly played and superbly recorded performances with a level of clarity, dynamics, density, harmonic complexity and transient detail across the audio frequency range that really exercises a monitor's ability to place instruments clearly and separately in a stereo soundfield. The Core 59 delivered one of the most convincing performances with this CD that I can recall. The 5–inch driver's wide bandwidth doubtless helps immensely in this regard, with the absence of any crossover-related anomalies in the critical areas of the mid–range, giving the reproduction of both instruments and voices a level of clarity and articulation that, in conjunction with the monitor's soft-dome tweeter and beautifully controlled bass driver, ruthlessly revealed detail whilst always remaining musical. The Core 59's new tweeter was yet another revelation. I've always been drawn to high-end soft-dome tweeters and the smooth detail of their performances that make them so easy to work on for long periods, but this Esotar Pro is something quite special: the sweet, articulate and highly detailed clarity that underpins its performance is, to coin a phrase, music to my ears.

Dynaudio's Core 59 is the latest entrant into a monitor universe in which CAD design, simulation software and rigorous testing, coupled with in-house manufacturing abilities, are delivering monitors with impeccable sonic performances at attractive prices.

I can't fault the control, detail and accuracy of the Core 59's performance across its 42Hz to 21kHz (±3dB) bandwidth, which creates a solidly centred soundstage with a real sense of width and depth within which voices, instruments and other sources are precisely delineated and located. The Core 59's reproduction of the miniscule details inside reverb tails and compression artifacts is as impressive as the solidity of its bass at low volume levels. In addition, given that it can produce 112dB SPL (at 1m) when pushed, the Core 59 could potentially have applications in theatre soundscaping and in high-end acoustic and classical sound reinforcement.

If you're thinking about purchasing new monitors, have the budget and possess a particular penchant for the sweet, smooth accuracy of soft-dome tweeters, then the Core 59 is an essential audition.

The closest direct competitor to the Core 59 has to be the similarly priced Focal Trio11 Be, a monitor that also features a rotatable mid–range/treble 'pod'. Other alternatives can be found in offerings from the usual suspects, including ADAM, Eve, Genelec, HEDD and Neumann.

An impressive mid-sized three-way active studio monitor that delivers an assured audio performance at an attractive price given the quality on offer.