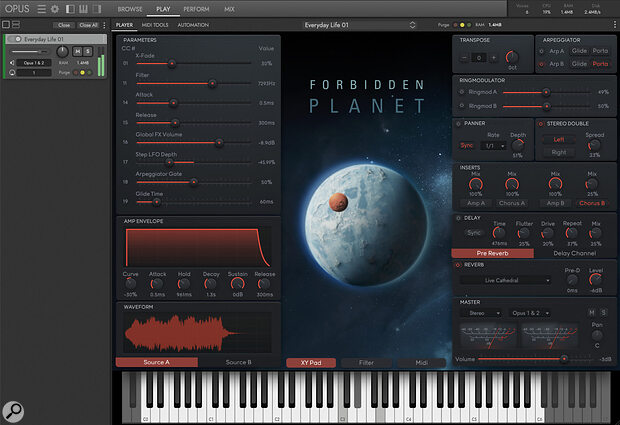 EastWest go off world with a whole planet of screen‑friendly synth sounds.

The use of synth‑based sounds has a long history in film and TV scores, but in the last few years it has seen a considerable resurgence on the back of films such as Bladerunner 2049 and the phenomenally popular Stranger Things. Of course, film/TV composers are not short of options when it comes to virtual recreations of the sort of classic synth sounds these scores feature but, if you’re looking for the ultimate, one‑stop sound solution designed specifically with this kind of musical application in mind, then EastWest’s new Forbidden Planet has got to be an intriguing proposition.

Forbidden Planet runs within EastWest’s Opus engine, and it’s describes as a “hybrid synth odyssey”. It’s certainly epic in size; there are over 800 preset instruments supplied, organised into seven categories and built from some 58GB of 24‑bit/44.1kHz samples. This huge sample base is derived from a collection of deeply sampled analogue synths (both vintage and modern) plus various rock, orchestral, world, vocal and sound effect elements. Two of these underlying sound sources (labelled A and B) are layered in a preset, so things can get ‘hybrid’ in the sense that you can combine a conventional acoustic source with a synth‑based one.

The engine itself can certainly be described as hybrid. In Forbidden Planet, the sample‑based sound sources take on the role of oscillators found in a conventional synth engine, before being processed through the additional synth engine stages including amplitude envelopes, filtering, ring modulation, a selection of effects, arpeggiation and parameter modulation options. It’s a concept that has been applied before (for example, IK Multimedia’s Syntronik, reviewed in SOS January 2018) and, potentially, can deliver some authentic analogue synth tones in a convenient and flexible virtual instrument format.

Rather wonderfully, the Opus front‑end allows you to download presets on demand if you don’t fancy doing the full 58GB download all in one go (although the EastWest Installation Center software does manage this process very well). As a one‑off purchase, Forbidden Planet is very much in the working professional price bracket. However, for those comfortable with subscription‑based access to their sounds, Composer Cloud+ offers a mind‑boggling amount of content at a modest monthly cost, and Forbidden Planet just adds further value to that deal.

The bottom line is that Forbidden Planet is stacked to the brim with truly fabulous sounds that are full of analogue synth character.

Of course, all of the standard features of the Opus multitimbral player form part of Forbidden Planet’s operation. So, for example, preset instruments can be browsed, auditioned and loaded via the Opus Browse window, while the Perform and Mix windows give you access to options for configuring the key range and the mixing/effects options respectively of each loaded instrument.

The bulk of the options specific to Forbidden Planet are found in the Play window, and these are spread across three sub‑windows: Player, MIDI Tools and Automation. The first of these is home to the bulk of instrument‑specific controls. Top‑left in the Parameter panel, you get slider controls for key sound‑shaping parameters such as the crossfade (X‑Fade) between the two sound source layers, the filter cutoff, and the global attack/release values. Beneath this, you get a global Amp Envelope panel with more detailed options for shaping the amplitude envelope. On the right side are a series of smaller panels for quick access to functions such as the Arpeggiators (there are separate arp options for each source layer), Ring Modulators, Panner, Stereo Doubling, insert effects, Delay and Reverb, as well as the master output level/metering.

The central panel provides three tabs: XY Pad, Filter and MIDI. The XY Pad provides graphical control replicating a combination of the X‑Fade and Filter controls. These respond to CC1 (mod wheel) and CC11 (expression) respectively, so are easy to both automate, or adjust in real time using a suitable MIDI hardware controller. The presets are purposely designed to make these real‑time controls a powerful way to bring movement and timbral change to the sounds. 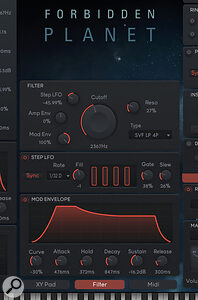 The Filter section sounds great and is easy to use.The Filter tab provides access to the full set of filter controls, with multiple filter styles available and step‑LFO, mod envelope and amp envelope filter modulation all supported. It’s easy to use but also sounds great when applied to the analogue synth‑based source materials. Finally, the MIDI tab provides the detailed control set for the two arpeggiators, with step‑based control over note velocity, filter cutoff or pan. It’s a breeze to create your Stranger Things‑style note arpeggios. You can configure independent tempo‑sync values for each arpeggiator but, if I was to have a wish‑list item, it would be the ability to adjust the step number; it’s fixed at 16 steps.

In terms of the engine, the only other thing to note is that you can’t browse the individual sound layer sources yourself to mix and match your own choices for Layer A and B. However, Opus’ Perform window provides a comprehensive system of blending multiple presets into a more deeply layered instrument, so you can create your own sound combinations, albeit at the preset level. That said, Forbidden Planet’s ability to morph its sounds into something totally new is impressive, while still managing to be unintimidating in use; it’s an attractive combination.

Forbidden Planet’s presets are organised into seven suitably self‑explanatory main categories: Arpeggiator, Bass, Drones, Effects, Leads, Pads and Poly Synth. Even with the additional Quickstart suggestions to get you started, you will be a long time auditioning what Forbidden Planet has to offer. In part, that’s because there are 800+ presets to work your way through. However, it will also be because so many of the sounds themselves are undeniably impressive; once you get the XY Pad moving, it’s difficult to stop playing. 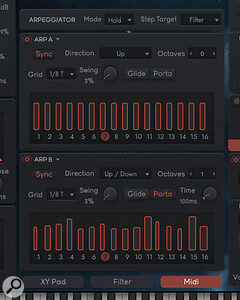 Stranger Things‑style synth arps anyone?Among the many highlights, for me at least, the Arpeggiator category was a stand‑out. In many of the presets — for example, Bastion or Blue Pill — you get contrasting sounds and arpeggiation settings within the two layers so, as you adjust the X‑Fade control, you can morph between two very different sonic characters. Add in some filter cutoff adjustment and, even within a single preset, you have a massive amount of tonal variation on offer. Other presets (Everyday Life 01, for example) combine a pad sound in one layer with an arpeggiated sound in the other and, in this case, the X‑Fade control lets you seamlessly blend in the arp to some sustained chords; this is very Stranger Things. The other categories include some truly epic basses (Godzilla; full of analogue goodness), suitably ominous drones (such as some of the Deep Noise Drone presets), a whole range of different pad styles (including some fabulous analogue string pads such as Scientific Symphony) and some very characterful leads (such as the spooky Retro Piano presets, which might also do good service in a lo‑fi hip‑hop track). The Poly Synth presets are... well, suitably polysynth‑like, which is to say full‑fat and analogue sounding. Finally, the Effects category provides an eclectic set of the weird and wonderful but includes some sounds that capture a ’50s sci‑fi B‑movie vibe (Epic Doom FX, for example).

In use, Forbidden Planet is an absolute pleasure. Opus can get pretty deep, but the key controls for each Opus library are generally very accessible and that’s certainly true here. However, the bottom line is that Forbidden Planet is stacked to the brim with truly fabulous sounds that are full of analogue synth character. Yes, there are plenty of other excellent analogue synth emulations available (and many have been reviewed in SOS) but, for film and TV composers especially, Forbidden Planet’s sound palette would fit right in amongst the cues for a Stranger Things‑style score or any top‑end sci‑fi movie needing that classic analogue synth sound. Sonically, this is epic.

East West do offer a 30‑day free trial of the Composer Cloud subscription service so you can, of course, try it for yourself. Just be careful though; Forbidden Planet is both very desirable and highly addictive. Highly recommended.