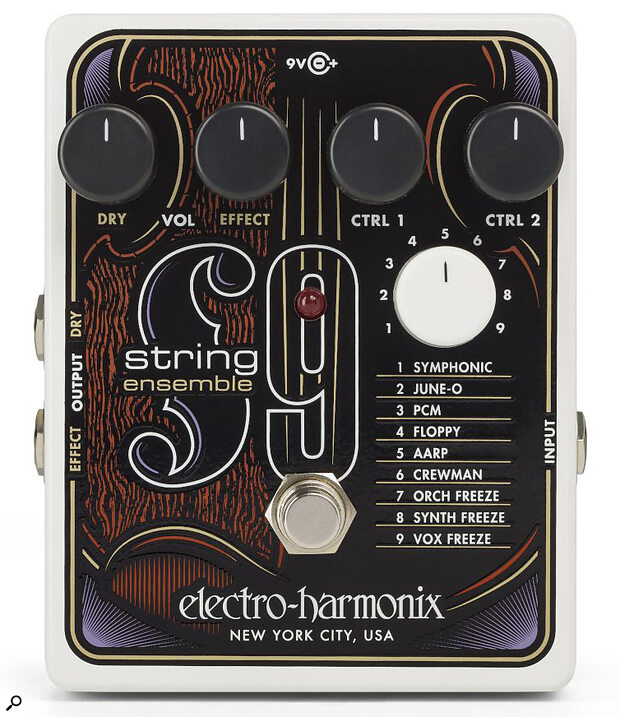 The S9 turns your guitar into a full‑blown string section.

EHX’s 9‑series pedals coax various other instruments’ sounds from a regular electric guitar signal, and the latest addition to the range is the S9 String Ensemble. But as well as following the now established formula of processing polyphonic signals (ie. chords) to substitute the guitar sound (with string and string machine sounds in this case), the EHX engineers have embedded some patch‑specific effects plus their Freeze algorithm. For four of the presets, Freeze adds a release time to allow the synth sound to fade out smoothly after the input note has ended. On the last three presets, however, there’s a choice of Manual or Auto Freeze. In Auto mode, whatever you play last, whether it be a single note or a chord, is sustained indefinitely or until another note or chord is played. In Manual mode, selected by turning the Ctrl 2 knob clockwise past is midway position, the pedal freezes whatever note or chord you play first, so that you can play over it using your normal guitar sound. Hitting the Bypass switch ends the sustained sound.

The physical format of the pedal, which comes with a suitable PSU, is the same as for previous models, with separate Effect and Dry outputs and the option to use just the effect output jack to provide a mix of the guitar and the synth string sound. There are separate Effect and Dry level controls and two control knobs that perform different jobs for the different presets, which are selected using a nine‑way rotary switch. For example, on the first patch, which emulates a full symphonic string sound, Ctrl 1 adjusts the tone while Ctrl 2 sets the release time. For this patch, the lower strings of the guitar introduce a sub octave into the sound. The second preset, June‑O, creates a synth‑style string sound and this time the two knobs control tone and allow you to select from five octave up/down doubles. Preset three, PCM, has control over tone and vibrato depth while preset four, Floppy (Mellotron‑flavoured strings), again offers control over tone and release time. No guessing what number five, AARP stands for, and here you can adjust a phaser speed as well as release time. At number six we have Crewman, a thinly disguised Crumar vintage string machine sound, with controls for filter sweep and release.

The final three presets utilise the aforementioned Freeze functions. Orch Freeze and Synth Freeze use Ctrl 1 as a tone control. Lastly we have Vox Freeze, which is a pseudo voice‑like sound, where Ctrl 1 sets the phaser modulation speed. All three presets use the Ctrl 2 knob as a simple switch between the Auto and Manual freeze modes. The Freeze effect itself sounds a bit like an infinite reverb to my ears and is quite effective if you need a background wash to play over.

In Auto mode, whatever you play last, whether it be a single note or a chord, is sustained indefinitely or until another note or chord is played.

While mixing the string and guitar sounds can be a useful way of adding a pad‑like sound behind the guitar, the string sound is cleaner and more convincing when fed through a separate full‑range amplifier — or you could route it via a volume pedal to the PA, which is what I tend to do with my B9 pedal. Heard dry and in isolation, the string sounds aren’t always quite as smooth‑sounding as you’d get from a keyboard, but heard in context your audience will never know the difference. You can also add interest and movement to the simulated string sounds by adding a modulated delay. Note that the S9 should be placed before other pedals in the signal chain, other than perhaps a compressor — it won’t work as well if fed with distorted, modulated or delayed sounds.

Overall the S9 is a very welcome addition to the range, as string‑like sounds are very versatile and fit into many musical genres. The addition of the pitch and modulation effects used to modify some of the sounds, plus the Freeze function, really make the S9 something special. However I’m still waiting for them to come up with a pedal that lets you load your favourite patches from the rest of the 9‑series range.

A welcome addition to EHX’s 9‑series pedal range, the S9 coaxes a range of usable string‑like sounds from a regular guitar signal.