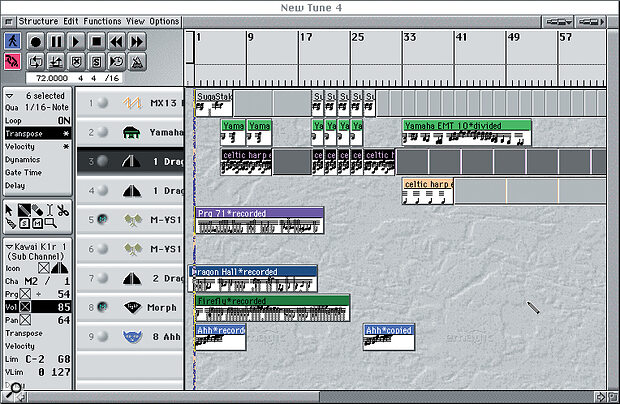 The latest version of this popular audio sequencer sees Emagic's answer to competitor Steinberg's VST built‑in effects. But there's rather more to this significant upgrade than that, as Paul White reports.

Steinberg certainly forced a change of pace in software development when they came up with the Virtual Studio Technology concept for their Cubase VST MIDI + Audio sequencer (reviewed SOS July 1996 and November 1997), and since then it's been a foregone conclusion that other MIDI + Audio sequencer designers would follow suit. There was much speculation as to what Emagic's response would be, but now the long‑awaited Logic Audio 3.0 has arrived, and it's got more new features than Michael Jackson at a plastic surgery sales convention. Inevitably there are real‑time native signal‑processing effects, all with parameter automation, but in addition the old system of having to buy optional software extensions to allow third‑party hardware to be supported or used in conjunction with native audio has been abolished (with the exception of the TDM Extension, which is still required to run Digidesign TDM Pro Tools hardware with TDM plug‑ins). For example, Mac users can now use the computer's own hardware to record audio and create real‑time effects, while at the same time addressing Digidesign hardware for additional tracks, all from the basic v3.0 software. Furthermore, the real‑time 'host computer‑generated' effects can be used in conjunction with the Mac's own AV inputs and outputs, Emagic's own Audiowerk8 card or Korg's 1212 I/O card, and PC users have the same choices, providing they have a suitable soundcard. Version 3.0 also supports dual Audiowerk8 cards for true 16‑out operation and an earlier 'monitor during record' bug has been fixed so that Audiowerk8 owners can hear existing tracks as they overdub.

Any system that uses the computer's own processor to generate effects needs to be pretty powerful if it isn't going to bottle out as soon as you add one or two basic effects, so before you start having unreasonable expectations you should take a look at the 'Realistic System Requirements' box, for an idea of the kind of setup you'll need. 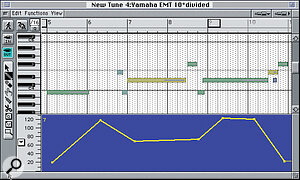 The Hyperdraw feature, now accessible from the Matrix editor.

To properly cover the basics of Logic Audio plus all the new v3.0 features would take up about half this magazine, so I'm going to assume that you already have some idea of what Logic Audio is about, and concentrate instead on the enhancements to both the MIDI and audio sides of the program (see our earlier Logic Audio reviews in SOS February 1996 and November 1996).

The first thing you notice when booting up is a new look to the main Arrange page, with coloured instrument icons in the track list. There's the option to have drop shadows behind the instrument icons or not (I prefer not — they just make the icons look out of focus), and anything with a very light colour shows as a grey icon with a coloured shadow. There are also proper track‑mute buttons, plus record‑ready buttons for the audio tracks, something I've been pleading for for a long time. Thanks guys!

Once you get into the Environment page where the Audio Objects (virtual mixer inputs, groups and outputs) reside, you'll also notice that these have a smart new 3D look, which is a huge improvement over the rather simplistic line art used in previous versions. Before going any further though, a warning. My review version of Logic Audio 3.0 was actually version 3.06, but after the first batch, this was upgraded to 3.08. Should you have bought one of the early copies and need an update, these are available either from Emagic's web site or from the UK distributor, Sound Technology. I ran the updater before continuing with the review.

There's a new and very useful Arrange page function called Skip Cycle, which can be used to mark a section of the song to be skipped during playback. Using this you can skip a verse or middle eight to see how it will sound without messing with your arrangement. This is done by dragging the cursor from right to left in the 'ruler' section at the top of the window, whereupon a black line marks the section to be skipped. To set up a loop marker, you now have to move the cursor from left to right, which fills in the selected area with the familiar black block. In the previous version, dragging in either direction would simply have set up a loop.

Hyperdraw is that helpful feature that lets you draw a graphic envelope to automate virtually any MIDI‑controllable parameter, such as volume or pan position. The envelope comprises a series of straight lines linked by points, and new points can be added by clicking on the line at the desired point. In previous versions you couldn't impose a Hyperdraw envelope directly on an audio sequence, but now it works exactly the same as for the MIDI tracks, creating a far better sense of continuity between audio and MIDI data handling. What's more, you can now access Hyperdraw in the Matrix (piano roll editor), and score windows. A further practical touch is that you can now delete a complete Hyperdraw envelope by holding down Alt Shift and double‑clicking in the Hyperdraw region.

Version 3.0 isn't a free upgrade, but is a 'must have' for any existing Logic users.

Most of the other enhancements are simply operational niceties, such as the ability to select several different regions in different tracks, then move them all to a...