Fishman's acclaimed process for improving the sound of acoustic guitar pickups is now available in pedal format - and with 24-bit converters and 32-bit internal processing, this is a distinctly superior-sounding Aura. 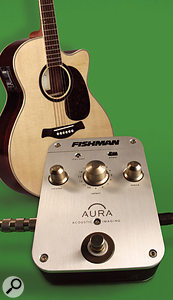 Fishman's first 'Aura' processor— their Acoustic Imaging Blender, launched in 2004 — was hailed as a groundbreaking product capable of making an acoustic guitar pickup sound just like a microphone signal. Acoustic guitars are complex sound generators, with multiple sources — the strings, the different parts of the body, the neck — all 'speaking' at different times. A microphone placed at any sensible distance from the instrument is able to integrate all these disparate sources into the sound that we are familiar with, whereas a pickup mounted under the bridge saddle, whatever its quality, is only ever going to give a greatly simplified version of the output. It was precisely this problem that Fishman's Aura process was developed to tackle, and it did so using a sophisticated digital EQ and phase adjustment process to compensate for the pickup's over-fast response and lack of resonance and complexity.

The Aura Acoustic Imaging Blender worked remarkably well in the right hands, but was perhaps seen as a little over-complicated by the less adventurous in the acoustic guitar community, with the absence of battery power also being cited as a drawback. The latest incarnation of the technology — a range of Aura Imaging Pedals — tackles both issues head-on, using a conventional, battery-powered pedal format with just three controls. What's lost in flexibility, however, is more than made up for in sonic quality, for this Aura has 24-bit digital conversion that allows it to outshine its predecessor in both noise and headroom.

So, out go the two onboard EQs for both dry and 'Imaged' signal, the on-board compression, the tuner, the XLR DI output and footswitchable presets of the original Aura; in their place are an output Volume control, a Blend control and a 16-way rotary program Select switch. OK, there's a recessed gain trim on the side too, but that's a set-and-forget, rather than a real control. Battery life is stated as a decent 27 hours, using a single PP3 9V in a tools-free housing under the pedal — at least, it is tools-free until you try to get one out again. The flip-up cover prevents you from getting a finger in the business end and the recess for the cover clip isn't quite big enough to get a finger in. It strikes me that either the terminals or the cover hinge should have been mounted the other way round.

The Aura pedals have a phase switch, allowing you to invert the polarity of the output, which can help reduce feedback, but you can no longer match the polarity of the Image with the dry signal path, as you could on the original Blender version. I am sure this design decision was taken with the knowledge that the vast majority of pickups have the correct polarity, but if you happen to have one that is the other way round, then you'll either have to find a way to flip it or use a different one.

There's a range of six different Aura Imaging Pedals, and each one is dedicated to a specific guitar type: Concert, Orchestra, Dreadnought, Jumbo, 12-string and Nylon, with the 16-way selector providing variations only within that type. For most effective operation, the original Aura required that you select a preset that was derived from the same pickup type and, as near as possible, the exact guitar you were using. The further away from this ideal you got, the less favourable the result. The same principle applies here, but now you have to choose the most appropriate model of pedal to buy, having first established that it does actually have a variation that works well for your instrument.

Very little documentation is provided — there's a user guide available on the Fishman web site (www.fishman.com) and some basic instructions on the underside of the pedals — so there is no way of finding what works other than simply listening. In some ways this is a good thing, as on the original Aura blender I was sometimes torn between what my ears were telling me and what the manual was telling me ought to be the best Image. Here, there's no such conflict; simply 16 apparently random variations on each guitar body-type.

At low blend settings, of the kind you might use for live performance (say, under 40 percent), the differences between presets are actually quite subtle, and in the end I settled on a more radical method of matching guitars to variations: if you set the Blend to maximum, listening to just the Imaged signal, all the variations that are definitely not right for your guitar stand out a mile as sounding particularly coloured or 'phasey'. The one or two (it is rarely more than that, in my experience) that are right, will still manage to sound fairly plausible at 100 percent, and it is those ones that will give by far the best performance when restored to an optimal 40 to 50 percent blend.

With the boxes matched to appropriate guitars I was always able to find a couple of presets that worked well, whereas when I deliberately mismatched guitar and Aura pedal I could find no sounds that worked really well, so choosing the right pedal is clearly critical. This is relatively bad news for anyone who uses two or more guitars of significantly different sizes, as you'll want a pedal for each. The only exception I found was that it is possible to improve the tone of a nylon-string guitar using one or two of the other pedals — probably because raw amplified nylon-string generally sounds so awful — but it offers nothing like the same degree of improvement as the dedicated nylon pedal. 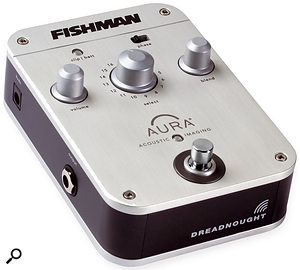 It's worth taking the time to find the right model for your guitar, as it will make a big difference to the results you achieve. The Dreadnought (pictured) is intended for use with deep-bodied guitars. As you can see, there's very little, other than the model name at the front, to distinguish between the pedals visually.

Each of the Acoustic Imaging Pedals is intended for a specific guitar body style:

How The Aura Process Works

The Aura process was created by Fishman technicians analysing the frequency spectrum and phase response of an acoustic guitar picked up by a high-quality microphone, and then comparing that spectrum to an analysis of the same guitar picked up via an under-saddle pickup. From those two pieces of data it was possible to derive the necessary frequency/phase adjustment to turn the pickup sound into the microphone sound using real-time digital processing. In the actual product, the input signal from the under-saddle pickup is digitised, with the output from the 24-bit A-D converter feeding the Aura processing stage and also being split off to a delay processor, to keep the dry signal time-aligned with the processor output. Without this additional step, blending the dry and Imaged signals would result in odd-sounding phase anomalies and a loss of volume at certain mix settings. The total delay through the system is only about three milliseconds, and is not perceptible to the player in any way.

Some people tend to mistakenly assume that their guitar sound is being replaced with digital samples by the Aura process. It is not — the process is more akin to a high-resolution EQ, using around two thousand bands of processing instead of the usual three or four, so even at 100 percent 'wet' blend settings, the output is always still a modified version of the input signal.

Fishman's Aura process was conceived primarily to combat the transient-heavy, sometimes harsh, one-dimensional sound that we all associate with piezo under-saddle pickups used in a live performance situation. It achieves this very well when properly adjusted, adding more body and a much sweeter top end, but can it also stand up to the closer scrutiny of recording? 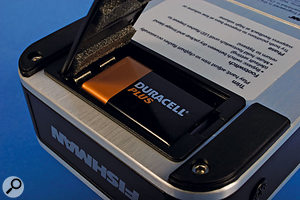 Changing the battery can be a bit fiddly, as there's little space to get your fingers in. Fortunately, you shouldn't have to do this too often, as Fishman say you can get 27 hours from a PP3 battery.Perhaps surprisingly, Fishman make a point of stating that these pedals are optimised for live performance rather than recording, but they are nevertheless capable of generating extremely good results. A high-quality microphone optimally positioned in a nice acoustic space will always sound better, but I'd much rather record with the Aura signal than use any mic in a poor-sounding room, a raw undersaddle signal, or even a cheaper mic in a nice room.

Once the gain trim on the side has been optimised for the instrument and the best Image selected there is really nothing to adjust other than the blend setting. There's, effectively, no discernible noise added by the Aura itself, even at high gain, so low-level sources are not a problem, provided their self-noise is not high. Testing with a selection of 9V DC external power supplies produced no problems, even with the more dubious ones that some of my other pedals are a bit unhappy with.

Blend settings in the region of 40 to 50 percent always seemed optimum, to my ears, but that may vary with different pickup types. I found the best results were produced using Fishman Matrix Natural series pickups — not a surprise —but I was able to verify that other pickup types still benefited from the process, including AER AK15 Plus (with no mic signal), LR Baggs iMix (with no iBeam bridgeplate signal) and some magnetics, including a Fishman Rare Earth and a Sunrise.

Recording pickup signals via an Aura allows you to use EQ to fine-tune the sound for artistic considerations, rather than having to perform major corrective surgery. It also allows you to use compression to bring out detail, rather as you might with a miked acoustic, as opposed to trying to tame spiky transients and achieve a more natural decay. The addition of a subtle, predominantly early-reflections reverb is all that is needed to complete a highly convincing illusion of a miked-up guitar in a real space.

I'd never recommend that you buy one of these pedals for recording instead of a microphone, but if there are times when you can't record with a mic, or if you just fancy being able to overdub without headphones sometimes, an Aura pedal will certainly get the job done. The original Aura Acoustic Imaging Blender remains available alongside the Aura Imaging Pedals, at least for now, but it doesn't really make a lot of sense for the 'flagship' product to have a significantly poorer-quality signal path and converters. Surely there's another Aura in the pipeline, with the sonic integrity of the pedals and the facilities of the blender? Now there's a product I want already. In the meantime, these will do nicely.

The Fishman Acoustic Imaging Blender (£399) allows a lot more control than the pedals, but the 16-bit converter is a limitation in critical applications. D-Tar's Mama Bear (£289 from Aria UK) is a slightly quirky implementation of the same principle, but capable of fine results when used at low blend settings, and a source selector switch allows it to match a wider range of pickups. The Boss AD8 (£234) is a less ambitious application of similar technology, but is still capable of making a worthwhile improvement to any under-saddle pickup.

An excellent step forward for the Aura-based product range. They might be simpler than the Aura Blender, but the improved sonic integrity of the Aura Imaging Pedals makes them far more usable in critical listening situations.

An excellent step forward for the Aura-based product range. They might be simpler than the Aura Blender, but the improved sonic integrity of the Aura Imaging Pedals makes them far more usable in critical listening situations.