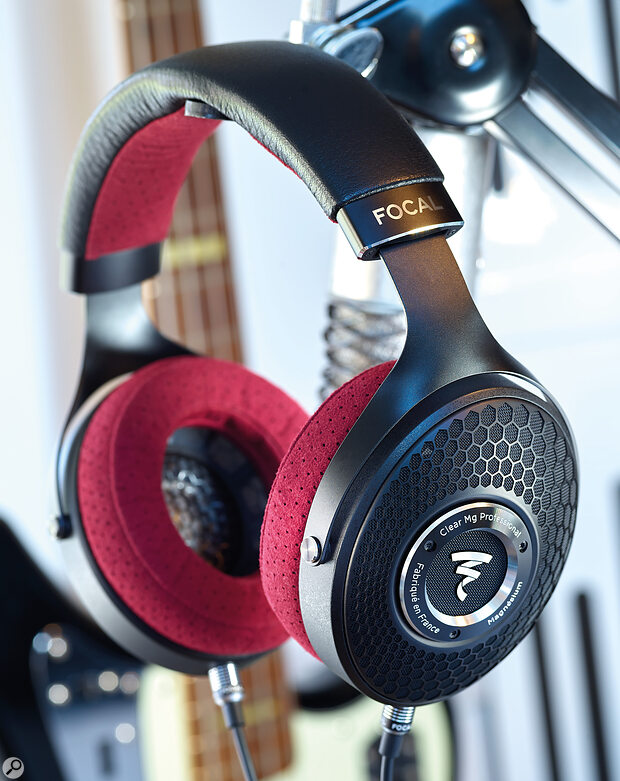 It’s only three years since I reviewed Focal’s Clear Professional headphones. You’d expect any pair of phones with a four‑figure price tag to sound pretty stellar, and I was duly impressed. Nevertheless, Focal’s team weren’t content to rest on their laurels, and the Clear Professionals have been superseded by the new MG model, which introduces several design improvements.

One of these is immediately apparent: the closely textured grille on the outer side of the original earcups has given way to an attractive ‘honeycomb’ design formed of graduated hexagons. This makes the area to the rear of the drivers even more open, reducing internal reflections that can colour the sound.

In other respects, the MGs are outwardly very similar to their forebears, with the same smart red‑and‑black colour scheme, the same comfortable fit, soft cushions, detachable Y‑shaped cable, and the same needless difficulty in identifying the left and right earcups. Once again, they’re supplied with a smart and reasonably robust semi‑rigid case. Internally, however, there’s a newly designed driver with a pure magnesium dome, which gives the MGs their capital letters. This, along with various other design improvements, is said to offer “even more precise high‑frequency reproduction”, and “the same listening sensation you’d get with the best monitors”.

The MGs’ specifications are mostly identical to those of the earlier model. With a nominal impedance of 55Ω and a sensitivity of 104dBSL for a 1mW input at 1kHz, they are easy to drive from any headphone amplifier.

They have an impressively rich low end for a moving‑coil design...

It’s been three years since I heard the original Clear Professionals, so I’m reluctant to offer a definite opinion as to how the new model compares sonically. However, I did have access to the Audeze LCD‑MX4 and the HEDD Audio HEDDphones, two other excellent pairs of open‑back headphones in the same price bracket. Whereas the Clear MG Professionals are an orthodox moving‑coil design, both of these use ‘alternative’ driver technologies: planar magnetic and Air Motion Transformer respectively.

The interesting point here is that when I tested the Clear Professionals, their sound character struck me as being quite different from that of the Audeze phones. That wasn’t the case this time around, or at least, not to the same extent. The MGs come surprisingly close to matching the dynamic impact and thump that are the hallmarks of the Audezes. They also have an impressively rich low end for a moving‑coil design, though I felt that there was an emphasis around the 100Hz mark that wouldn’t be there in a truly neutral monitoring system.

As you’d expect, the MGs have a more obviously extended treble than the Audeze phones, but this is not exaggerated at all, and they aren’t sibilant or ‘scooped’ in the way that many moving‑coil models are. In fact, the HEDDphones came across as slightly brighter, and perhaps a little cleaner in the upper mid‑range.

To abuse a sporting cliché, though, at the end of the day, music was the winner. All three of these models are superb, and picking one over another is like choosing caviar over truffles. Subjective preferences are important in monitoring, and no‑one should spend £1000+ on a pair of headphones without auditioning three or four alternatives. But if you are in this position, the MGs very much deserve a place in your shortlist. Even if a different model is currently leading the race to be your personal mixing headphones, hearing the Clear MG Professionals might well change your mind.

Focal continue to push the envelope of moving‑coil headphone design, and the new Clear MG Professionals impress with their dynamic response and low‑frequency extension.