Wouldn't it be great if somebody invented a guitar bridge that would enable your guitar to stay perfectly in tune, even if the strings bind in the nut or stretch slightly during performance? Impossible, you say? Not at all — it just requires some very clever mechanics.

To maintain a constant pitch, a guitar string needs to be under a constant tension. This could be achieved under laboratory conditions, using pulleys and weights, but the Perfect Tune Bridge (which costs $374) uses a system of springs and levers to do the same thing in a more practical way. It is inevitably a bit more bulky (especially in height) than conventional bridges, but — providing palm damping isn't one of your key playing techniques — it is actually very comfortable to play. As you might imagine, any system of levers and springs can only provide constant tension over a limited physical range and you may need different springs fitted to the bridge for string gauges other than the usual 9s and 10s used by most electric players (the manufacturers say the system should be able to handle 11s).

The bridge fits in place of a conventional Tune-o-matic bridge and tailpiece (other bridge types may be in the pipeline), and it locates over one of the two bridge posts, with all the tension taken by the tailpiece studs. The height is adjusted using the bridge-post nut, onto which the bridge is located. If you can't get the action low enough this way, you could replace the bridge-post circular nut with washers to achieve the correct height. The fairly conventional intonation screws protrude from the back of the bridge, and once the intonation is adjusted a single screw at the side of the bridge locks everything in place.

There are further tuning screws on top of the bridge, but setting these up requires understanding of how the bridge works. Essentially, each string saddle is part of a rocking mechanism that applies the constant tension via the spring system. This lever rocks between two end-stops, and providing the setup has it floating somewhere between the end-stops the constant-tension mechanism works. When first tuning the guitar, you have to balance the guitar-tuner tension and the bridge tuning-screw tension, so that when the instrument is in pitch the lever floats around midway between the two points.

It's important to appreciate that you fit your new strings (stretching them, as usual, by pulling), and use the guitar's tuners to tension each string. Don't listen to the pitch at this point, because your guitar's tuners serve only to get the bridge mechanism into the right range. Instead, watch the bridge until you see the saddle rocker assembly lift from the end stop. Then you adjust the tuner until the gap is a few millimetres (about the thickness of a British 2p coin), then use the tuner on top of the saddle to bring the string to the correct pitch, turning it clockwise to sharpen the note. If the gap opens or closes by much, adjust the guitar tuner to get that 2p-sized gap back again. Job done!

The system actually works astonishingly well (as tests with a Peterson strobe tuner confirmed), although there's a potential drawback: if you set up the bridge as described, any attempt to bend strings or apply vibrato will be counteracted, which feels very odd! But you can get around this to a large extent by setting the saddle lever much closer to the front stop: this way, you only have to bend the string a very small amount to exceed the range of the mechanism and stop it from cancelling out your vibrato. 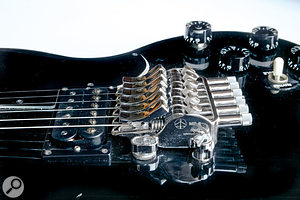 My method for achieving this is to try to tune each string sharper using the guitar's own tuners. The pitch will remain constant until the bridge saddle hits the front stop, at which point the string will start to go sharp. Back off the tuner until the string just returns to the correct pitch and you'll be able to bend notes more or less normally, although some very subtle vibrato may still get lost or diluted. Such a setup will still compensate for strings going flat. Of course, temperature changes at gigs can make instruments go sharp, so you could run out of compensation range if you set up for optimum string-bending. If this happens during performance, you just need to slacken off the offending guitar tuner slightly to bring the mechanism back in range.

Because of the risk of interfering with more subtle vibrato, some blues players may be reluctant to fit a Perfect Tune bridge, but it is great for rhythm players or jazz players who don't bend notes much, especially those who have a tendency to fret too hard, resulting in some notes being pulled sharp. The same technology should work very well on bass guitars, and I gather this is something that hasn't escaped the manufacturer's attention!

The sound changes slightly (almost as though you have a Fender sprung-type tremolo hanging off the end of the system) and the strings feel a bit 'springy', again not unlike those on a tremolo instrument, but the system really works and holds the tuning rock-solid. As a bonus, you can push down on the individual bridge saddle levers with your fingers to get a pitch-shift of up to one whole tone on the B-string and close to that on the others, so with a bit of practice you can create some nifty pedal-steel or B-Bender effects.

Despite some 'inelegancies' in this first model, the Perfect Tune bridge is one of the most ingenious pieces of guitar design I've seen in many years, and it could well be the most significant mechanical development since locking vibratos and tuners. There may be some slight mechanical rattles, but these tend not to come over on the amplified sound. And although the mechanism is a little bulky — which inhibits palm-damping techniques — I can see no reason why a future design couldn't place more of the mechanics on the underside of the bridge, where it could be accommodated by a recess in the guitar body (after all, you need to machine out wood to fit a Floyd Rose bridge).

I'm seriously impressed that anybody thought to build this bridge and even more impressed at how well the principle translates into practice. If you suffer from tuning problems on an instrument with a Tune-o-matic style of bridge, the Perfect Tune bridge will amaze you. Paul White

Sitting in place of a conventional Tune-o-matic bridge, this is a truly ingenious and unique mechanism for keeping your guitar in tune.

Peterson's StroboStomp is based on the same strobe technology used in their pioneering high-end tuners, which used to be seen on every major band tour. The early models were bulky and incredibly expensive, and included some mechanical components, but the pedal-format StroboStomp 2 uses more up-to-date digital technology, teamed with an LCD 'Virtual Strobe' display, all packaged in a tough but light aluminium shell.

For those unfamiliar with the strobe system, instead of having a pitch meter that tells you whether you are sharp or flat, a strobe displays a pattern of moving bars that drift upwards when the note is sharp and downward when the note is flat. The closest chromatic note name is also displayed. The aim is to get the display stationary, the benefit to the user being that the accuracy of tuning achieved by this method is to within one tenth of a cent (one thousand of a semitone), which Peterson claim is around 30 times better than most conventional tuners. 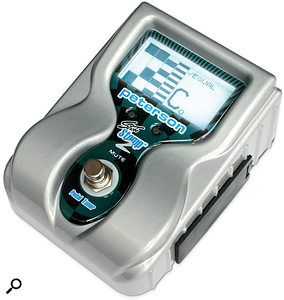 The StroboStomp 2 offers longer battery life than the original StroboStomp pedal, and it includes a menu of 'sweetened' tunings for electric and acoustic guitar, bass, Dobro, pedal-steel guitar, DADGAD, 12-string and electric violin. Essentially, these are small deviations from the equal temperament scale that can make the instrument sound more 'correct' (many players make these adjustments by ear after tuning to an electronic tuner). Options include a setting for those using a Buzz Feiten compensated nut, and you can store four custom sweeteners.

As well as being a very accurate tuner, the StroboStomp 2 also doubles as a DI box, with a balanced Neutrik XLR output in addition to the usual instrument jack. A chunky footswitch activates the tuner and also mutes the guitar, but even that has user options, as DIP switches inside the 9V battery compartment allow you to select from three modes: the first mode lights up the tuner only when selected via the pedal and offers a true hard-wired bypass when the tuner is off; the second leaves the tuner and active DI output on at all times — which obviously uses more power but may be a good option if you're powering from an external adaptor; and option three is designated DI/Power Save, which is the same as option two, except that the tuner is only on when you hit the pedal, rather than all the time. The StroboStomp 2 comes set up in the last way, but it only takes a moment to change it (which I did, as I like the idea of a hard bypass). The switch itself is a chunky stomp type and a blue legend lights up to let you know when the guitar signal is muted. There are also two small buttons: one to cycle around a parameters menu and another to make selections. As well as the sweetening options and the reference pitch, there's also the option of drop-tuning in semitone steps, going as far as four semitones flat or seven semitones sharp, for checking those capo tunings or Jimi Hendrix/SRV E-flat tunings.

I used the StroboStomp 2 to set up the intonation on a guitar I'd just reassembled, and I can confirm that it is ruthlessly accurate. The strobe offers the steadiest display if you pick fairly gently using the fleshy part of your finger rather than a plectrum, but it doesn't take much getting used to. There are four rows of strobe bars: three move in response to a regular guitar, whereas all four move when you're tuning a bass, due to the extra octave below. I tried the normal equal temperament tuning and the sweetened guitar tuning options but actually preferred the equal temperament sound, probably because that's what I'm used to. The sweetening options are quite subtle, as you'd expect, but they do change the character of chords enough that you notice.

At £133, the StroboStomp 2 costs rather more than your usual guitar-case tuner, but it offers rather more too. It is ideal for use in guitar workshops and in recording studios, where the best possible accuracy is essential. Of course, no matter how carefully you tune a guitar it is always going to change as you play (especially if you bend strings or use a tremolo), and the tuning stability of your instrument probably means a conventional tuner will be easily good enough for live performance. But when it comes to checking tuning in the studio or setting up a guitar's intonation, nothing else that I've tried comes close to being as accurate as the StroboStomp 2. Paul White

The StroboStomp 2 offers greatly improved accuracy and provides far more facilities than any other tuner I've used. It also doubles as a DI box, which could be useful for acoustic players who need to feed both an on-stage combo and PA system.