If you've found PA systems fiddly and time-consuming to set up, perhaps the HK Soundcaddy One is right for you.

The Soundcaddy One is a 600W full-range system based on the same line-array technology used in the versatile HK Elements system (reviewed in SOS August 2011). It takes ease of use one step further than Elements, by allowing the slim line-array speakers to be stowed in the top of the sub for transport.

Its name comes from its golf-caddy styling, built using a 19mm birch plywood cabinet with integrated handles and wheels. It also comes equipped with edge guards and a cover to protect the unit in transit. When packed for transport, the Soundcaddy One measures 1020 x 270 x 340mm and weighs in at 29kg.

Pressing the top edge of the line-array speaker column releases a catch, allowing the line array to rise by way of a hydraulic system, to a height where it just clears the cabinet. This lets you reach the twist lock beneath it and set the integrated speaker pole as required, up to a maximum height of 2.1 metres. Simply pushing the speaker back into the sub unit latches it into place.

A single Soundcaddy One operates as a stand-alone mono PA system, complete with its own built-in four-channel mixer. Because the system is designed as a miniature line array — with six 3.5-inch mid and high drivers supported by a 3x6-inch subwoofer — it has a usefully wide 70-degree dispersion in the horizontal plane. It also a much more limited vertical dispersion than non line-array designs (15 degrees), making it easier for you to direct the sound where you need it. The 600W class-D amplifier is entirely integrated, so all you need to do to get it up and running is connect the IEC mains power with the included locking cable and plug in whatever inputs you want to use. 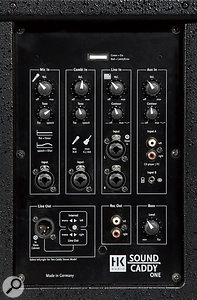 The EQ controls are optimised for purpose, with Tone providing a mid-frequency boost for vocals and Contour creating a 'smile curve' to boost the clarity of line sources.

The Soundcaddy's mixer provides two mono channels with Volume and Tone knobs and Neutrik Combo connectors. Note that there's no phantom power, so mics that require it will need to be connected via a separate preamp or an in-line power supply. The Tone knobs are optimised for voice, and provide a mid boost when turned clockwise.

There are two further stereo channels for line or auxiliary inputs, each with its own volume and Contour control. Contour boosts the high and low frequencies while rolling off mid-range, generating a 'smile' curve. At its minimum setting, however, the Contour control has no effect at all. One stereo input is equipped with Neutrik Combo inputs, while the other has RCA phono connectors and a 3.5mm stereo jack plug, which can be used with MP3 players and the like.

An XLR line out is available for sending the mixer signal to a second Soundcaddy One or other powered speaker system, and can be used to double the power of a mono system or create a stereo system, depending on the setting of the Mono/Stereo switch. An RCA 'Recording' output can be used to route the mixer output to pieces of equipment at line level, and there's also a separate level control for the subwoofer, offering up to 10dB of cut.

My practical test for the system was to amplify a female singer and piano playing on a park bandstand, a test that exposed both strengths and weaknesses. There was no problem with sound quality: we got a clean, virtually hi-fi standard of sound that carried well. Indeed, it was the onset of acoustic feedback rather than the power of the system itself that set the limit on the volume.

The first down side I noticed was that there wasn't really enough gain available in the mic preamps to drive the system hard unless your singer has a very loud voice, though in this instance I was also using a vocal processor and preamp to add some reverb, and this was able to send an adequately high signal level to the Soundcaddy. I'm sure the mic amps would have enough gain for conference work and other indoor events, but they could struggle at gig volume, especially as there's no phantom power for connecting more sensitive capacitor microphones.

Also, since the mixer is designed to be fairly simple, there's no master level control, meaning you have to adjust each input individually to change the overall volume. My other minor niggle is the small size of the castors: although the unit is easy to move on a smooth floor, you'll probably have to pick it up or put it on a folding truck as soon as you hit the car park.

Those relatively small factors aside, the Soundcaddy is a dream to set up, and its rising line array attracted a certain degree of interest from onlookers. The wide dispersion of the line array really paid off, giving broad coverage from a single unit, though with any line array you have to be careful to set the speaker height appropriately for the audience, as the vertical dispersion is pretty tight.

Vocals came across clean and true, with no need to adjust the on-board EQ. The piano also sounded clean and well-balanced with a nice low end, though again I would have liked more channel gain, as both the line input channel and the piano output were close to maximum. At gigs I'd imagine most users would hook up a mixer, but if you intend to use the built-in mixing facilities, the lack of gain is something to bear in mind.

The HK Soundcaddy One may seem costly, but it packs a lot of high-quality sound into a very small space, and can easily be expanded by adding a second unit or another powered speaker, though for venues big enough to justify a pair of Soundcaddys, the HK Elements system might be more cost effective. The built-in mixer is pretty basic, but it's still flexible enough for many applications despite the gain issue. It also counts in the Soundcaddy's favour that, at the end of the performance, I had the system unplugged and off the stage in well under 60 seconds.

As far as I can tell the Soundcaddy concept is unique, though compact line-array solutions include HK's own Elements system, as well as systems from Bose and Fohnn.

The HK Audio Soundcaddy One provides very high-quality sound at moderate volumes, and does so in a format that's portable and extremely easy to set up. Depending on your use, you may need a separate mixer in order to give you phantom power and sufficient gain for some instruments and microphones.