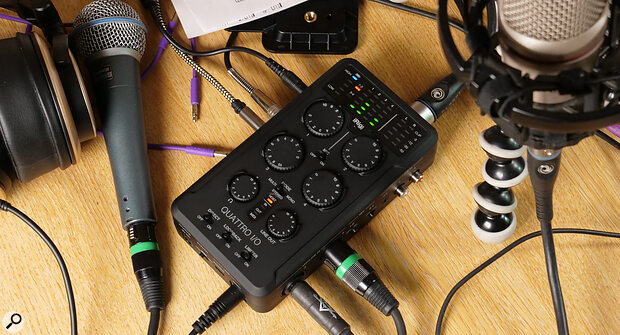 IK’s new interface is designed to go anywhere and record anything.

The iRig Pro Quattro I/O mixes mobile recording with multi‑channel audio, professional connections, metering, mixing and adaptation in a chunky hand‑holdable device. Is this the supercharged iRig interface we’ve been waiting for?

My first impression is that it’s surprisingly large in all dimensions. It’s not heavy but is quite chunky in the hand. It has a nicely grippy rubberised texture to it and all the connections on every surface make it look multi‑functional rather than beautiful. It’s got sockets all over the place. It looks every bit like a field recorder with those low‑profile, thumbable knobs, metering display and the adaptor that could let you mount on anything from a tripod to a camera shoe. Except that it doesn’t have any ability to record.

IK Multimedia have highlighted the lack of recording ability as a ‘feature’ because you’re not going to need any of those annoying SD cards. What you do need is a computer, phone or DSLR, and that, at least for me, makes it feel like it could be a bit cumbersome in the field. However, independent field recording is only one possible scenario and there are plenty others where the Quattro might well show its quality.

The iRig Quattro I/O is a four‑channel battery‑, USB‑ or DC‑powered audio interface. It has four phantom‑powered microphone combi XLR inputs that can double up as two instrument and two line‑level inputs. Further alternative line inputs are provided on RCA phono and mini‑jack, so you won’t need to be carrying a pocket full of adaptors. For outputs you have a pair of balanced XLR connections plus a mini‑jack line output and mini‑jack headphone output. Finishing it off is MIDI in and out on those annoyingly smaller‑than‑mini‑jack sockets IK like to use. But you do get one 5‑pin DIN MIDI adaptor in the box.

The Quattro also has a switchable in‑built omnidirectional microphone for simple and easy sound capturing. It appears at Input 1 and can be controlled via the same gain control. Alternatively, you can plug in a pair of condenser microphones, like the iRig Mic XY (not included) to make it look even more like a field recorder.

The included cable set is worth a mention. The Quattro uses a 7‑pin ‘Host’ connection rather than regular data ports, but this allows them to supply the right cable for every eventuality. Along with USB A you get a cable with a Lightning connector for iPhone and iPad connection, and a USB C connection for computers and most Android devices. There’s an additional micro‑USB port that’s expressly for power when working with low‑power devices such as phones, and you don’t have any batteries to hand. That’s a very welcome sight and simplifies the connections when using a phone. Although it doesn’t pass through power, which is a shame, you can also power it from an IK Multimedia power adaptor (not included), which will power your device as well.

The cables are a bit short, so the Quattro and your phone/tablet/laptop have to stay pretty close together. It’s not a major problem but the Quattro does have a threaded adaptor on the back for using with cameras or mic stands, so unless you’re using it purely in mixer mode then...