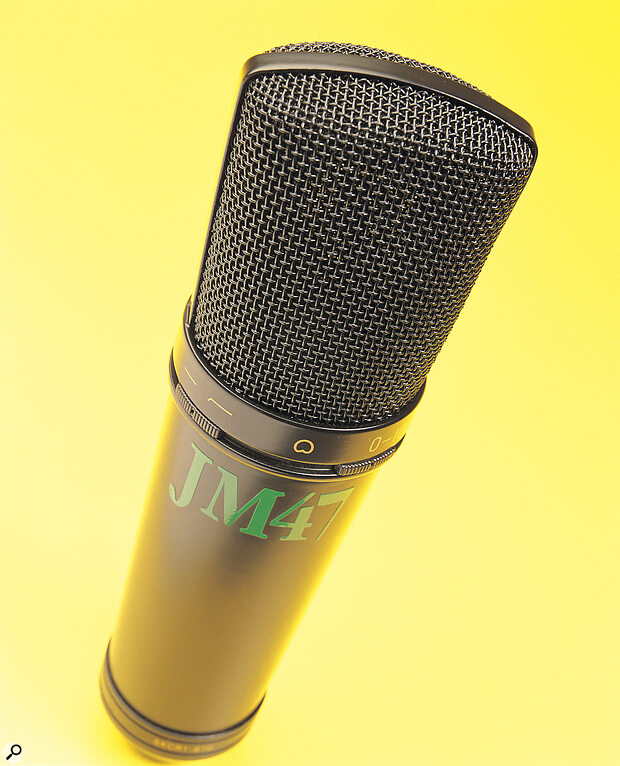 Paul White tries out a Joemeek product that, for once, isn't entirely green — but finds there's still a lot for the competition to envy.

It sometimes appears as though Joemeek just think up names, then design products to fit them, but I'm assured that's not the case. Take the JM47 Meekrophone for example: a silly name, sure enough, but Ted Fletcher has been experimenting with microphone design for around 30 years, so it was always on the cards that he'd put one into production. The JM47 Meekrophone comes in a custom aluminium camera case with a mic cable and a serious metal shockmount. It's also available as part of the TrakPak, a bundle combining the mic and accessories with a Joemeek VC3 Pro Channel voice channel and a mains power supply for the VC3. The VC3 is a 1U, half‑rack‑width preamp, built around a mic/line input stage with a separate Mix input allowing a further line‑level input to be combined with the main signal source. The signal then feeds a Joemeek optical compressor, followed by a flexible enhancer. As we reviewed this latest version of the VC3 in the June issue of Sound On Sound, I'll concentrate on the JM47 microphone.

As with a number of low cost capacitor microphones, the Meekrophone is manufactured in China, but, in this instance, to Ted Fletcher's specifications. This particular model features a large, true‑capacitor cardioid capsule with a sputtered gold mylar diaphragm and combines an FET preamp with a transformer output stage. The capsule uses traditional centre‑electrode construction — Ted Fletcher explains that the policy of technology‑sharing within the former communist bloc enabled the Chinese to make use of technology originally developed in Germany by certain well‑known mic companies. A novel feature of the electronic circuitry used in this microphone is the use of dynamic feedback at the capsule element to reduce distortion.

Mechanically, the mic is tough and neatly assembled, with the electronics mounted on two glass‑fibre PCBs bolted to the chassis. The components are good‑quality without being esoteric, and the output transformer is integral with the balanced XLR output connector. The housing is machined from brass, and the whole mic is finished in what looks like a black powder coating with the JM47 logo boldly printed in the familiar green. The shape of the mic is, let's just say 'classic', with smooth‑operating slide switches which operate a 10dB pad and a low‑cut filter (the shelving frequency of which is not specified).

I tested this mic side by side with a Rode NT1, as they're in the same price bracket and have very similar capsules. The sensitivity of the two mics is almost identical, and on first hearing they're also quite similar tonally, though prolonged testing shows up subtle differences, no doubt due mainly to the differences in the electronic design. Tested with both voice and electric guitar, the NT1 seemed to have a slightly 'bigger' sound, while the JM47 Meekrophone sounded just a hint crisper and more controlled. Both attributes are useful in different situations, so it's not really possible to say that one or other is the best, and in most 'normal' applications, both can produce excellent results. Either way, the JM47 has the essential smooth, open quality of a good capacitor microphone and I'd have no qualms using it for just about any task other than close drum miking (I wouldn't trust the drummer not to hit it!). The shockmount is a snug fit, and the supplied lead is of good quality.

At the asking price, both the mic itself and the TrakPak are excellent value. The latter is particularly impressive, including as it does a good capacitor mic, a very flattering‑sounding preamp/compressor and a secure shockmount. Everything fits snugly into the supplied foam‑lined camera case, and even though the VC3 uses a wall‑wart power supply and doesn't fit into a standard full‑width rack, it's actually a really nice mic channel with a great‑sounding compressor. The mic is generally comparable with the Rode NT1 as regards build quality and sound quality, though as pointed out in the review, there are subtle tonal differences. It's certainly an excellent mic at the price and it's one you won't grow out of.

The Meekrophone is a good‑sounding capacitor mic that represents excellent value, while the optional TrakPak provides a one‑box‑solution mic and mic preamp kit suitable for almost all hard disk and traditional recording applications.