If the name Ken Scott means nothing to you, you really do need to read up on recording and production! His CV as engineer and producer is peppered with credits for work with rock royalty, including the Beatles, David Bowie, Elton John, Supertramp, Pink Floyd, Lou Reed... I'll stop there, or I could fill up this issue just listing names.

Over the course of that career, Scott has recorded more drums and worked with more drummers than you've had cold snacks: recording and mixing acoustic drums is something that this guy knows more than a thing or two about. Having already worked with Sonic Reality to put his knowledge and skills into the creation of a very capable software drum instrument, Epik Drums (www.epikdrums.com), and having worked with some great drummers, and various drum kits, other percussion instruments and genres in the process, Scott has turned his attention to explaining how he records and mixes drums. 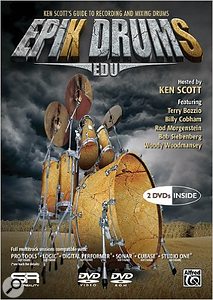 The result is Epik Drums Edu: Ken Scott's Guide To Recording & Mixing Drums (Alfred Publishing), which takes the form of a two-DVD set comprising the tutorial videos themselves and links and codes to access a wealth of supporting material, including both multitrack audio files to practice on and project files for most major DAW software, to get you up and running quickly. Guesting on the videos are a number of the world's leading drummers, each famous for a different sound and feel: Terry Bozio, Billy Cobham, Rod Morgenstein, Bob Siebenberg and Woody Woodmansey. These guys don't just drum, though, they talk about working with Scott over the years, which I found interesting in itself.

If I'm honest, I usually find such instructional videos to be rather a mixed bag, in that they can seemingly take hours of viewing to discover only a few pointers. In some respects, this one is no different, in that it's definitely a good idea to have the DVD remote handy to speed up the viewing process. That said, the balance is much better struck here than in most similar products: you need to be pretty careful not to skim-view in too little detail if you're to unearth the various gems of recording wisdom that fall from Scott's lips.

Scott kicks off by running through the typical drum types used by each drummer, and talks about what it is that makes the individual kit pieces sound different. It's all pretty run-of-the-mill but nonetheless very useful stuff, and an essential grounding if you don't know it. But he moves on quite quickly to start revealing those gems I mentioned — and while which bits you deem to be gems will depend largely on what you already know, there'll be plenty here for most recordists. For me, a big "why didn't I think of that!” moment was when Scott casually started talking about opening up a drum to install an Electrovoice RE20 in a cradle of cables inside the drum, before replacing the resonant head — just so that he could get close to the batter head without removing (or carving a hole in) the resonant head and thus sacrificing the tone of the drum. Another was when he revealed his emergency resuscitation technique for breathing new life into the dying batter head on a snare drum — using a cigarette! The video is littered with useful practical tips like that.

This DVD isn't just about instrument setup and recording techniques, though, as Scott pays just as much attention to mix processing. He illustrates his examples using Pro Tools and (largely) UAD plug-ins, which makes things easy to follow. What's interesting is how little he does in terms of processing — but he talks you through what he does and why, so you're able to make similar decisions.

For newbies to drum recording (or, indeed, production in general), this DVD will be pure gold, and the seasoned amateur recordist will find more than enough in here to justify the modest asking price — and there should even be the odd interesting nugget in here for seasoned pros. Recommended viewing.