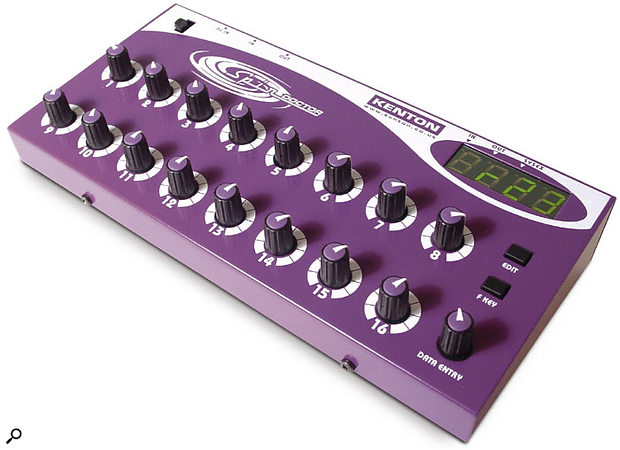 Kenton's affordable MIDI controllers continue to come down in price — the new entry-level rotary-control Spin Doctor offers a lot of control (and controls) for a mere £125!

Kenton's Spin Doctor is their new new entry-level, user-configurable MIDI hardware controller, with 16 control knobs that can be used with virtually any piece of MIDI equipment (actual or virtual) to provide real-time, hands-on control. Where MIDI Controller data is being used, all the knobs can be programmed from the front panel, though where SysEx or NRPNs are involved, the included PC and Mac editors are required (at the time of this review, the Mac editor had to be downloaded from the Kenton web site). The Mac editor is in fact the same as used for Kenton's earlier Control Freak Studio/Live controllers and profiles can be exchanged between the two platforms, albeit with the limitation that buttons not present on the Spin Doctor are ignored when a Control Freak profile is loaded. There are numerous 'profiles' available for free download via the Kenton web site (of which more in a moment), so you probably won't need to do any programming if what you're controlling is in fairly common usage.

Powered by the inevitable adaptor, the Spin Doctor is packaged in a plum-coloured steel box with 16 programmable rotary knobs on the top, in addition to a further Data Entry knob, Edit and 'F Key' buttons and a power switch. A four-digit, seven-segment display provides user feedback when editing or operating the unit. The rear panel houses MIDI In and MIDI Out sockets, and the Out features a merging Soft-Thru function, enabling the Spin Doctor to be used at the same time as a controlling keyboard or other MIDI device.

The unit provides 25 user memories, in which the knobs can be set up to send any MIDI message, including multiple and inverted messages. Stored profiles may be sent to or from external devices using SysEx and a simple but useful Snapshot function outputs the values of all the current knob positions. The Spin Doctor also includes a basic MIDI analyser mode that can be useful when tracing faults.

While the Spin Doctor has obvious applications controlling hardware and software synths, it may also be used to control the virtual mixer faders (or other controls) of the mainstream sequencer packages, including Steinberg's Cubase VST and SX, Emagic's Logic Audio, Cakewalk's Sonar and Cakewalk Pro Audio, and so on. It also doubles as a budget expander for users of the existing Kenton Control Freak models (see the review of the Control Freak Live in SOS December 2002, or point your browser at: www.soundonsound.com/sos/dec02/ articles/controlfreaklive.asp).

Used with the appropriate editing software, the Spin Doctor supports all types of MIDI messages. While editing from the front panel is restricted to controller data only, the Spin Doctor is compatible with profiles already developed for the more expensive Control Freak Studio Edition and Control Freak Live units and many are available for free download from the Kenton web site (a full, frequently updated list can be found at: www.kentonuk.com/download/ cfrk_full_prof_list.pdf, and is less than 20K in size).

Because the Spin Doctor has a merge function, it can be inserted between a controller keyboard and a sequencer. In this configuration, the Spin Doctor automatically relays whatever it sees at its MIDI In port to the MIDI Out along with any control data it generates. 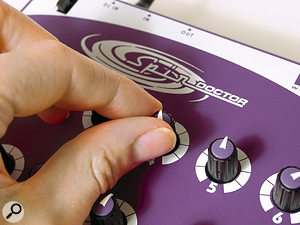 On power up, the display scrolls the name Spin Doctor, and then loads Program 0, a factory default that controls MIDI volume (controller 7) on MIDI channels 1-16. Five other memory slots are also pre-loaded with useful factory configurations where Program 1 accesses Pans on MIDI channels 1-16, Program 2 sends Controllers 1-16 on the globally set MIDI channel and Programs 3, 4 and 5 send Controllers 17 to 32, 33 to 48 and 49 to 64. The remaining memory locations are unfilled and in normal use, the data-entry knob switches between patches. Note that only the data-entry knob is a continuous controller, so in most applications, the physical knob positions may not be the same as the stored values unless you've just changed the value. This is especially true when using different patch locations to control say, the pan, levels and aux sends of a sequencer's mixer. Every time you change function, the knobs don't match up with what the mixer is doing until you make a change. This is very frustrating if you've already got used to working with a moving-fader interface, but you have to remember that the Spin Doctor is a budget solution.

Pressing and then releasing the Edit button after switching on the unit causes 'PSEL' or 'Program Select' to appear in the display window, after which the name of the current program is scrolled across the four display characters. Once this little routine is over, the display reverts back to the current patch number. To get into Edit mode, it is necessary to hold down the Edit button while turning the data-entry dial and then use this to scroll through the edit modes until you find the one you wish to use. At this point you release the Edit button whereupon the data-entry knob changes the currently selected parameter value. The various edit modes are 'PSEL' (the normal 'in use' mode where you can select patches using the data knob), 'chAn' (Global MIDI channel), 'butn' (the different options for the 'F Key' function in the main level, of which more in a moment), 'PSnd' (which sends MIDI program change messages from 0-127 selected using the data-entry knob), 'ScrL' (text scrolling speed), 'MAP' (with which profiles can be mapped to a desired patch location), 'dMP' (which dumps a Spin Doctor profile as SysEx data), and Edit (which selects the MIDI controller number to be sent by the knob being edited). It's worth noting, though, that the global MIDI channel can be overridden by MIDI channels defined within specific patches or knob setups created using the editor software. 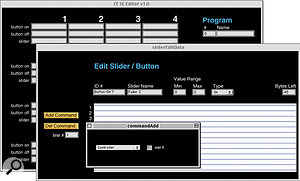 The Spin Doctor's Mac-based software editor.Whenever a knob is turned during operation, its MIDI value is shown in the display and the MIDI Out indicator confirms that MIDI data is being sent. A useful feature is that pressing the Edit button mutes the MIDI Output until the button is released again.

At initial power-up, the 'F Key' button sends a 'snapshot' of all 16 knob position values to the MIDI out, although as with the Edit button, this can have multiple functions that you can select using the 'butn' page while in Edit mode. The alternative 'F Key' modes are Snapshot, Reset all controllers, All notes off, GM reset, XG reset, and VST Mixer (useful when employing the Spin Doctor with Cubase VST/SX profiles). If the Spin Doctor gets its brains scrambled for any reason, you can initiate a factory reset, but any user programs will be lost and so will need reloading. Factory patches are not lost during this process.

Although you can program virtually anything using the software editor, I suspect most users will either use simple controller data or try to find existing profiles where possible. These are loaded into the Spin Doctor as MIDI files played from within any sequencer (provided it is capable of sending SysEx data). Profiles are loaded one at a time, but note that Spin Doctor is not compatible with the profiles from the original 1998 Control Freak, only the more recent Live and Studio versions.

To call up the MIDI Analyser Mode, power up while holding down the 'F Key' button, then use the data-entry knob to choose the type of MIDI message you want to monitor. You can choose to look at note numbers, velocities, controller numbers, program change numbers, pitch-bend and aftertouch data. The unit can also monitor SysEx activity, MIDI Clock (with Start and Stop) and MIDI data byte values. A lookup table is included in the manual to translate the Hexadecimal display values into MIDI message types.

For most basic applications, you can set up Spin Doctor from its front panel to send controller data, and once you've set the basic MIDI channel, it's a simple matter to pick an empty or unwanted preset, enter edit mode, select the last of the edit functions, 'Edit', then use the data-entry knob to define which of the 16 knobs you want to program. Once you've chosen one, you use the knob to dial in the correct controller number, then press 'F Key' to store your change, then move on to the next knob. When all 16 knobs are programmed, leave edit mode and you have yourself a custom preset. Mostly this is no more difficult than looking up the controller numbers in the manual of the piece of gear concerned, though you have to be careful when adjusting the knobs as they tend to jump between digits rather too easily, so when you're trying to enter, for example, 15, you may find the display hopping to 14 or 16.

As explained, the included editor is needed for anything more elaborate than controller assignments, and although the data-inputting interface on the Mac version is fairly straightforward-looking (see screenshot above), you have to know a fair bit about MIDI protocols in order to provide data that makes sense. It's a bit like filling in a tax return, and once it is completed, it can be sent to the Spin Doctor as a program dump. Mac OS 9 users must of course use OMS to establish MIDI communication.

Conceptually the Spin Doctor is very simple, and is probably intended to be used mainly as a generator of controller data — a job it does perfectly well within the obvious limitations of using pots rather than continuous encoders or motorised faders. However, it's rather encouraging that on such a budget product, Kenton have also provided a means for the more ambitious programmer to use a software editor to create more complex MIDI control systems involving SysEx, NRPNs and so on. You can even set different MIDI channels for different knobs where necessary, so Spin Doctor isn't limited in what it can control. In reality, many software-based instruments and mixers can be controlled using simple MIDI controllers, and if there isn't a profile already set up for you, creating your own is trivially easy.

Any budget controller is a compromise, especially when it comes to providing positional feedback for the controls, but Kenton have done a fine job in designing a simple, affordable controller that performs as well as its design budget could possibly allow. Anyone wrestling with a software mixer or virtual instruments and who wants to get hands-on control without spending too much money should take a closer look at Spin Doctor.

Kenton have succeeded in producing a hardware controller that most people can afford and that few will find difficult to use. It can also be used in a much more sophisticated way via the included editing software.