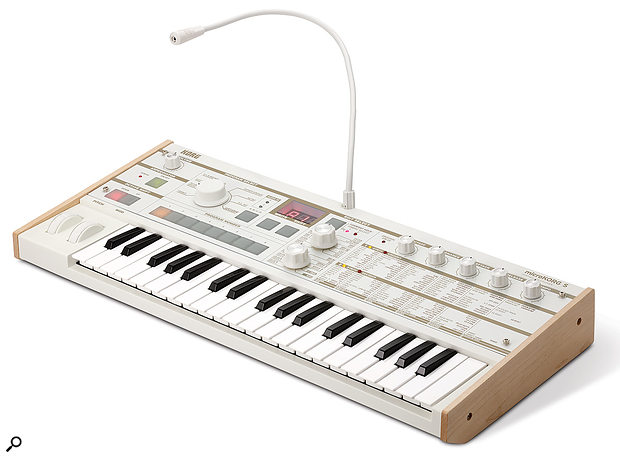 How do you follow the best-selling synthesizer of all time?

Korg’s MicroKorg is the world’s best-selling synth, and the 2002 hit that shows no signs of fading away. Despite the release of the MicroKorg XL (with its superior synthesis but subdued retro interface), Korg have reverted to the model that started it all, bringing it up to date with a stylish white look and white knobs. Whether it’s classic guitars or classic synths, it’s hard to deny that many jobbing musicians prefer continued production and gradual evolution to the endless cycle of starting over. Therefore the MicroKorg S (for Speaker) does not replace the original but slots in between it and the XL+. The speaker is the most obvious difference, but the S also has double the patch capacity and a set of convenient favourite slots. Might these be enough sweeteners to prolong the MicroKorg’s success?

Korg have hardly tampered with the externals at all, adjusting only the colouring, which is even more attractive than the limited-edition gold and brown model from a few years back. The cream panel with its gold graphics and text looks plush, as do the white knobs and performance wheels. I was less impressed by the wobbly condenser microphone, though, so borrowed a pal’s original MicroKorg for comparison. Sadly he’d lost the mic so I can’t report whether the ‘drunken worm’ supplied with the new model is authentic. When vocoding, I’m afraid I mostly kept it in position with my lips, so apologies to whoever plays the review model next.

Deeper examination reveals a couple of subtle changes. For a start, the current power supply doesn’t fit the classic and the S’s power switch is a ‘soft’ type, ie. one you need to physically press for every power up. Interestingly, there isn’t a grill for the speaker. This is set in a plastic enclosure in the bowels of the instrument and the sound therefore seems to emerge from the synth’s whole body. When placed on your lap and given loud, low notes, the resulting vibrations could be a fun alternative to a TENS machine. At full volume you can easily dominate the average lounge, although the speaker doesn’t always handle chords without distorting. For obvious reasons it’s very slightly heavier than the original and as before will run off six AA batteries.

The MicroKorg dates from happier times when important inclusions such as MIDI Thru were common, even on ‘budget’ instruments. A few quick A/B comparisons were sufficient to establish matches in all other areas, meaning it’s a step back to tiny, bouncy keys rather than the improved action of the XL. Indeed, all the enhancements that grace the XL model — increased polyphony, PCM samples and richer, more complex synthesis — are abandoned in favour of the earlier spec. The upside of this is that patches created on an original (and the MS2000) are 100 percent compatible.

Given the ubiquity of the MicroKorg, I suspect most SOS readers will have encountered one at some point, but for those recently arrived from the Planet Nibiru, we’re talking about a compact (524 x 232mm) four-note polyphonic synth/vocoder with a credible-sounding analogue-modelling engine that’s bolstered by digital waveforms, an arpeggiator, delay and modulation effects. One of its great strengths is having every parameter printed on the panel, in text marked for either Synth or Vocoder. In edit, its ‘pass-through’ mode works splendidly, the display flashing a reminder of the stored value you must reach before the knob will work. These simple design choices render the MicroKorg one of the most approachable matrix-based synths ever, even if the choice of patch selection by category feels a bit clunky. Actually, the categories were probably contentious even when the synth was new, but for the record, they are: Trance, Techno/House, D’n’B/Breaks, Hiphop/Vintage, Retro, SE/Hit and Vocoder. In the S model, the bank button steps through four banks (A-D) to reveal a quite respectable 256 patches — double that of its predecessor. Personally, I’ve never grasped the distinction between ‘vintage’ and ‘retro’ and if I owned one, I’d be tempted to add some (removable) labels with categories such as bass, pads, weebles, gratuitous arpeggiation and so on. Regardless of category incongruities, finding your way round is easy. The chunky Program and Edit selection knobs feel particularly solid, but the five smaller versions for editing and general tweaking are less confidence-inspiring. Still, they’re exactly the same as the original sat here, whose knobs are still going strong.

Trawling through the factory banks you start to understand the staying power of this little plastic marvel. It’s packed with excellent examples of the sounds people typically want from a synth; so expect flowing, liquid leads, chest-pounding basses, bouncing arpeggios, deep, mellow pads and much more. That it works so well is no mean feat for a four-voice synth that drops to just two voices when layering is used. Bank D is initially empty, awaiting your inspiration or, if you’re impatient, a quick cruise of the interweb for downloads. The patches in Bank A are all new, apparently, although I’d overwritten half a dozen before learning this.

Of the patches new in this version, many are bright, tinkling and designed to impress. They include dual-layered combinations of arpeggiated kick/hat beats with fat, phasey pads — all from one note. A couple of the electric pianos caught my ear too (A55 and 56), with the first of these completely effect-free but still fabulous.

Each bank has a selection of vocoder patches and with these it’s clear this eight-band model isn’t Korg’s best — but it’s fun, fast and good to have all the same. Keeping track of everything isn’t always straightforward, though, but if you hold down the Bank button for a few seconds, you gain immediate access to eight favourites. This is just the thing when you can’t remember whether you filed that lush pad from yesterday in Vintage, Retro or Electronica.

All the sounds can be completely overwritten and it’s a testament to Korg’s modelling that the synth engine still has so much to give. Its oscillators feature sync and ring modulation, the modelled filters are as lush as ever and the effects, although not extensive, are well chosen. There’s even an option missing from Korg’s recent Minilogue: ‘envelope reset’. If you set this to ‘off’, the MicroKorg effectively mimics analogue hardware, in which each attack phase starts not from zero but from the current level. Sweet!

The MicroKorg S is seductive and toy-like, but its popularity can’t only be about size and portability. It’s possible that its appeal is forever beyond analysis, but it appears to have exactly the right amount of depth and complexity for its form. Of course, reviewer types rarely fall in love with tiny keys, but perhaps even these are significant, with the need to develop new playing techniques acting as a leveller? Until Korg risk a version with slightly larger keys, we’ll probably never know. In the meantime, it’s business as usual. The inclusion of a speaker is ideal for jamming in the park or a spot of busking, the factory sounds are of a uniformly high standard, and the extra memory and favourites are welcome too. I could go on, but the MicroKorg S probably doesn’t need any help. I suspect it’ll do well by the simple reason of existing.

Korg’s own MicroKorg XL is the next step up in the family, concealing a more powerful and polyphonic synthesizer behind a minimalist retro facade. If battery options and speakers aren’t important, other alternatives should include Novation’s Mininova or the more expensive Roland JDXi, both with more complex synthesis and greater polyphony, but not the instant recognition factor that has served the MicroKorg so well.

The MicroKorg is so well-established it feels almost beyond criticism. Past reviews may have baulked at the tiny, bouncy keyboard or limited polyphony, but vast numbers of punters looking for portable, great-sounding fun didn’t care. The fact that not even Korg could match the success with subsequent models suggests the MicroKorg — in this form — is nearly perfect already. Adding a speaker and doubling the patch capacity is simply icing on the cake.