Lauten’s latest creation is a classy affair with a pleasingly neutral tonality, which should make it suitable for a wide range of sources.

Lauten Audio have been in the mic business for around a decade now, and their ethos is to create original-sounding microphones rather than chasing the sound of vintage classics. Their mics are modestly priced, yet their web site includes enthusiastic testimonials from numerous industry professionals. The LA-320 reviewed here is a large-diaphragm capacitor mic with a fixed cardioid pattern and a dual-triode valve preamplifier. One departure from tradition is that the mic has separately switchable high-pass (120Hz) and low-pass (12kHz) filters, but no pad switch. In other respects it looks conventional, with its cylindrical form factor, black-paint finish and classic basket construction. It ships with a wire-frame ‘spider’ shockmount, a five-pin cable and a dedicated power supply with mains lead, and is packed in a foam-lined camera-style case. As is so often the way these days, the mic was designed in the US but is built in China. 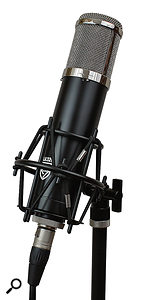 At the heart of the mic is a one-inch, gold-sputtered capsule, the ensuing valve circuitry then feeding an output transformer for balancing and impedance matching. Since it’s a valve mic, phantom power is not required, although the PSU is happy to tolerate it if it happens to be switched on. A five-pin cable connects the mic to the external power supply, which can be switched to match the local mains voltage. The signal exits the PSU on a conventional, balanced three-pin XLR.

Much of the spec is typical of what you’d expect from a mic of this type, with a 20Hz to 20kHz frequency range, an equivalent input noise (EIN) of 17dBA, a maximum SPL of 130dB and a sensitivity of 14mV/Pa. However, the frequency plot deviates from what you might expect, in that there’s no presence peak. In fact there’s a very slight dip across the upper mid-range relative to the low end. Should that be described as an ‘absence’ peak?

Unscrewing the base of the microphone reveals a typical Chinese-made chassis, but the circuit board is of higher quality than you might expect from a Chinese microphone, and is populated with decent capacitors and metal film resistors, with the audio transformer mounted just behind the output connector. The valve is a Chinese-made 12AX7 (ECC83) and is fitted securely in a ceramic base that’s supported on its own circuit board.

In use, the mic delivers a very natural and open vocal sound, and the absence of any deliberate presence peak makes it easy to adapt to a range of voice types using just a little EQ. Surprisingly for a mic with no treble lift, vocals still manage to sound close to the listener, with a nice balance of high-end detail and weight in the lows. Bringing in the low-cut switch has a noticeably effect on the vocal tone, which may be too much for those singers who work a few inches back from the mic, though it balances the proximity effect pretty well for those working very close. In a typical recording situation I’d be more likely to leave the low-cut filter out and maybe use an 80Hz low-cut filter on the mixer or interface.

The 12kHz high-cut switch further smooths out the top end without causing obvious dullness, but again it doesn’t really do anything you couldn’t handle on the mixing side. Used without a pop shield, the mic has a better-than-average resistance to popping, but I’d always use one as a matter of routine, as the better ones have no significant effect on the sound. 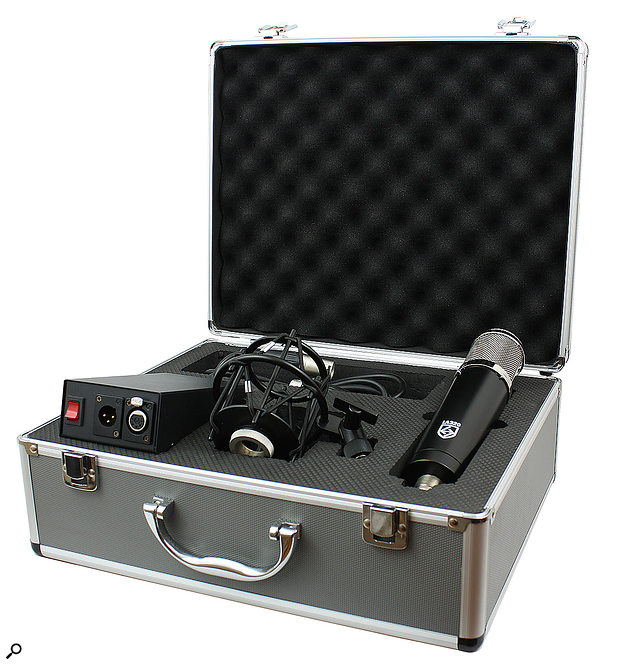 The LA-320 ships in a smart carry-case, along with its PSU, shockmount and five-pin XLR cable.

Switching to acoustic guitar, the LA-320 again produced a much more natural sound than I’d have achieved using a mic with a lot of upper-mid ‘voicing’. Everything sounded clean, detailed and solid, with no nasty grittiness in the high end, and although I usually gravitate towards small-diaphragm mics for acoustic guitar work, I’d be more than happy to use the LA-320 for the job. As ever, you have to work a little to find the sweet spot, but this mic seemed pretty forgiving in this respect, so a little movement on behalf of the player shouldn’t upset it too much.

As a last experiment, I set up the mic in front of a drum kit around five feet from the ground to see how it would fare. The results were actually quite usable, though it needed some gentle 250Hz cut to clean up the boxiness. Cymbals also came over cleanly with no harshness, and the mic seemed particularly kind to the toms, so it would definitely worth trying the LA-320 as an overhead drum mic.

Overall then, the LA-320 comes over as a classy-sounding all-rounder, especially given its attractive price. Its flatter-than-usual frequency response makes it very versatile and it seems to cope well with instruments as well as voices. Of course there is a lot of competition in this area and every mic has its own sonic signature that may or may not suit a particular vocalist, so if the mic is mainly for your own vocal use, it pays to audition it alongside as many alternatives as possible.

There are many possible alternatives, but the MXL Genesis is one that springs to mind. Slightly higher up the food chain is the well-regarded Sontronics Aria, but it may also be worth trying some non-valve models with transformer outputs to see what works for you.

The unusually flat response gives this mic a slightly different character from most of the competition, and makes it easier to fine-tune the results using EQ. The valve warmth is present but not overbearing, while the valve/transformer combination contributes to a smooth but still detailed high end.