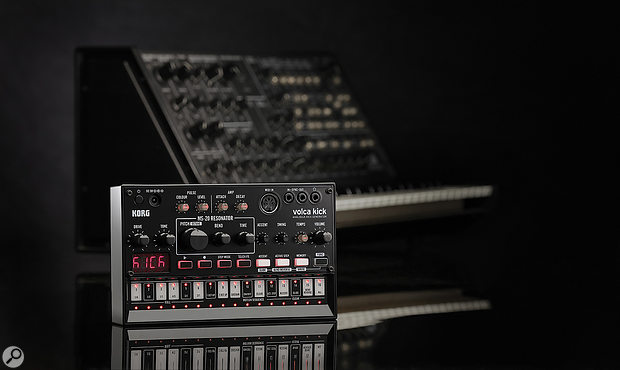 Korg’s latest Volca is one you might possibly have overlooked, or at least only glanced at briefly. After all, it does just one thing: analogue bass drums. For this, the Volca Kick borrows the resonant filter of the Rev1 MS20, beefs it up with analogue drive, and adds the usual complement of knobs and a sequencer with motion recording. Throw in a few handy performance features and batteries so you can take it anywhere and you’ve got a Volca that clearly knows its place in the world, which is more than can be said about some countries these days!

I think I’m on safe ground in assuming that most SOS readers know the score with Korg’s Volca range. They’re solid little plastic boxes designed for instant gratification and easy integration into a variety of setups. They each have an internal speaker and can run off six AA batteries (supplied) or an optional 9V adaptor. The speaker is more effective on some models than others, and I doubt you’ll be surprised to learn that this one falls firmly into the latter category. Connect the mini-jack headphone socket to your regular studio monitors, though, and be prepared for a low-frequency revelation. This Volca does indeed specialise in one thing, but it’s a thing central to many genres of electronic dance music.

The simple black and white styling establishes a no-nonsense approach from the outset, and with its red four-character display, pattern memory and motion recording, this kick generator offers more control than any but a handful of high-end analogue drum machines. The central MS20 Resonator is where the main action takes place; the MS20 filter has long been known as a lively source of percussion and here it goes into overdrive — literally. The largest knob sets the pitch of a waveform that’s a dirtier version of the sine wave we usually associate with high resonance. This is accompanied by controls to set the pitch-bend time and amount. From these three simple parameters you can quickly and reliably discover a terrific spread of deep, pumping kicks, toms and even synth basses.

If you draft in the Func key while turning the pitch knob, the base pitch is transposed upwards by as much as four octaves. Therefore, despite its name, the Volca Kick is not limited to kicks at all. While it doesn’t quite reach the plinky heights of claves, it will easily turn out rimshots, congas and a plethora of zips, blips and pips.

When the pitch knob is turned all the way to the left, the resonant waveform can be played chromatically. To best exploit this capability, the 16 step keys are laid out like a keyboard, its range just over an octave (A-C). It’s a pleasant experience to play bass lines, melodic patterns and so on from a machine that delights in trashing preconceptions almost as much as it enjoys exercising your sub.

Analogue overdrive is on hand to introduce extra aggression and body. You’ll need to be aware of just how much it can crank up the thumps and bumps, though, as the maximum gain increase is fairly intimidating. The drive has an associated tone control ready to give those fat, subliminal kicks and toms a sharp, biting edge. For this, it is ably assisted by another pair of knobs in clear plastic. These determine the colour and level of a pulse waveform, an initial click that ensures the kick can always make its leading edge felt. Colour acts like a basic tone control or filter, after which the pulse transient joins the main resonator waveform in being processed by the analogue overdrive.

Finally, two envelope controls set the overall attack and decay of the VCA. The presence of variable attack is slightly unusual but it allows you to back off or soften a kick in relation to other instruments. Alternatively, it will turn the Volca Kick into a source of rounded, subtle sub-basses or other synth sounds. The maximum decay is around a couple of seconds, making it suitable for boomy 808-type bass drums. 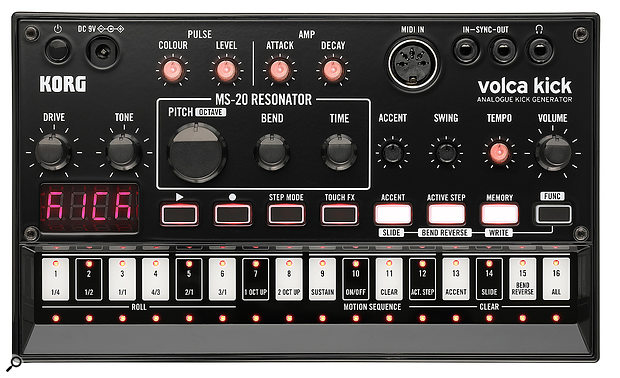 The Volca Kick follows the same format as the other members of the family, cramming a lot of controls into its 193 x 115 mm front panel.

Manipulating the controls by hand, you can unleash some powerful dance-oriented kicks that will never embarrass you. You could, if you wished, use the Volca Kick exclusively as a module, but to exploit all of its magic you’ll need the built-in sequencer.

At the simplest level, you can get your kicks by entering Step Mode and enabling steps, X0X-style. Accents can be added in the same way and the Accent button is placed conveniently beneath its amount knob. To break up those predictable 4/4 patterns, sequences may be shortened using another dedicated button, and all these actions are designed for dynamic use during playback. Naturally, lovers of real-time entry aren’t left out — at a press of the Record button, you can capture notes banged in on the ribbon keyboard.

So far, you’ve got a solid and uncomplicated way of creating patterns featuring kicks or similar percussion. There’s a front-panel knob to add swing too, but since this involves only the even steps, it won’t do much for those four-on-the-floor kick patterns. The even-numbered steps can be shifted by as much as 75 percent forwards or backwards.

Perhaps of more immediate interest than swing are the features that add movement to any pattern: Slide and Bend Reverse. With Slide active, the envelope will not be triggered for the following step and the pitch will rise smoothly between the two steps rather than jumping abruptly. Bend Reverse tells the sequencer to invert the pitch-bend effect on selected steps, which isn’t ordinarily an effect you’d associate with kick drums, but it’s great for adding weirdness, wobble and variety.

In total, there are 16 patterns to populate and any number of them can be chained together to build a longer structure. The only proviso is that chains must be of consecutive patterns, but there’s nothing to stop you chaining all 16. I was already pretty convinced by the sequencer, even before exploring the delights of Korg’s Motion Sequencing.

With the exception of Swing, Tempo and the main Volume control, all knobs are eligible for motion recording. Once Motion Sequencing has been activated, you merely hit record and tweak happily over the length of the pattern. If you can’t capture everything in a single pass, multiple recordings can be used to build up patterns unlike anything heard from the kick drum of a typical analogue drum machine. Some of the example patterns illustrate the diverse, wobbly, percussive delights, but I guarantee they will be forgotten the moment you start making your own.

Having recorded a few tweaks, this Volca leads the pack when it comes to managing and effortlessly discarding specific types of data afterwards. As well as a simple on/off switch and a wipe function for notes and motion capture, it’s an easy matter to clear accent steps and accent level recordings, bend reverses and slides, all of which spurs you on to new heights of interaction.

Speaking of interaction, there are six different Roll settings to play with. Summoned by step keys and our old friend the Func button, these generate drum rolls or repeating notes across the pattern, assuming it contains at least one trigger. If not, the process will dutifully repeat any note played manually on the keyboard. The roll range covers a sedate half speed up to a dizzying 4x speed, with triplets included along the way. Joining the rolls are octave shifts (in which the drum’s pitch is shunted up by one or two octaves) and a neat sustain mode. The latter inserts a short sustain stage between the end of the attack and the onset of decay. The result is an extra period of oomph or emphasis, which combines with slide to contribute yet more variety to patterns.

As well activating rolls, octave shifts and sustain, you can switch into Touch FX mode and use them interactively. Touch FX takes all the printed functions — roll, octave shift, sustain and the motion sequence controls — and applies them in a non-destructive way for as long as you touch a key or keys. With practice, you can apply a roll, shift pitch by an octave and disable slides and accents all at once, assuming your fingers stretch to all the desired keys. Using Touch FX was one of the occasions when I felt the smooth ribbon keyboard wasn’t quite so performance-friendly as a series of buttons would have been, but it’s still fun. The Touch FX don’t appear to be quantised, though, and with my usual clumsiness I managed to set off rolls that didn’t always sound right, especially if I hit a triplet by mistake. I noticed that when notes are being received from the MIDI input, activating Touch FX disables their reception, so it appears to be a function tied to the internal sequencer. Regardless of this minor limitation, Touch FX offers fresh ways to mute notes, fast-repeat them, mask the effect of accent and so on.

In common with other Volcas, there’s a single five-pin MIDI input along with Sync In and Out on mini-jack. I’d have loved to have seen a gate input too and maybe an accent input, for use with a Eurorack system. Maybe some enterprising hacker will find a way to achieve that.

Scanning the MIDI chart (a separate download) confirms that all the knobs eligible for motion recording also have MIDI CCs assigned. So you can play notes chromatically and tweak the parameters from an external sequencer. However, the Volca Kick does not respond to incoming velocity, nor can you enable slides or bend reverse via external means. I triggered the review model from an Elektron Octatrack for a few days, using stored MIDI CCs to set (and parameter-lock) the sounds in each Octatrack pattern. I have to tell you it totally blew me away!

This shiny box of black plastic is a one-trick pony: all it can do is analogue kicks. Underestimate the value of it at your peril! Since the very first Volca, I’ve found myself regularly and pleasantly surprised by their sound and functionality. This one is no exception. In mastering a single trick, this particular pony becomes a solid and tweakable source of synthetic bass drums, which could make it a vital accessory for any drum machine. There’s enough direct control to rustle up other percussion tones if you want them and it will even stretch to synth basses or miscellaneous quirky synth loops.

With 16 onboard patterns, each storing sound parameters and motion recordings, the sequencer is as instantly appealing as any Volca. The extra performance features turn this model into a credible stand-alone instrument, but even as a MIDI module, it could earn its keep.

Sure, the controls are, as ever, on the small side and, admittedly, it won’t cover every type of kick you might ever want. But in terms of analogue power, malleability and interaction, the Volca Kick is an absolute beast. At the price, you might kick yourself if you fail to try it out.

Only a few analogue alternatives spring to mind but none are quite so keenly priced or have a sequencer. They’re led by the Vermona Kick Lancet, which is a rugged little beast with full-sized, chunky controls and connections. Or, if patch memories are important, there’s the Jomox Mbase11. It isn’t very knobby but has full MIDI control of its parameters and over 100 bass drum presets. Both alternatives feature trigger inputs.