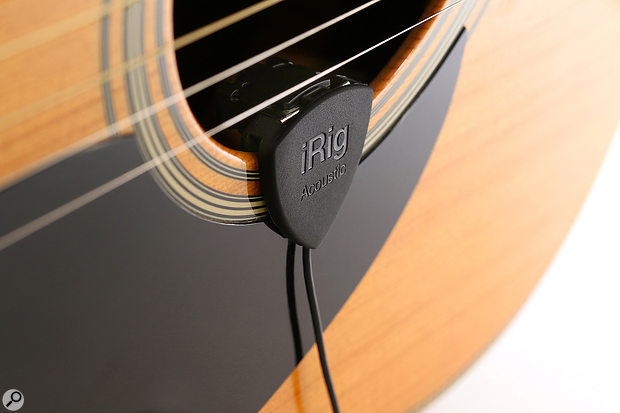 IK Multimedia’s latest gizmo aims to give you a studio-quality guitar sound on stage with the minimum of hassle.

IK Multimedia claim that their iRig Acoustic Stage is able to amplify an acoustic guitar live or in the studio using its clip-on soundhole mic, delivering the same sound character and quality as a studio-miked guitar. A claim like that just has to be explored! Acoustic guitar players never seem to be entirely happy with any type of clip-on mic or pickup system, so if this really works it will make a lot of players very happy. Even in the studio it could offer benefits as traditional miking setups don’t always cope well with performers who move around when playing.

Essentially, iRig Acoustic Stage comprises a clip-on omni microphone, around the size of a plectrum, feeding into a battery-powered box housing the preamp and the DSP processor that shapes the sound. A belt clip for the preamp and a carry case are also included. A-D and D-A conversion is quoted as 32-bit with a sampling rate of 48kHz, though this likely relates to the DSP architecture rather than the conversion itself. A Cancel Feedback button helps prevent the feedback problems that afflict many guitar mic systems during live performance, and an aux input with a blend control lets you mix your guitar’s existing pickup system with iRig Acoustic Stage should you wish to. For direct recording iRig Acoustic Stage also includes a class-compliant USB audio output for direct connection to your Mac OS or Windows computer. 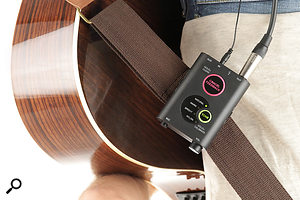 The beltpack houses the preamp, the DSP, and controls for shaping the sound as well as engaging the anti-feedback processing.All the clever stuff goes on inside the DSP box, where the user controls are few in number and largely obvious in function. A Tone button steps through both steel-string and nylon options, offering Bright, Warm and Neutral settings for each; pressing and holding the Tone button calibrates the system to what your guitar is sending to the mic — just strum and noodle for a while, then press the button again when you are done. A slide switch turns on the power and there’s a flush master volume control that pops out when you press it. A smaller mix knob balances the signal with the aux input, and a ‘phase’ switch inverts the polarity of the signal relative to the aux input to avoid phase cancellation issues when combing the sound with an existing pickup. Cancel Feedback gets a big button all to itself, and you can push and hold the button to clear any active filters.

Before evaluating the subjective sound of the system, here are a few facts and figures. The maximum soundboard thickness that can accommodate the mic clip is 4mm, though most acoustic guitars fall into this range. The mic itself is omnidirectional and has a 30Hz-20kHz (±3dB) frequency response. It can cope with sound pressure levels of up to 130dB SPL — and you would have to play extremely vigorously to get anywhere even close to that level. Mono quarter-inch jacks are used for the main output and for the aux input, while the USB port uses a micro-USB connector, and the mic plugs in via a mini-jack. A pair of AA alkaline batteries (included) are required for operation, giving a typical battery life of around 12 hours (or up to 15 hours with rechargeable Ni-MH AA cells of 2000mAh capacity or greater). Long cables can be driven without problem as the output impedance is just 50Ω.

After calibrating the system, my first recording suffered from a few spurious noises which were cured once the mic cable was taped to the guitar body. Overall, the tonality came across as sounding pretty natural, and without the giveaway ‘quacky’ quality I hear from typical piezo bridge systems. If I didn’t know what the recording method was I would have assumed I was hearing an external mic, and the recorded sound needed very little in the way of extra finessing. The three tonal options provide sensibly subtle variations which can be further tweaked using EQ — and a little ambience is useful to add that sense of being miked in a real space. The tonality can also vary slightly according to where around the soundhole you clip the mic, so there’s still a little scope for experimentation.

On turning up the monitor level to provoke deliberate feedback, pressing the big button killed it almost instantly, and in a live context any minor tonal changes imparted by the filters are far more acceptable than howling feedback. I can also confirm that iRig Acoustic Stage works fine as a USB recording interface (input only). As well as being compatible with Mac or Windows, it can also work with iOS and Android devices, though in all cases you’ll need to source your own USB connection cable. My Mac recognised the iRig Acoustic Stage as an available input source and the recorded sound quality left no cause for concern.

In all then it seems the iRig Acoustic Stage does pretty much as claimed, and while a traditional miking setup might be more flexible, the results available from this system are very encouraging, combining good note articulation with tonal depth. For live performance you still have to watch out for feedback, though the feedback killer is a big help in that department. In the home studio the clip-on mic sidesteps room acoustics problems and also reduces (in comparison with a conventional miking setup) the spill from other instruments that may be playing at the same time. Definitely worth a closer look.

The closest alternatives using DSP enhancement are probably the various Fishman Aura products, which offer a range of guitar-type emulations based on convolution using a bridge pickup as the sound source.

The iRig Acoustic Stage can be swapped between guitars quickly and manages to produce a good miked-up sound.