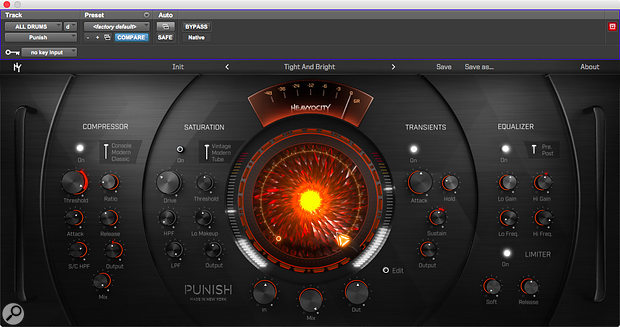 If your audio has been particularly naughty, perhaps Heavyocity can give it the treatment it deserves...

Specialising in the brutal, unnatural and downright scary, New York-based developers Heavyocity have made quite a name for themselves with virtual instruments targeted at the modern media composer. Their latest release is a bit of a departure, not because it isn’t brutal, unnatural or downright scary, but because it’s not a virtual instrument. Punish is a conventional audio processing plug-in, available for Mac OS and Windows in VST, Audio Units and AAX Native formats.

In creating their brutal, unnatural and scary virtual instruments, the Heavyocity team apparently lean heavily on a variety of ‘secret sauce’ analogue devices, and the idea behind Punish is to present the same processing options in modelled form. Said options comprise five individually switchable modules: a compressor, saturator, transient shaper, equaliser and limiter. These are arranged around what looks like the mouth of Hell, but is actually an oversized macro control.

Each of these processing modules offers a pretty well-judged selection of controls, enabling them to be versatile yet not over-complicated. To the expected Threshold, Ratio, make-up gain and time constant controls, for example, the compressor adds three different circuit models, a side-chain high-pass filter, and a Mix control for parallel operation. The saturator also offers three different ‘flavours’ of distortion. Drive and Threshold knobs let you dial in the right amount of filth, and you can also apply a high-pass filter to the input and a low-pass filter to the output, ensuring things don’t get either too flabby or too fizzy.

The transient shaper lets you independently adjust the levels of the ‘attack’ and ‘sustain’ portions of the sound, with an additional Hold control allowing you to set the duration of the former. The EQ is a simple but effective two-band affair, which can be switched either to the front of the signal chain, to tailor the input signal so as to get the greatest benefit from the other processes, or towards the end, so as to fine-tune the contributions of the other modules. The limiter, logically enough, is always the last module in the chain, and there are also global input and output gain and wet/dry mix controls.

The most distinctive feature of Punish, both visually and operationally, is that circular gateway to eternal damnation, aka the eponymous Punish control. This does nothing on its own, but can be linked to as many of the other knobs as you like, allowing them to be adjusted simultaneously. To set up or modify this macro functionality, you hit the Edit button to enter an editing mode where clicking and dragging a control knob does not move it, but draws a white arc stretching around its perimeter from the current setting. This arc represents the range through which the Punish control will move each knob; once you leave Edit mode again, these arcs remain visible, but in red. A nice touch is that if you draw a control’s arc clockwise from the current setting rather than anti-clockwise, the Punish knob will move that control in reverse.

This is all nicely implemented, though it’s fair to point out that the user interface has some negative aspects too. For no obvious reason, the Punish GUI opens much more slowly on my Mac than any other plug-in I can think of, taking a full five seconds to appear each time I click on the relevant insert slot in Pro Tools 12. And although the window itself is relatively large, the controls and legending are too small and too dark to be easily legible. More contrast and larger knobs would make a big difference. (Help, I’m starting to sound like Paul White.)

In truth, the concept behind Punish is not exactly ground-breaking. The world is not short of distortion plug-ins, and although there probably aren’t any others that offer the exact same balance of features, the chances are most SOS readers wanting brutal, unnatural and scary are already richly supplied with options. That being the case, Punish is going to need to do what it does pretty well in order to elbow its way into our crowded plug-in folders — and I’m pleased to report that it meets this challenge.

The processing options provided complement one another pretty well — for instance, if heavy distortion is robbing the note attack from your bass sound or the snap from your drums, you can enable the transient shaper to restore some life — and, more importantly, they sound good in their own right. I was particularly taken with the Tube algorithm in the saturator, which delivers a wealth of rich, loose-sounding growling and flubbing effects.

As with so many successful plug-ins, however, the key thing that makes Punish worthwhile is not that you can get good sounds with it, but that you can get good sounds with it easily and quickly. This is down to three factors. One is the aforementioned balance of versatility against complexity, which I think Heavyocity have got just right: Punish covers a lot more ground than something like SoundToys’ Decapitator, but is much more straightforward to use than, say, FabFilter’s Saturn. The second factor is a compact but well thought-out arsenal of presets, which cover a lot of ground without drowning the user in hundreds of options. The third is that Punish knob, which makes getting from ‘nearly right’ to ‘just right’ painless in many cases. There are certainly cheaper saturation plug-ins on the market, and ones that don’t strain the eyes quite as much, but all in all, Punish is a class offering.

Heavyocity’s cleverly crafted plug-in is ready to deal out all sorts of audio chastisement, from gentle scolding to extreme torture!