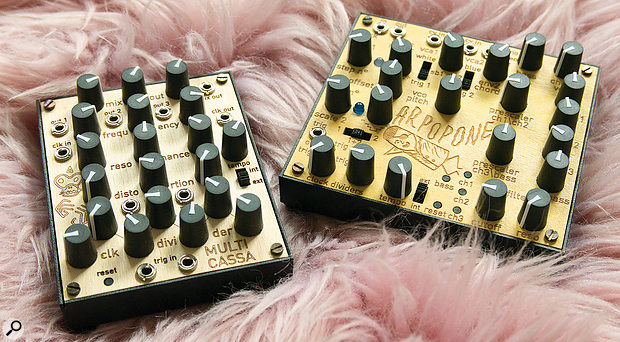 The good folks at Laboratorio Elettronico Popolare are back with two new instruments to confound and delight.

Wooden panels etched with doodles, manuals that look more like punk-album lyrics-sheets... these hand-made instruments are evidently not going to tread the middle-ground. Designed in Italy, they’re made from the same mould, sharing some internal design features, but their focus is quite different. The Multicassa is a three-voice drum machine and the Arpopone is a sequenced bass and chord synthesizer. They are available as both stand-alone instruments, housed in study metal enclosures, or as Eurorack modules. For this review we are looking at the stand-alone versions.

Clearly, the two have been designed to play together. Clocks and ramp dividers play a key role in both instruments, and clock inputs and outputs means that either one can be master or slave thanks to internal or external clock switches. Build quality is good, although I notice that the rubber of the knob caps seem to rub on the wooden panel surface so the knobs don’t always feel smooth. The cases are very solid, however, and powered by a 12V adapter with positive centre tip. The Arpopone case comes with two PSU inputs, one which can be used to daisy-chain power to another unit like the Multicassa, providing you have a suitable cable, which is not included.

The Multicassa is undoubtedly the simpler of the two, so we’ll start there. A Cassa can produce all manner of excellent analogue drums using a short pitched pulse, feedback and distortion. The three voices are identical, other than their tuning ranges. There is a low, mid and high Cassa. The first is excellent at kick drums. The other two can manage everything from toms, wooden blocks, claves and metallic hi-hats. Or, if you prefer, howling feedback drones. Each has its own dedicated output and mix control, as well as being routed to the mix output. 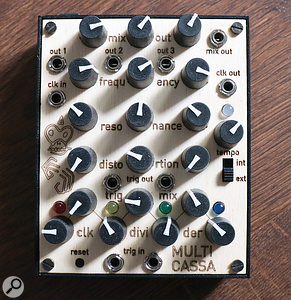 LEP Multicassa.The three tonal controls don’t always behave as you might expect. At some settings the Distortion control seems to do nothing, and sometimes Frequency affects the timbre more than the pitch. The Feedback control can go from timid wallflower to wild banshee in a millimetre, and will sometimes spiral into self-oscillation when turning a completely different knob. In short, these are not predictable drum synths, but chaotic analogue circuits. The overall tone is very pleasing, however. The sound puts me in mind of vintage drum machines, perhaps a Roland CR-78 which has spent too long in the garage or a Korg Mini Pops with circuit corrosion.

Whilst it is true to say that it’s a sequenced rhythm machine, don’t expect anything like a conventional groove-box. The primary sequencing method is via a series of four clock dividers, which all run at some division of the main internal or external clock. Each clock divider has a coloured LED to show you its trigger pattern. The three drum voices can be triggered by combining two adjacent clock dividers in various amounts. So drum voice 1 is triggered by a mix of dividers 1 & 2, drum voice 2 by dividers 2 & 3, drum voice 3 by dividers 3 & 4. This creates euclidean–sounding rhythms and is, I think, a very clever design. Not only does crossfading between two clock dividers alter the rhythmic pattern, but it varies the amplitude of the pulses from either side which acts like velocity and affects the tone of the drum voice. In this way you can create accents within each rhythm part.

If you want friends to join the trigger party, there are a couple of trigger outputs, although they only output the 2 & 3 and 3 & 4 mixes, not 1 & 2, which seems like a curious omission. There are also two trigger inputs, which trigger not the voices directly, but dividers 2 & 3. This means, with careful setup, that you can trigger all three drum voices using two inputs. On reflection I would have preferred three direct trigger inputs to the voices though. Finally, a reset button allows for resetting each of the clock dividers, presumably if they somehow become out of sync.

These are instruments for the bold electronic explorer who is happy to roam the left-field.

The Arpopone is a dual-voice, sequenced bass and chord synthesizer. I guarantee you, though, that whatever you are imagining right now, is not it. The front panel etching, of a knob wearing an overcoat, an eye-patch and a smile, might just give you a clue as to the kooky nature of this instrument (the manuals for both instruments are a feast of hand-drawn illustrations by the same artist).

Like the Multicassa, it’s all made possible with a network of ramp dividers. There are 10 in total. They form not only the sequencing, but also the sound generation. Trying to explain the exact configuration may perplex anyone without an electronics degree, but I’ll attempt an abridged version (I don’t have an electronics degree, incidentally, and, yes, I spent a fair amount of time in bewilderment). A couple of ramp dividers provide trigger pulses for the bass and chord section. Another two make scale generators, which transpose the audio. Four more make up the audio dividers which tune the three chord notes and the bass note, and finally there are another two which further transpose the audio. In theory it all makes sense, but in practice the ramp dividers all interact with each other in multiple ways. Just when I thought I’d understood it, the Arpopone gleefully proved me wrong. 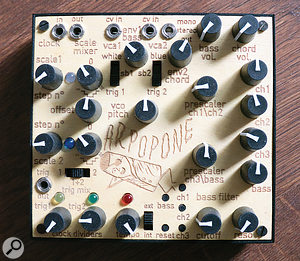 LEP Arpopone.Firstly, and very importantly, do not expect to create pretty melodies quantised to any known scale in this universe. This is an all-analogue device and even though the manual gives examples in western tempered scales, it’ll never happen. There is a master tuning control which tunes the entire instrument, but once the internal sequencing starts, all bets are off — embrace the chaos. The manual suggests resetting all controls to the mid position before attempting any kind of patch. This, it turns out, is sage advice. Simply diving in and trying to figure things out as you go is an exercise in frustration.

With all controls reset, you might start by switching the clock source to internal and setting a tempo. This will kick off the two trigger sequencers. Bass and chord notes will emerge. Two Envelope controls will adjust the amplitude decay of the bass and chord sounds. A pair of three-way switches allows the envelopes to be triggered in different ways and there are two CV inputs if you wish to control amplitude from an external source.

After this you might head to the note–tuning section on the right. Four knobs allow you to tune the bass note, and the three chord intervals. A handy set of micro buttons will trigger the bass and three chord notes separately to assist you. A further two knobs, labelled ‘prescalers’, will pre-tune the voices in pairs. So one for chord voice 1 & 2, and one for chord voice 3 and the bass.

Whilst you are tuning, and I use the word ‘tuning’ in a very loose sense, you might also investigate the bass voice’s Cutoff and Resonance controls. Once again, put your preconceptions aside, these don’t work like any normal filter. At low resonance settings, the Cutoff control acted more like a Tone control and at high resonance settings it retunes the Bass voice with a howling feedback sound.

Finally, it’s over to the Scale section where two ramp dividers form stepped ramp shapes which are combined and used to transpose both the bass and chord sounds. You can adjust how many steps each ramp will have, from one to 40, and the amplitude of the ramp signal, ie. how much it transposes. There’s an offset control which allows you to raise or lower the overall transposition.

The Arpopone, more than any other instrument I’ve encountered, cannot be explained easily by describing its innards. The included manual is absolutely necessary. I had to read it several times. Because the entire instrument is built with ramp dividers, which are all in some way connected, patches can often feel like a house of cards, with one twist of a knob having unexpected consequences. Controls with conventional labels such as Cutoff or Scale don’t always do what you’d expect. This can be frustrating, but in the disarray a strange kind of beauty emerges. It is never predictable, and it is often preceded by nauseous bedlam. The sound of the Arpopone is raw. Remember, there are no oscillators here, only ramp dividers whose audio-rate output sounds like a sawtooth waveform after being kicked out of a nightclub by an overzealous bouncer. The focus is really not on sound design.

As a pair, the Multicassa and the Arpopone put me in mind of two disobedient teenagers. You can ask them to run an errand, but they may take your money and spend it on top-shelf magazines and a four-pack of lager. On the other hand, they have a charm and wit which you simply wouldn’t get on a more refined, grown-up instrument. The Multicassa is probably the more functional of the two. It does what it purports to do and the resulting analogue drums are rather good. The Arpopone is entirely more experimental and can feel at times like a high-school electronics project. On occasion both instruments hiccup. They will sometimes trigger a note entirely on their own, or the sequencer won’t start when switched to internal, requiring a deft flick of the switch to re-engage.

As stand-alone instruments, the Multicassa and the Arpopone can feel a tad naked. I have a feeling that they would benefit from the help of other modules. The Arpopone could buddy-up with a proper filter, for example, and the Multicassa came alive when introduced to a touch of analogue delay. As such, I think I would have preferred them as Eurorack modules. It’s nice to have the choice, however.

You certainly wouldn’t buy these pair as your first drum machine or synthesizer. These are instruments for the bold electronic explorer who is happy to roam the left-field. The Arpopone manual has a large picture of a group of drunken knob-caps, partying aboard a float, upon a black sea, and I think that sums it up better than I ever could.

Having an ‘alternatives’ box for this pair feels somewhat irrelevant. I can’t find any instruments that are so reliant on ramp dividers in their design or even anything vaguely comparable. However, if you enjoy the drum sounds of the Multicassa, it is worth investigating its bigger brother, the LepLoop, reviewed in SOS September 2016 by Paul Nagle.

In using analogue ramp dividers as tone generators, LEP were inspired by the work of a German electronic music pioneer called Oskar Sala. In 1948, Sala invented the Mixtur-Trautonium. Although it used gas-filled tubes instead of solid-state circuits, it was one of the first electronic instruments that could achieve subharmonics by dividing down the main oscillator, which is the primary function of the ramp dividers in Multicassa and Arpopone. Bonus trivia: Oskar Sala composed music for films, and is perhaps most famous for making the sound of the birds in Alfred Hitchcock’s The Birds.

A pair of utterly unique, sometimes baffling, occasionally brilliant instruments which, whilst definitely not mainstream, have some charm amongst the rough edges.