There's more to these speakers than meets the eye, thanks to some cunning DSP and unique networking capability. 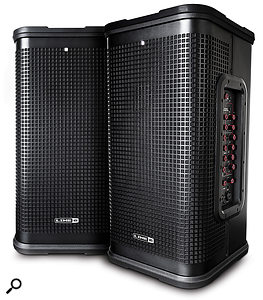 It has been around 18 months since Line 6 first previewed their StageSource range of PA speakers. These are unusual in having many built-in 'intelligent' features, most notably the L6 Link proprietary digital networking protocol. When connected via this network, the loudspeakers automatically configure themselves in the appropriate relationship to any other speakers (including subs) that are on the same network. The on-board digital processors then handle the panning of stereo signals if more than one speaker is being used, and if an L3S subwoofer is part of the system, it is fed the necessary mono mix, while crossovers are configured to send the suitably high-pass-filtered stereo signal to the tops. The same network protocol also allows the speakers to integrate with the Line 6 StageScape M20D digital mixer, which we reviewed last year (/sos/nov12/articles/line-6-m20d.htm). Up to nine speaker cabinets can share the same network, but even when you're using these speakers as part of a non-networked 'normal' system, there's still a lot of useful processing power available.

Starting with the basics, the L2T reviewed here is a bi-amped, two-way speaker system, built into a rugged plywood enclosure and finished in textured black paint. A robust steel grille protects the speakers, and the cabinet is fitted with M10 suspension points, plus a 38mm pole mount socket. The corners are generously rounded, while the top and bottom caps include rubbery feet and a recessed centre section with a lip that can be used as a carry handle. There's also a large swing-out handle on the side of the speaker, and pop-out legs on the rear panel support the cabinet at an angle for monitor use, at either 30 or 60 degrees. My first impression was that some serious thought had gone into the industrial design of these cabinets. At 17.7kg each, they can also be comfortably carried single-handed.

Inside the box are two bespoke 10-inch bass/mid drivers, powered by two-inch voice coils and teamed with a one-inch HF compression driver. The latter feeds a horn giving a 100-degree horizontal x 50-degree vertical coverage pattern. Class-D amplifiers (totalling in excess of 800W) are used to minimise weight, while the mixing and processing is done using DSP technology. 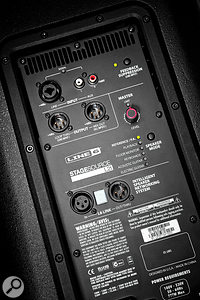 The StageSource L2T has six different speaker modes, selected by pushing the button on the right-hand side of the rear panel.

The cabinet has on its side a mixer control panel for stand-alone use, and when two speakers are networked, both mixers can be used at the same time to feed both speakers in stereo. Provision of a pole sensor and an internal accelerometer means the speaker 'knows' when it is set up on its side and automatically switches to monitor mode. What's more, if the speaker recognises that it is set up vertically but not on a pole, it assumes it is on the floor and so steers the sound upwards slightly towards the listener. Additional functionality includes intelligent 12-band feedback suppression, multiple speaker modes, a limiter and built-in effects.

The speaker modes comprise specialist voicings for 'normal' PA; music playback, with a mid scoop; floor monitor, with reduced bass; keyboards (flat response with a 3.5kHz crossover); acoustic guitar (tailored lows with a 3.5kHz crossover) and electric guitar — a 2x12-inch guitar cab emulation. A single button steps through the speaker modes, with LEDs denoting the current selection, and there is an LED above the master level control to monitor the internal limiter operation. Feedback suppression for the line input may also be engaged here.

When in PA speaker mode, the L2T's frequency response is given as 44Hz to 19kHz at the -10dB points, or 51Hz to 18kHz ±3dB, so the speakers are capable of close to full-range music reproduction without a sub. A maximum SPL of 128dB (unweighted) is quoted at one metre for music played indoors. Depending on the speaker mode selected, the crossover automatically sets itself between 2.2kHz and 7.0kHz. A digitally controlled cooling fan comes on when needed, and the circuitry includes output over-current, over-temperature and DC fault protection.

On the rear panel is a line-level XLR/quarter-inch jack combi connector, and a stereo pair of RCA phono inputs. Two male XLRs provide balanced Thru and Mix audio outputs, while a further pair of XLRs is used for the L6 Link In and Thru.

Moving to the two-channel mixer on the recessed side panel, the input gain knob can be adjusted up to +57dB, while a switchable pad means that input levels of up to +25dB can be accommodated, so the same input can be used for mics or line-level sources. There's no phantom power for capacitor mics or other active sources, though. EQ can be adjusted per channel, with rotary controls for LF Level, MF Freq and Level and HF Level.

For the internal effects there is adjustment over mod level and reverb level, again separately per channel, with independent feedback suppression switches for the two channels. This means that if one of the channels is a DI source, you can switch off the feedback suppression to avoid the filters affecting the tonality in any way. The effects are basically presets so the only user control is to dial in more or less of them, but they are well-chosen and musically useful. The chorus rate and depth seems to track the amount control, so you always get a sensible combination of the two. The mixer can be set to either dual-mono or stereo stereo operation, actioned via a slide switch. In stereo mode, channel 2's controls affect both channels.

A further knob, labelled Acoustic Modelling Amount, is present on channel 1. This adds a modelled guitar body resonance to a DI'd acoustic guitar. It's clear that this speaker is designed to be guitarist-friendly, and it comes as no surprise that Line 6 also recommend their L2 speakers as being ideal for use with their Pod amp simulators.

A two-input mixer on the side of the L2T can accommodate mic, line or instrument signals, and provides EQ and effects on both channels.

To get a pair of speakers working using the L6 Link, it is necessary to connect two XLR cables so that the Link In socket of each speaker is connected to the Link Out/Thru socket of the other. In most cases a conventional mic cable will work, but for the most reliable operation you should use AES3 110Ω cables, especially for long cable runs. Connecting two speakers allows both of their mixer panels to be used: the left channels of both mixers are routed to the left speaker and the right-hand channels to the right speaker. However, there seems to be no way to get one signal routed to feed both speakers at the same time. A display panel next to the L6 Link connectors shows 'L' or 'R' to denote which speaker is left and which is right. In other configurations these displays also denote L+R mono operation. Note that the speaker mode still has to be selected independently for each of the two speakers, even when they linked. Alternatively, of course, you can just use them as conventional PA speakers feeding each with an analogue signal from a separate mixer.

My first observation was that, unlike many plastic box systems, you don't get that 'resonating Tupperware' sound when you stand behind the cabinets. A sense of clarity is evident, and though not quite hi-fi, there's a much better sense of integrity here than you get from many smaller PA cabinets, where the mids are often compromised for the sake of maximum SPL. Using the on-board mixer with a microphone, the results were clear and predictable. The reverb added the necessary degree of ambience, and there's enough EQ range to fine-tune the sound — though given the option I'd have liked to see a conventional low-cut switch included to help tame popping. Engaging the anti-feedback function brings in a bank of seek-and-destroy narrow notch filters in the usual way, but the feedback has to build up to an unpleasant level before these kick in, so this is best set up during soundcheck.

Switching to a DI'd acoustic guitar with a piezo pickup, that modelling control can be used to add a little authentic-sounding body resonance, but it is easy to go too far and get a boomy result, so this should be used with care. Again, the reverb helps create a sense of space, while the chorus is both subtle and fluid, reminding me rather of a popular Boss pedal.

The electric guitar setting is interesting, as the horn still makes a very small contribution, but the overall response is akin to that of a 2x12 cabinet complete with an high-frequency roll-off designed to match a typical guitar speaker. Plugging a guitar directly into the mixer gives a very usable clean sound, while going via an overdrive pedal produces an amp-like sound with no excess fizz — though I wouldn't recommend this approach for rock playing, as you don't get the tonal coloration or power compression of a typical guitar amp. It would get you through in the event of an equipment failure though, and so makes a good backup option, but if you really want to get a convincing electric guitar sound out of this speaker the best approach is to plug-in a modelling device such as a Line 6 Pod. Better still, plug into a pair of speakers and have your Pod in glorious stereo! You have a choice of using the speaker emulation in the Pod with the speaker's PA voicing, or turning off the speaker emulator in the Pod and using the speaker's electric guitar voicing. I tried both options and though they sounded a little different, I found that I could create a satisfying guitar sound either way.

Despite their sophistication, the StageSource L2T speakers cost no more than many competing plastic-box designs. Having two 10-inch drivers rather than a single 12-inch driver seems to helps knit the mid-range together in a more cohesive way, and also helps control the dispersion. The column construction makes these speakers very rigid, which minimises the amount of resonance as well as unwelcome sound leaking out from the back of the case, and vocals come over clearly with good articulation. Those extra voicing modes also make the StageSource L2T suitable for many backline applications, as well as being a perfectly viable and sensibly priced substitute for a dedicated acoustic guitar and vocal combo. This degree of versatility makes them particularly attractive if you need a scalable PA system — for a coffee-shop gig one day and a large nightclub the next, say, where the same speakers can double as PA, monitors or backline. Whether you need the Line 6 Link or not, the StageSource L2T speakers deliver the goods in a variety of situations — and that's their real strength.

What alternatives are available depends on what additional features you need. Nobody else has Line 6 Link, for example, but Mackie's DL Series speakers do have built-in mixers. If you don't need a built-in mixer then there's a huge range of similarly priced powered PA speakers, both wood and plastic, to choose from.

The StageSource L2T speakers are flexible, affordable, and they sound good. What's not to like?

£729 per speaker including VAT.