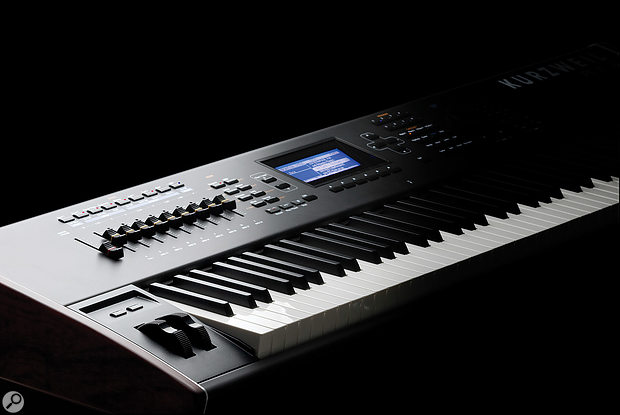 There's something rather odd about Kurzweils. For one thing, they're far from ground-breaking. The VAST (Variable Architecture Synthesis Technology) engine that generates their initial sounds was unveiled in 1990 and, despite advances in each of the subsequent generations, it's clearly the same underlying system. Secondly, they're far from ground-breaking. For example, despite being described by Kurzweil as of "ample size” and enabling you to "view lots of information at one time”, the monochrome, non-touch-sensitive screen on the latest model offers a resolution of just 240 x 64 pixels, which was anachronistic before the end of the last millennium. And, let's face it, the 64MB ROMs, 64MB expansions and 128MB sample memories in the latest models hardly compete with the gigabytes offered elsewhere. So why do people like Kurzweils so much? The answer is, as always, their sound. Over the years, they have garnered a reputation for sounding bigger, warmer, and altogether more cuddly than other synths. There are times when a Kurzweil simply sounds nicer than the alternatives.

The company's latest workstation, the PC3K8, is not much different from the PC3X that I reviewed in Performing Musician magazine in October 2008 (which can be read at www.performing-musician.com/pm/oct08/articles/kurzweilpc3x.htm).They share the same keybeds, the same screens, the same 128‐voice polyphony and 16-part multitimbrality, the same effects structures, the same sequencer, the same real-time controllers and the same (somewhat limited) audio I/O. Both include Kurzweil's highly regarded Contemporary and Orchestral sound blocks, and both offer the popular Stereo Triple Strike Piano, Classic Keys, and String Sections. They can even host the same Kore64 ROM expansion board, and you can program both using the same SoundTower editor. In fact, there are just three differences. The first is the inclusion of 128MB of sample memory in the PC3K series. This is better news than it seems, because the memory is flash RAM, meaning that samples are retained when you switch the instrument off and are immediately available when you switch it on again. The second is the change from using XD cards to using USB sticks for external memory. The third is a more efficient method of saving User Objects (things such as keymaps, programs, setups, arpeggiator patterns, samples and effects chains), so the maximum number has increased from 2560 to 16,000.

Let's be clear: the K8 is not a sampler. But saying that it offers sample playback doesn't tell the whole story. The key here is the letter 'K' in the name, which is intended to convey that the K8 and its siblings are (largely) compatible with the sample libraries and programs for the K2xxx series. To test this, I dug out a USB floppy drive that I bought many moons ago and loaded dozens of disks, including my K2000 Analog Collection, onto my Mac. I then copied the files to a USB memory stick and loaded them into the K8. My first attempt was not entirely successful; some sounds reported 'Object Not Found' and remained stubbornly silent. (This may have been because the programs I selected were based on the obsolete K2xxxx 'triple mode', or because they required me to download and install a ROM compatibility file.) Happily, other disks loaded all of their samples and programs successfully and, as on the K-series workstations for which I obtained them, many of them sounded gorgeous. However, they didn't sound quite the same. The KSP8–derived effects generators in the K8 are incompatible with the more basic effects in the earlier models, so the K8 substitutes appropriate alternatives.

The K8 is also able to load 8- and 16-bit AIFF and WAV files with sample rates of up to 96kHz. To test this, I sang a few seconds of "aaahhh” into my Mac's internal mic, then connected the computer to the K8 and transferred the AIFF sample. I mapped and trimmed it in the Kurzweil's sample editor, inserted the result into a Keymap, turned this into a Layer, added a filter, duplicated the Layer a few times and detuned each, added a bucketful of reverb, and played. In defiance of the low quality of the initial recording, it sounded wonderful. Except for the singing, obviously.

No synthesizer is perfect, and the K8 is no exception. Despite the undeniable quality of its PCM-based sounds, I can't call myself a fan of the KB3 organ, and for me there are much better systems out there. On a more positive note, I generally like patches based upon the KVA (physically modelled) oscillators, although I'm not sure that Kurzweil should be calling them 'virtual analogue' because the rest of the architecture is the same as used for the sample-based sounds. Elsewhere, there are limitations in the storage mechanism. If you're using the USB port for backing up or archiving (as well as for loading samples and files), be aware that the K8 can't deliver a current of greater than 100mA, which may preclude the use of some elderly or large devices. Unfortunately, there's also a 1.6GB limit to the size of files transferred directly from computers, so there's a possible Catch 22 here.

But perhaps its biggest limitation (commercially, not technically) is that it's so different from other manufacturers' instruments. Knowing how to program (for example) a Fantom or a Kronos is no guarantee that VAST — with its quasi-modular architecture and cascaded 32-layer programs — will make sense. I have seen it claimed that, at its inception, VAST's developers just kept adding facilities that they deemed might be interesting. Since then, the company has added the KB3 organ emulation and its VA1-derived technology, as well as the hugely complex insert/auxiliary/master effects structure. The result is enormously flexible, but the absence of a graphic display can render editing more than a little daunting, especially for inexperienced users. The free PC/Mac editor helps, although you still need to understand the underlying system to get the best from it. But let's keep all of this in context: The PC3K8 is a superb performance instrument and, with all manner of workstation facilities — multiple arpeggiators, a powerful sequencer, riffs, and more — it's a sound-designer's dream. Furthermore, the review unit proved to be bug-free throughout the test period, which is always a pleasure to report.

Despite being based on samples that are getting rather long in the tooth, the latest version of VAST is synthesis on steroids, and I doubt that anyone has ever claimed to have plumbed its depths to the point where there is nothing left to extract from it. While the PC3K8 doesn't cover the same breadth of ground as the best of the rest, it's nonetheless a very attractive proposition for both the studio and the stage. The lack of sampling (as opposed to sample playback) means that it's not a direct replacement for a K-series workstation, but I suspect that there could be times when the PC3K8 will simply be the nicest tool for the job.

Getting Started With VAST

By necessity, this review has assumed that you are acquainted with VAST synthesis and the earlier Kurzweil PC3 series. If you are not, you can download comprehensive manuals from Kurzweil's web site, and these will provide you with bedtime reading for many weeks to come. There's a lot to learn, but a series of video tutorials on the same site may also go some way to introducing you to the concepts and operation of these powerful workstations.

As an owner of a fully expanded K25000S, I found the original PC3X to be impressive and frustrating in almost equal measure. By changing to a modern storage medium and (most importantly) by adding sample playback, Kurzweil have swept away many of my reservations, and I now like the PC3K8 a lot. Unfortunately, there's still no provision for sampling. Sample playback, yes. Sampling, no. This means that it still isn't a like-for-like replacement for a fully-specified K2500 or K2600.