The new Microtrack packs a high-quality 24-bit/96kHz two-track recorder, complete with USB connectivity, into a box not much larger than a mobile phone.

Despite being not much larger than a mobile phone and weighing in at just under 150g, the new Microtrack 24/96 is anything but light on features. Audio connections include a stereo mini-jack mic socket, two quarter-inch TRS mic/line inputs, and a coaxial S/PDIF input. There is phantom power available on the quarter-inch sockets and 5V power on the eighth-inch socket to feed a bundled stereo 'T' mic. On the output side, there are unbalanced phono sockets and a headphone mini-jack. 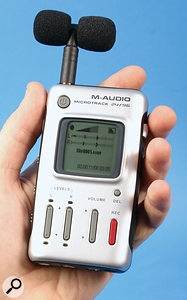 The Microtrack 24/96 can record stereo WAV files at 16-bit or 24-bit resolution (and 44.1kHz, 48kHz, 88.2kHz, or 96kHz sample rates), or MP3 files at 96-320kbps, and these recordings are stored onto a removable Compact Flash card inside the casing. Power comes from an included power supply or from an internal long-life lithium-ion battery, and the specifications state recording times of approximately four to five hours on a single charge, reducing to about three hours when phantom power is engaged. You can charge the battery either via the power supply or by connecting the Microtrack 24/96 to a PC or Mac via USB. M-Audio have obviously taken note of Roger Thomas's Sounding Off column back in SOS December 2005, as the Microtrack also comes with a nice black bag with a drawstring!

There is one thing you should definitely do before anything else with the Microtrack 24/96 — go straight to the M-Audio web site and download the latest firmware update. With the original version of the firmware there were some bugs and feature limitations, but M-Audio have been doing a great job of resolving these. Updating is quite simple and is completed in a matter of seconds. You will also want to charge the unit fully to extend the battery life, probably using the supplied PSU. This is of the ubiquitous wall-wart variety with two pins, although sliding the unit apart exposes a figure-of-eight socket which allows you to connect a suitable UK mains lead.

The supplied 64MB Compact Flash card was already formatted on my unit, but if you purchase another, larger card (pretty essential if you want to do any serious amount of high-quality recording) you will need to format this — again a pretty simple job. Note that not all Compact Flash cards are compatible with the Microtrack, and the M-Audio web site has a list of approved ones.

The Microtrack 24/96 is nothing if not versatile: during the review period I made two different location recordings with it, used it as a sketch pad for song-writing, transferred non-audio files from a PC to a Mac, took it on the train as an MP3 player, and even made the tea with it. (Ok, so I lied about the tea.) However, despite its flexibility of use, I was struck from the outset by how easy it was to use. 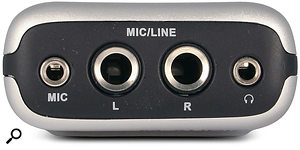 Once you have booted the machine, you simply select which input you wish to use and which file type, press Record, set your recording levels, and start recording. It's worth noting that pressing the Record button actually starts the machine rolling, so if you want to pause whilst you set levels, you will need to press the little scroll wheel on the right-hand side of the machine, pressing it again to take you out of pause mode. One of the joys of this unit is that you can press record at any time, no matter where you are in the operating system's menu structure, making it a very quick process to start recording. In addition, I could boot up the Microtrack 24/96, plug in the included mic, set a level, and be recording within 40 seconds — doing the same with Cubase, including setting up a mic and stand, took nearly one minute and 45 seconds. This could be the difference between catching the inspiration for that number-one single, or losing it.

The Microtrack gives each file/recording a sequential number, and at present there is no way to name these, or indeed to reset the numbers, without doing a default reset of the unit. A pen and paper are most useful for keeping track of your recordings. Who can remember in a month's time whether file 0094 was really the best take? Once you have recorded, you can either listen back via the unit or transfer files to a computer. In the latter case, if you connect the Microtrack 24/96 up to a computer via the USB 2 cable, the recorder's Compact Flash card appears on the computer's desktop as an external drive, and files can be transferred quickly to your hard drive.

Listening back to recordings direct from the Microtrack's headphone jack was hampered because the fast-forward, rewind, and scrub facilities were a little erratic. The unit would scrub forward for maybe 10 seconds and then the display would freeze and it would take a few seconds to work out where it was. Several attempts on the same file resulted in arrival at a number of different places! Sometimes it would be further into the track as expected, at other times it would be in the next track or possibly back at the beginning of the selected track. This proved quite annoying when scrubbing through long tracks — finding a moment 20 minutes in, for example, proved almost impossible. In each case I ended up transferring the files to my PC and auditioning them there. This is definitely something M-Audio need to resolve. 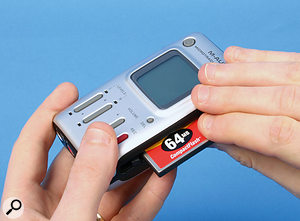 The Microtrack 24/96 records direct to a Compact Flash card installed via a slot in its side.I was initially somewhat disappointed with the preamps on the Microtrack, as they were a little noisy for my liking. The mini-jack socket and included mic were particular culprits. However, for instant capture of ideas and for documentary purposes I don't see this as a problem. The balanced preamps are better (but still not as quiet as those of my M-Audio 1814, for example), although I don't feel that super-quiet preamps can be expected for a product at this UK price. I recorded a solo piano recital with a stereo mic pair, and found the resulting file needed a little noise reduction to make it usable. However, a pair of Rode NT5s and 27 players from the London Philharmonic orchestra (with a much larger sound than a solo piano!) proved a very nice combination. The detail was good and I was set up in about a quarter of the time it normally takes me to set up my laptop and interface. I also felt confident that I could just leave the Microtrack to get on with it's job whilst I worried about the front-of-house sound — not something I can always confidently do with my laptop.

Whilst on the subject of connecting microphones, it's worth mentioning that, although the unit can indeed provide phantom power, it does so at 30V rather than the usual 48V, and this may preclude the use of certain microphones. M-Audio's web site provides a list of microphones which will work with this lower supply, although this is certainly not exhaustive. For example, neither the Rode NT4 nor the Rode NT5 are included, but the NT5s certainly make an excellent partner for this device — I would imagine the NT4 would also. However, it is fairly easy to find out the phantom-power needs of a mic from the manufacturer or from www.microphone-data.com.

I feel that Compact Flash recorders will become more and more popular as time goes on — already the BBC are using them to record the Proms! Although the cards are a little pricey at the moment (a 2GB card offering 3.5 hours of stereo 16-bit/44.1kHz will cost about £80-100 at the moment), prices are dropping all the time and I imagine cards with sizes comparable to hard drives will be available in the not-too-distant future.

I've tried the Microtrack in a number of different roles, and found it incredibly easy to use and simple to set up. If I were looking to do more critical classical recording with it, I'd probably pair the unit up with an Apogee Mini-Me (or similar mobile preamp) via an S/PDIF cable, and still have a stereo setup that's smaller and less hassle than my laptop. Although I haven't made many ventures into the 96kHz arena yet, having the facility to do so is a real plus point for me. The ability to use the unit as a memory stick for non-audio file transfer is also very handy, and it makes an excellent backup device as part of a location recording setup. As I mentioned earlier, I shall certainly be turning to the Microtrack 24/96 to capture inspiration when writing, as it is much quicker to set up than either my desktop or laptop computers in this respect. It reminds me of the good old days with a Dictaphone!

I do feel that there is room for development with the unit. I would like to see a little more detailed metering, with figures rather than just lines. Limiters on the inputs would also be quite useful. The ability to name files might make life easier, but might also make the unit more complicated to operate. At present you can't monitor the S/PDIF input, which might be a bit of a problem if you are using external preamps. Although you can often monitor from such units directly, I prefer to do it via the recording device, as you never know for certain that signals are getting to it correctly. 'Well, it sounded alright at the preamps' might not wash on a professional session! M-Audio have informed me that they are looking into a solution to this problem, and in the short time I've been using this unit they have been beavering away updating the firmware, including new features and improving the way the unit works. Who knows, they might eventually include the tea-making facility!

At this UK price, it's hard to find anything with exactly the same features, and if you are looking for a small, convenient recorder that does any or all of the jobs above I would thoroughly recommend the Microtrack 24/96.

Despite a few teething troubles, this is an extremely versatile and portable little stereo recorder which is very easy to use and can deliver professional results.