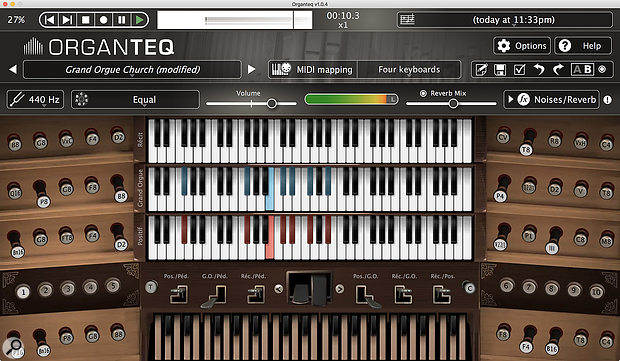 Does Modartt's Organteq do for the pipe organ what Pianoteq did for the piano?

Recreating the sound of a pipe organ is not easy. In fact, it's bloody difficult. Nonetheless, emulations have improved considerably over recent years although the best of these — whether delivered as huge sample libraries or as physical modelling in traditional console organs — are not cheap. But now Modartt have released Organteq, a physically modelled software instrument that aims to do for pipe organs what Pianoteq has been doing for pianos for the past few years.

Supplied as both a plug‑in and as a stand-alone application, Organteq offers a single organ model, presenting you with three five-octave manuals (Positif, Grand Orgue and Récit) plus a 32-note pedalboard (Pédale). Each of these has 10 stops controlling ranks that include principals, flutes, stopped flutes, strings, chimneys, reeds (including a Vox Humana), and mixtures incorporating either three or five ranks with breaks. Pipe lengths range in octaves from 16' to 1' with a flute Quinte and a Bourdon (stopped flute) Nasard at 2-2/3', and you can edit each of the ranks by adjusting the loudness and the fine-tuning of each pipe within it. You can also determine a stop's overall volume and its response to the crescendo pedal. In a novel move Organteq allows you to assign ranks to stops, which makes it possible to duplicate a given rank on a given manual. With subtle detuning this can create some nice 'celeste' voicings. Done less subtly, it takes Organteq to places that no traditional pipe organ ever visited unless the organ builder was deaf, drunk or both. Six couplers are also provided, and you can edit these with control over source, destination, ±1 octave transposition and 'forwarding' (cascading).

There are two control pedals. The one on the left ('expression') controls virtual louvers that Modartt call blinds. On a pipe organ the louvers are physical barriers that can be opened for a louder, brighter sound or closed for a quieter, duller one. Here, you can choose which ranks lie inside and outside of the blinds. The pedal on the right ('crescendo') introduces new stops into the mix when depressed, and the choice of stops and where in the travel they are actuated is determined by the programming within the stop itself.

In addition to Tutti (all stops drawn) and Cancel (all stops pushed in), 10 Combinations are provided and, for each of these, you can determine whether a stop is Set (drawn), Unset (pushed in), or unchanged when you select a given Combination. You can therefore set up the Combinations as divisional (affecting a given manual or pedals) or scoped (affecting anything in the instrument) as you choose. You can step forward and backward through the Combinations using two dedicated buttons, much as you might use a set list on a synth.

A Noises panel allows you to determine the amount of noise heard when pressing keys, moving stops, selecting couplers and so on. Being old-school, I rather like this. When you sit at the console of a large organ, you're always aware of these noises, although they're much less apparent to listeners at a distance. The noise volume control allows you to set the noise level to create the sense of distance you prefer. A second panel allows you to program the reverberation, with control over the pre-delay and duration, the room size, the damping, the tone and the mix. It's not the most sophisticated reverb in the world, but it does a good job. If you need something more sophisticated such as a convolution reverb, there's nothing stopping you using a plug‑in or external hardware. Other facilities include global tuning, a choice of eight temperaments and the ability to create your own tuning maps.

Once programmed, you can store everything as a memory, either by overwriting an existing one or by creating new registrations within user-definable banks. Furthermore, each memory holds two 'presets', and you can switch between these using the A and B buttons in the upper right of the GUI.

Organteq will work with a single MIDI keyboard or a full console using different MIDI channels for each of the manuals and the pedals, or anything between, and almost everything in the GUI can be controlled via MIDI using user-defined mapping for the stops, pedals and controllers. Although you can't draw and return a stop using a single button (it doesn't act as a toggle) you can use sliders to do so, although you'll have difficulty finding a controller offering 40 of these! Once I had configured a suitable MIDI map for my test setup (which proved to be simple if a little time consuming) I was then able to save this too.

Organteq also includes a MIDI recorder/player. Its controls are limited to Record, Play (with playback speeds ranging from 0.1 to 10-times real time), Pause, Stop, Fast Forward and Rewind, but it's a very simple way to capture your performances. (If you forgot to press Record before your finest moment, don't worry... Organteq didn't trust you and recorded the performance anyway, and you can then retrieve it.) Once recorded, you can save your performances as well as export them as WAV, FLAC and MP3 files, which is another nice touch. The system will also play and export existing MIDI files. However, that's not the final surprise because, on the stand-alone version, it creates six channels of MIDI data when you save a performance: the performance itself (channel 0), separate channels for the notes played on each of the manuals and the pedals (channels 1 to 4), and another channel for events such as selections of stops, couplers and the control pedals (channel 5). This makes it easy to edit performances in more sophisticated DAWs.

Finally, I should mention that you can resize the GUI. I found that Huge (200 percent) almost precisely fit my Mac's screen, but a 'fit to screen' option would be much better, especially if you intend to use Organteq as part of a dedicated organ setup.

The problem with sample-based pipe organ emulations is that you can't record the pipes in isolation and then mix the samples to recreate the sound of the original because blown pipes interact with one another. Furthermore, the ambient field is slightly different for each pipe so you can end up with something that sounds a bit odd if the pipes are not sampled dry and the ambience is added later while playing. In principle, a modelled organ should overcome these problems provided that the complex algorithms that result can be implemented efficiently enough to run on current tablets and computers.

Recreating the sound of a pipe organ is not easy. In fact, it's bloody difficult.

Since Organteq is (as far as I'm aware) the first moderately low-cost modelled pipe organ, I compared it with low-cost sample-based organs and found it to be superior in many ways. Nonetheless, there are some oddities, and (for example) I was struck by the inconsistencies in the Vox Humana rank, which could be flutey on some notes but brassy on others. Consequently, I think that Organteq still has some way to go before it will rival more expensive options such as Hauptwerk (which combines sample-based sound generation with modelled effects) and Viscount's Physis physical modelling system. We're talking about discrepancies that wouldn't bother most readers, but subscribers to Pipe Organ Fanatics' Weekly will hear the difference.

Moreover, there is a problem. Although Organteq offers a maximum polyphony of 512 voices, each note on each stop uses a voice, so 10-finger chords on a single manual can utilise 100 voices even before you take the decay of released notes into account, and the same chord with coupling can utilise well over 400 voices. I have a MacBook Pro with eight 3.1GHz i7 cores and, even with a long audio buffer, glitching appeared when using a little over 100 voices, and this placed considerable constraints upon what I could play. With some other applications loaded alongside Organteq, played Tutti with everything coupled limited me to three notes before CPU usage exceeded 100 percent and glitching occurred. And who wants long buffers? A small number of milliseconds is acceptable because pipe organs can have relatively slow attacks, but once you're up to 512 samples at 44.1kHz things start to feel decidedly odd. If you're hoping to play Tutti with couplers, you're going to need a supercomputer!

That aside, everything worked well and sounded good when I played Organteq more conservatively, so it will be interesting to see where Modartt take it in years to come. Additional organ models? Access to the pipe models themselves? Programmable turbulence? Tremulants? Models of alternative casings and facades? Surround sound? Blower noise? Leakage? If you look at more mature physical models you'll realise that there's still a long way for this technology to go and, if the development of Pianoteq is anything to go by, it could be an interesting ride.

Affordable pipe organ emulations have until now been based on samples or synthesis. Organteq is (as far as I'm aware) the first affordable modelled pipe organ and, while an immature technology at the moment, points the way to a possible future.