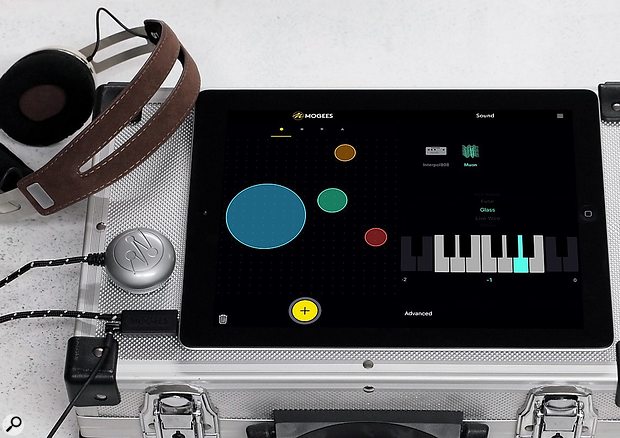 Mogees is a combination of app and vibration sensor which, together, translate physical gestures into notes played on a selection of sound engines. The sensor is circular, classy and solid-feeling with a sticky pad underneath to attach it to any object you care to hit. If paired with an iPhone rather than an iPad it would be an incredibly compact tool for portable percussive performance.

In use, Mogees is all about the number of individual gestures you can reliably reproduce; according to the online help pages, “a gesture is an action that produces vibrations on the surface to which a Mogees is attached. For example tapping a table with your thumb, a coin or a stick will all be different gestures.”

It’s your choice whether to go for a simple but practical surface like a table and use a variety of implements, or to opt for a more complex surface involving different materials or textures, such as a bicycle, frying pan, saxophone or pet iguana. Whichever you pick, you must familiarise the Mogees app with the hits in your repertoire, teaching it each gesture at a variety of velocities. A series of coloured circles represents the results of this analysis, and if they are discrete enough not to overlap, you can be pretty confident the software will translate them accurately. Each gesture may be assigned a note from any of the available synthesis engines; the four currently offered are Blue Steel, Foxtrot, Interpol808 and Muon. Perhaps surprisingly, there’s no built-in sample player. 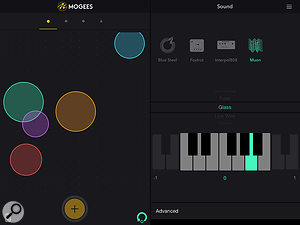 Briefly, Muon is a physical modelling re-synthesizer ideal for generating gamelans, hang drums and all manner of metallic, tuned percussion. Blue Steel supplies plucked strings, its presets varying from conventional instruments such as harpsichord or guitar to the bizarre ‘10 metre string’ and ‘Impure Harmonic’. In contrast, the other two engines are drum machines. Foxtrot is an old-style drum box, as you might find in a home organ, but it has a generous range with up to 20 different percussion voices — a serious test of the number of different gestures you can think up. Interpol808 is an homage to Roland’s famous drum machine and although it’s no dead ringer, there’s lots of fun to be gained from coaxing a few dance beats out of a lampshade or jogging machine, to name my own favourites. 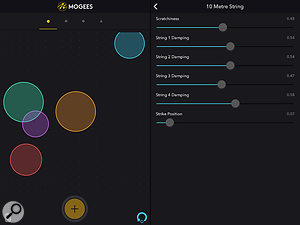 The settings for each gesture may be tweaked, and the sound personalised.

The engines are fairly tweakable, but with no manual yet available, it’s a case of digging into the Advanced menu and trying out the options to see what they do. Take Muon, for example; you can set the tuning, damping, harmonic content, velocity response, ring modulation and several more parameters, and do so for each gesture. Hopefully in future you’ll be able to create libraries of kits and mapped objects because, in this respect, Mogees feels a little under-developed. You can currently save just four Scenes — collections of parameters mapped for each gesture. While these are invaluable for quickly switching between playing, say, a drum machine or a metal string, it might have been nice to store gestures too. At the moment, if you swap the sensor between multiple objects, a quick retraining session is required. 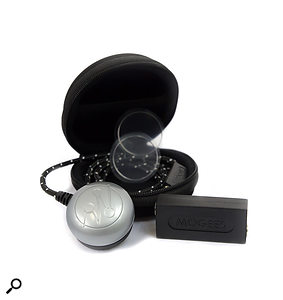 The Mogees hardware comes in a hard case and includes two replacement sticky sensor pads.The sensor plugs into an iPad via a 3.5mm cable, which has a similarly-sized output to connect headphones, speakers or a mixer. A mini-jack to regular jack adapter is also provided. This comes in handy if you’re connecting one (or more) Mogees sensors to your soundcard input(s), because Mogees is also available as a VST/AU plug-in. Currently this is Mac-only (and includes only two sound engines), but in its favour, you aren’t limited to the actions of the Mogees sensor — via its side-chain input you can also drive the engines from audio within your DAW.

Generation of MIDI notes from a sensor plugged into the iPad/iPhone can be achieved over Wi-Fi. I managed to get it working on my Mac and Logic without much difficulty, but I didn’t find the latency low enough to trigger percussion voices reliably.

Mogees isn’t completely kink-free at this stage, but it responds surprisingly well — even to my imprecise hits. Sometimes, starting the app threw me into a ‘logging in’ process that lasted quite a while, which was a bit frustrating, and occasionally I had to re-input my user ID and password before I could start. Finally, I have no instinct for how durable the sticky sensor pads might be in the long run (instructions are provided for washing them) but they felt pretty good. Two spares are provided, along with a solid case for transport, so there’s room for optimism. Ultimately, Mogees is a neat idea that offers huge scope for musical performers, percussionists, performance artists or anyone looking to trigger musical sounds from ordinary objects. A hit!