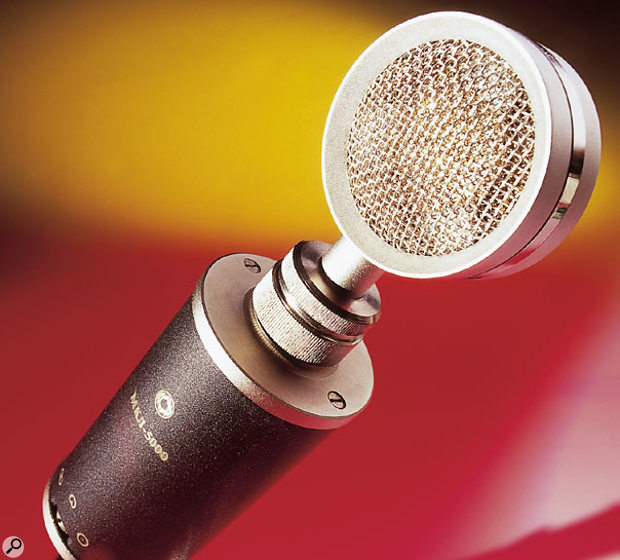 A striking new vintage-style mic from Oktava not only gives a great rock vocal sound, but also offers the flexibility of multiple polar patterns.

The Russian company Oktava have been producing transducers of one sort or another almost since such devices were invented, and they now have an interesting range of affordable ribbon and condenser mics. Quality control was an issue in the very early days, but every microphone is now tested individually, both in Russia and on arrival in the UK, and Western techniques and equipment are employed on the Russian production lines. The subject of this review is the new MKL5000 — a large-diaphragm, multi-pattern valve condenser microphone launched at this year's Frankfurt Musikmesse. In essence, this mic is a remodelled and expanded version of the fixed-cardioid MKL2500 valve microphone, which Paul White reviewed back in SOS in October 2003.

The MKL5000 microphone is supplied in a foam-lined metal flightcase, complete with a power supply unit, a surprisingly short interconnecting cable, and a handbook printed entirely in Russian on recycled paper! Stapled into the back of the handbook are individual quality-control charts showing the measured frequency responses for each of the mic's polar patterns. In the review model, the foam lining was cut in a rather amateurish way, but that may simply be because this was an early review sample.

This model is easily Oktava's largest microphone to date, styled to resemble the classic 'bottle' shape of the first Neumann microphones. The removable capsule 'disk' head measures a massive 64mm in diameter, and the body tube is 65mm in diameter, while the entire assembly measures about 255mm in length. A rather feeble-looking stand bracket is fixed to the bottom of the tube by a threaded ring around a six-pin XLR output connector. This bracket allows the mic to be mounted vertically on a suitable stand and, although there is a swivel joint built in, the bracket isn't really man enough to support the heavy microphone at any angle other than vertical. The bracket is machined with the standard American 5/8-inch thread, but a European 3/8-inch adaptor is not included. The mic is not supplied as standard with an external shockmount, but one is available as an option.

The capsule disk is connected to the body via a threaded locking ring, with three spring-loaded contact terminals connecting the back-to-back capsules to the electronics. The capsule assembly appears to use the same 33mm gold-sputtered unit employed in the MKL2500 microphone, and is supported inside the disk on rubber suspensions. The diaphragms are protected behind dual-layer wire-mesh grilles, but a decent pop screen is mandatory if you intend to use this mic for close vocal work. A bespoke rotary toggle switch at the base of the amplifier tube enables the polar pattern to be configured as figure of eight, cardioid, or omnidirectional. Just like on the MKL2500, there are no other controls on the microphone at all — no pad or high-pass filter. The front side of the mic is indicated by the Oktava logo and model number engraved on the black painted metal body.

The separate power supply is encased in a very plain black steel case measuring 45 x 210 x 160mm (hwd). On the front panel is a mains power rocker switch and red LED, a screw-locking Hirschmann connector for the microphone, a three-pin output XLR, and a button which provides an earth-lift facility. The rear panel carries a fused IEC mains inlet and a mains voltage selector. This PSU supplies 100V DC to the preamp valve anode, along with a 4.5V DC feed, presumably for the valve heaters. The multicore cable supplied with the mic is just under two meters in length, which seems a little stingy and forces the PSU to be placed at the base of the mic stand.

The frequency response plots supplied with the mic indicated a slightly tilted response, peaking at about 5kHz and falling gently below that roughly in a straight line to about 100Hz, where the roll-off becomes more pronounced. At the high end, the chart shows a suck-out between 5kHz and 12kHz, where there is a distinct peak before the response plummets away. These general characteristics seemed fairly consistent for all three polar modes.

The MKL5000 is intended primarily for recording vocals, and the design seems to have been optimised with that role in mind. Like its fixed-pattern sibling, the MKL5000 immediately impresses with a 'larger than life' sound, and if worked quite close it provides a full, rich lower register with a detailed presence region. If anything, I'd say the presence was a tad over-emphasised, but that often proves beneficial within a mix.

With most of the vocalists I was able to try the mic with it acquitted itself very well, although care had to be taken with placement if the singer had a tendency towards sibilance. Like all large-diaphragm mics, tilting or rotating it so that the singer was off-axis helped to control the mic's sensitivity to higher frequencies. However, the short lead became a real frustration in this context, as it made it very difficult to suspend the mic above a vocalist, which I find often helps to reduce sibilance.

The MKL5000 was respectably quiet for a tube mic, but it didn't have the silky smooth sheen that I associate with the very best of the genre. To me it sounds a little rougher — evidence of a relatively high level of harmonic distortion — although this often suits many voices in a rock music setting. The MKL5000 certainly boasts the usual valve qualities of a rich, full-bodied and musically flattering sound, although it's clearly not in the same sonic league as, for example, the Neumann M149, the Blue Bottle, or the Brauner VM. Coming back to a more realistic UK price comparison, though, the most obvious competition comes from the impressive Rode K2, and a decision really would come down to personal preferences. The K2 has technically superior specifications and a slightly smoother, more polished sound, but the MKL5000 looks a lot more impressive (to my eyes) and has a character that may well appeal to some over its antipodean counterpart.

One of Paul White's complaints about the MKL2500 was a problem with the lack of mechanical damping of the mic body and valve, and their resulting tendency to 'ring' if subject to mechanical vibrations. The MKL5000 still suffers in this regard, which makes a shockmount an essential accessory. Other than that relatively minor irritant, though, the mic works well. It delivers plenty of detail and presents a distinctly 'thermionic' sound, with a rich and full bottom end. The valve character is more overstated than many other tube mics, but that will be part of the attraction for many potential users.

Considering the UK price, the MKL5000 offers an attractive blend of styling, sound quality, and versatility. The omni and figure-of-eight patterns offer useful alternatives in the appropriate circumstances, but I suspect few users will actually switch away from the cardioid polar pattern, so the MKL2500 may therefore be the more cost-effective buy. However, if you are seeking something a little bit usual, with a distinctive sound character and vintage looks, and if you have a suitable recording environment and techniques to warrant a multi-pattern mic, then the MKL5000 offers a relatively affordable package.

Another attractively priced mic from the Russians, with vintage styling and a multi-pattern dual-diaphragm capsule. Heavy on the valve character, but with a rich and detailed sound that will suit rock vocals well.