The Practical Craft Of Recording By Mike Senior 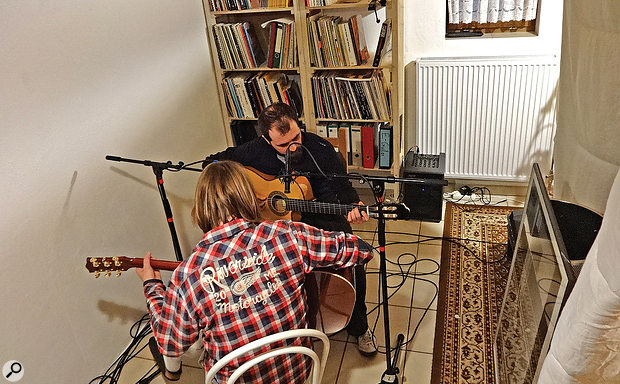 Our engineer describes a novel and affordable way to mic an acoustic guitar duo in a small space.

Recording acoustic ensembles in a typical home studio is so challenging that it frequently requires a certain degree of lateral thinking to achieve decent results. In this month’s column, I’d like to explore a recent recording job of mine which bears this out — where a slightly unorthodox recording technique rather elegantly delivered the goods. The musicians in question were an acoustic guitar duo, and my brief for the session was to find a way that the two players could make good–quality recordings of themselves performing together within their modest home–studio environment, so that they’d be able to develop a range of showreel material at leisure without having to book commercial studio time. The studio, situated in a semi–detached house, offered two main workspaces: the little carpeted and wood–panelled home office where their laptop–based DAW system and monitors were set up, and a tiled basement practice room two floors below.

Whenever you record anything, it’s crucial to have a clear concept of how the outcome should sound. In this case, I’d already discussed target sonics with the players before the session, and we’d agreed to aim for a fairly intimate (though still natural) sound, with some left–right separation between the two instruments in the stereo picture. The musicians were also keen to have the warmth and sustain of a nice hall environment supporting the instruments, and I’d explained that we should therefore try to keep the natural reverb from the small recording room to a minimum, in order to prevent it conflicting with the larger space we’d want to simulate artificially at mixdown.

One of the difficulties with recording acoustic guitar is that its wooden body resonates in such a ferociously complex manner that no single microphone position can ever directly catch more than a small subset of the total frequency energy the instrument emits, so it’s tricky to get a natural sound. For this reason, I almost always prefer recording acoustic guitars in a reflective environment, where alternative facets of the instrument’s sound have the opportunity to bounce indirectly into the microphone, mixing with the direct pickup to give a more holistic timbral picture. As such, I first suggested setting up our mics in the basement room, so we could benefit from the strong reflections from its tiled floor and plastered concrete walls.

The downside of small reflective rooms, though, is that they also tend to have uncontrolled acoustic resonances and considerable reverb of the ‘constricted closet’ variety! Anticipating this, I took a few preliminary precautions. Firstly, given that the centre of any resonant space is usually where you’ll encounter the worst frequency–response anomalies, I decided to set up the players off to one side of the room. Then I used my trusty old bargain–basement lighting stand to hang some heavy quilts from ceiling to floor right across the centre of the room, thereby nixing any metallic–sounding flutter–echoes and reducing the room’s reverberation tail overall. I didn’t do any acoustic damping directly around the players, though, so as to retain the beneficial early reflections — in fact, I artificially reinstated some first–bounce reflections that had been lost to the quilts by leaning a big framed poster up against the lighting stand on that side of the players. 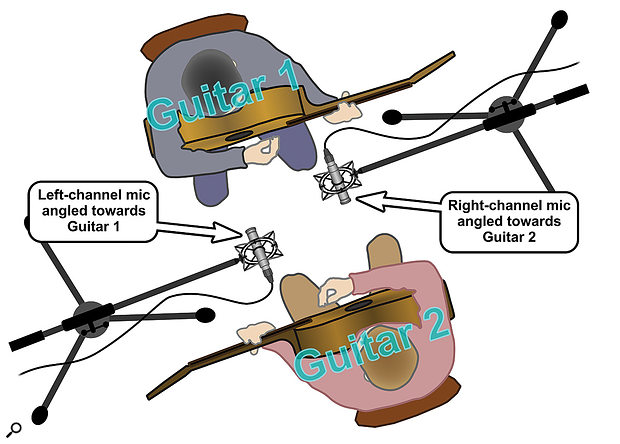 A Game Of Two Halves

Because the players were hoping to discover a miking method they could easily set up for themselves in future, I decided to try a simple stereo pair in the first instance. They didn’t yet have any suitable pair of mics we could use, so given that their budget was limited I decided to use some cheap–as–chips (about £100$150 each) MK012 small–diaphragm omnis from Russian mic manufacturer Oktava. A lot of home–studio users instinctively reach for cardioid mics when they’re trying to minimise captured room reverb, but in my experience omnis are usually better for close–miking comparatively wide instruments such as acoustic guitar, because they don’t suffer from proximity effect or coloured off–axis pickup nearly as much. Having made this decision, the most straightforward mic technique was a spaced stereo pair.

I knew, however, that omni mics would have to be placed within a couple of feet of the instruments if we were going to keep room–reverb levels low enough, and this presented something of a logistical problem. You see, the most obvious way to record any ensemble in stereo is to physically arrange the players as if they’re on stage, and then put your stereo pair somewhere out front, looking at the instruments from a notional audience perspective. With a spaced pair of omnis, your first setup step would typically be to hunt for a miking distance that gave you the desired balance between direct sound and room reverb, and then you’d tweak the stereo setup’s pickup angle (as determined by the spacing between the mics) to accommodate the width of the ensemble as seen from that miking location. 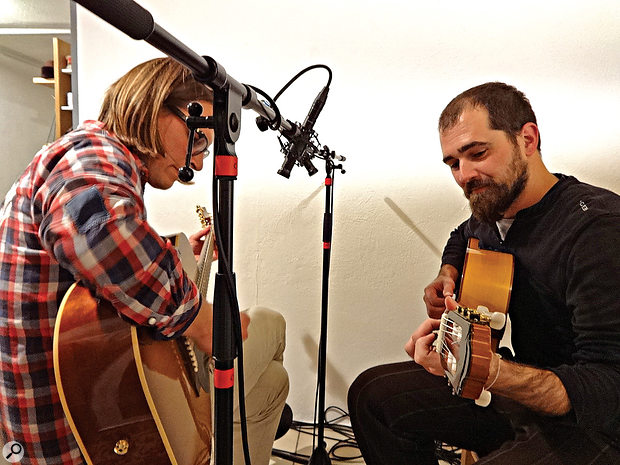 Small–diaphragm omnis are actually quite directional at higher frequencies, so Mike tilted his omni mics to achieve a clearer timbre and improved stereo separation between the two instruments.

A limitation, though, of spaced–omni stereo rigs is that their maximum pickup angle is only about 110 degrees, in my experience. In that case, the mics would only be about a foot apart, and if you tried to widen the pickup any further (by narrowing the mic spacing even more) the stereo panorama of your whole recording would begin to collapse down to mono. Two guitarists sitting side by side present a combined physical width of six or seven feet, which only fits within a 110–degree stereo recording angle if you place the omnis at least five feet away — which I knew would capture way too much room reverb in our basement room.

Fortunately, there turned out to be a rather neat little workaround here. What many small–studio engineers forget is that some stereo microphone techniques pick up just as well from behind the array as from in front, and the spaced–omnis method is one such setup. This meant I could arrange the two players on opposite sides of my stereo rig, allowing me to move them much closer to the mics while also retaining complete freedom over each instrument’s positioning in the stereo panorama — in other words, I could merrily shuffle either player’s seat left or right with no risk of collision damage! This configuration had another important advantage too: the players could hear each other much better playing face to face, and because it was how they set up to rehearse it also provided an immediately comfortable performing experience.

One objection to using this dodge might be that it creates an unnatural stereo picture, capturing the guitar behind the mics with a reversed image, but I felt this was an acceptable compromise to make under these circumstances. Besides, on a purely aesthetic level I figured it would actually make a better–balanced stereo picture if the lower–frequency components of each part, which emanate predominately from the instrument’s sound hole, were on opposite sides of the panorama. (Incidentally, an alterative approach that would address this problem would be to use a crossed pair of figure–of–eight mics, since the rear pickup of that setup has an inherently reversed stereo image which would correct for the image reversal caused by the face–to–face performance layout.) 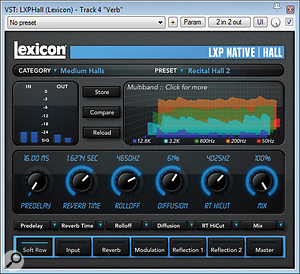 Minimal processing was required at the mix, bar some reverb to transfer the dry recording into a more musically suitable simulated space.

To start with I decided to put the microphones about four feet off the ground, the idea being to keep them off–axis to each instrument’s soundhole and avoid excessive air–resonance ‘boom’ affecting the overall frequency balance. I also initially angled the microphones directly downwards. By design, small–diaphragm omni microphones generally capture a brighter tone on–axis than off–axis, so I reckoned the vertical positioning would therefore give a similar tone for both instruments, as well as emphasising the HF contribution of early reflections bouncing off the floor. Once the instruments were playing, though, the captured timbre felt a bit veiled by the mics’ off–axis sound, so I rotated the mics to emphasise the high end of each instrument — the left–hand mic towards the guitar on the left side of the panorama, and the right–hand mic towards the guitar on the right side of the panorama. This made a real improvement to the result, and also improved the separation between the two instruments in the stereo image.

A little occasional mix automation was employed to refine the balance between the guitars.

Beyond that simple adjustment, though, the ensemble sound coming directly from the mics was remarkably good — intimate and natural in the way we’d hoped, yet still plenty dry enough to make adding effects at mixdown a breeze. All that remained was to finesse the exact positions of the players to balance their levels and stereo positions relative to one another, something that we had to reassess for each new piece of music. In some cases we also swapped out one of the guitars for a different model when simple positioning changes didn’t achieve sufficiently promising results.

And that was it — just two cheapish mics, and no EQ or processing. The mix was pretty much a formality too: a 50Hz high–pass filter to remove some traffic rumble; a decibel or two of low-shelving cut on one of the mics to balance the low–end weight in stereo; our planned hall–reverb send effect; and a bit of fader automation. But did it sound any good? Well, we were certainly happy with the results, but don’t take our word for it — check out this article’s online audio examples at the SOS web site (http://sosm.ag/jan16media) so you can judge for yourself!