Recording a gig and sharing the video online is a great way to get your name out there, and Olympus have created a pocket-sized way to do just that. 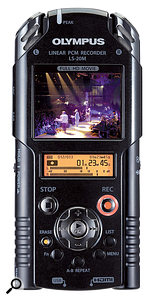 Though portable audio and video recorders have been around for a long time, it's only recently that the former have started to be released with HD video recording included. While it's been possible to capture high-resolution video with a portable device for quite a while too, so much so that even some mobile phones can make decent video recordings, the sound has always been poor. This is especially true in high-SPL situations such as gigs, where audio recordings on a mobile or similar video device would be likely to clip horribly.

The LS20M builds on the success of the Olympus audio recorders, the LS10 (reviewed in SOS June 2008) and the LS11, and thus has quite a strong heritage. It records audio in either WAV or MP3 format, at up to 96kHz/24-bit quality, storing the files to SDHC cards of up to 32GB in size. A pair of microphones are built in, as well as a mic input jack and a headphone output, and you can switch easily between audio and video capture mode with a small, solid switch.

As portable audio and video recorders go, it's slim and dense, feeling quite like a smartphone in the hand. Though entirely plastic, it feels satisfying to the touch, inspiring confidence that it won't stop working after a bit of rough treatment! The SD card door is strong enough, and all the controls have a good level of click and resistance to them.

There a two separate LCD displays on the front: a two-inch colour one for video monitoring and menu navigation, and a two-line monochrome affair specifically for audio levels. Each of these has adjustable brightness and contrast.

The colour display on the front is surprisingly bright and clear. Although it does show some mild colour 'banding', when the actual footage does not, that's not a working issue for this level of equipment, more a technical point.

The LS20M is powered by a rechargeable lithium battery, which is pretty convenient, but if you're caught short of charge and don't have a nearby USB cable, you won't be able to find a battery in the local shop. That said, USB power is pretty much ubiquitous these days, as are miniature USB cables, so I much prefer this lightweight battery to AA cells. A spare battery is recommended for long recording sessions or a whole night's gigging, but note that battery life only suffers noticeably when you're recording video and audio at full rate. 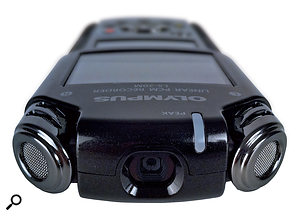 The LS20M is intelligently designed, with the lens pointing in the same direction as the mics, on the top of the device.

The stereo field of LS20M recordings has something of a 'centre, left and right' feel to it, compared to the smooth circle that can be created by a coincident pair of mics, like those in the Zoom Q3HD. This is less of an issue at a distance from the artist than it is close up, where movements across the field can be quite sudden.

Recordings from the LS20M are clear are quite bright: slightly light on the low end but with plenty of mid-range and high-end detail. The voicing is reminiscent of a pair of small-diaphragm condensers, such as those that are often used for capturing acoustic guitar. It's a nice tone, and gave my recordings a sense of immediacy and clarity, especially when I was a fair few feet from the band and in a rather dead-sounding room. Although I couldn't find statistics for headroom I had no problems with SPLs of around 90dB, once I had the gain set correctly. Gain has 30 levels, with master sensitivity settings for loud and quiet environments.

When recording video, audio is limited to 44.1kHz or 48kHz for 16-bit WAVs, or 88.2kHz or 96kHz for 24-bit WAVs, so you'll need to use a higher sample rate if you want more bit-depth. The headphone amp is very quiet — especially considering that much of the material it's used for will be very dynamic live recordings — and it fails to drive larger cans to a high enough level. More sensitive IEMs can reach a decent listening volume, though, so they're recommended for monitoring. The only thing I didn't like on the audio side of things was the optional limiter, which kicked in a bit too early and was a bit aggressive, making the audio rather messy. Interestingly, the LS20M can be used as a portable audio player, and a six-band graphic EQ is included specifically for adjusting playback.

Video is captured using a tiny CMOS sensor, through a fixed lens that has an equivalent focal length of 35mm (a relatively wide angle). Files can be recorded at 1080/30p, 720/30p or 480/30p, with no other frame-rates available. Videos are shot at 1080p and encoded using the AVC (Baseline Level 4.1) codec in an MP4 container file, with the variable bit-rate averaging around 15Mbps (see 'Terminology Tips' box).

That's not a huge bit-rate for HD video, so there is some pixellation with extreme motion, as well as lower detail in dark areas of the image. Since the sensor is so small, it performs best when there's lots of light available, the image becoming noisier as things get darker. A sensor of this size is never going to be the best in a black room with a single light-bulb, but it does surprisingly well, considering.

If you're scaling the 1920 x 1080-pixel image down to a smaller size for web, you'll find that this helps to counteract most issues with the video: it disguises noise and pixellation a little, as well as helping with any image softness.

Automatic exposure is measured by either spot (centre) or zone metering, and can be adjusted by two stops in either direction (darker or lighter) in one-third-stop increments. This translates as a nice degree of control over exposure for such a small and inexpensive device, especially since such recorders usually rely on entirely automatic exposure.

Video clips are limited to 4GB in size (about 30 minutes of recording at highest video quality), and the battery at this setting will only yield just over an hour of recording time. The FAT formatting used for the SD card prevents larger file sizes, so in order to get round this time limit you'll have to shoot at a lower resolution, such as 720p.

The LS20M's lens points out of the top of the device, which works pretty well, and helps when the recorder is mounted on a tripod, as it allows you to look directly down on the screen. Digital zoom is available, and for those not in the know, this differs from optical zoom. An optical zoom moves the elements of the lens in order to narrow the angle of view of the light striking the sensor. With this method, full resolution is maintained. Digital zoom involves scaling up a smaller portion of the sensor in order to create a full-size image. With such a tiny lens, optical zoom can't be expected, but the digital algorithm used here actually scales well. It creates a decent 1080p image from the 5MP sensor, which is a testament to Olympus' long history of optical research and product development.

I was surprised by the number of options available on the LS20M, especially multi-zone exposure metering and exposure compensation on the video side. Being so used to fully automatic portable video products, it was nice to be able to exercise some creative control over the image. The rest of the menu system manages to be both comprehensive and easy to use, thanks to sensible subdividing and good use of the four-way navigation button, so despite the variety of features the LS20M isn't hard to use at all, which is definitely in its favour.

The Olympus LS20M is my favourite of the dedicated audio recorders with HD video capture included, providing a clear, bright audio recording and video that's perfectly good for web sharing or editing together with footage from other small-sensor HD cameras. It's convenient, easy to use and has just enough options to help you get the most from  live recording. A recommended product for blogging bands and gig enthusiasts alike.

Currently, the only real alternative is Zoom's Q3HD ($249£199), which uses X/Y mics and has a less bright tone, but similar video quality. I like the stereo mic setup of the Q3, but prefer the frequency balance and detail of the LS20M, as well as many other things about it.

Small in terms of size and weight, yet solidly made, the well-designed LS20M packs in a whole lot of audio recorder, with the added bonus of HD video recording. Viewing the captured video at full size reveals the limits of such a tiny sensor, which needs a lot of light in order to work well, but for web-sized video of a band or performance it's easily sharp enough, and it has enough headroom to capture the all-important music. A great little piece of kit.