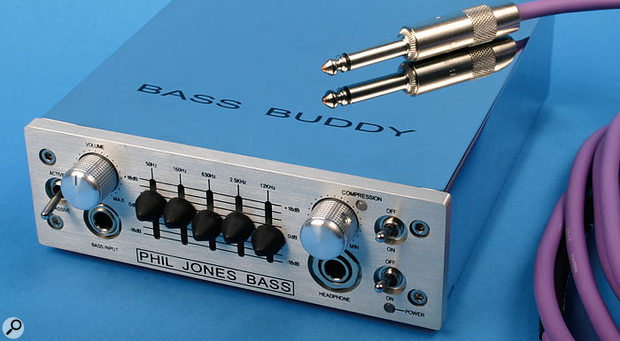 The Bass Buddy includes several useful facilities, including compression and a five-band EQ.

With an input that is switchable to match both active and passive bass guitars, the Bass Buddy is, in essence, an active DI box optimised for use with bass guitars, incorporating both a five-band graphic EQ and compression. The graphic equaliser settings are chosen to suit the characteristics of the bass guitar and have centre frequencies of 60Hz, 160Hz, 630Hz, 2.5kHz and 12kHz with a generous cut/boost range of ±18dB. Power for the unit comes from an included mains adaptor or from a pair of 9V batteries. Most DI boxes can operate from phantom power, but this one can't, and the reason is that it also includes a 10 Watt power amplifier, enabling the box to directly drive a loudspeaker of between 4 and 10 Ohms impedance. In fact this little box includes a number of features and options that are not immediately obvious, so a quick tour of the front and rear panels is probably the quickest way to get to know it.

The only connections on the front panel are a jack input for the bass guitar and a stereo headphone outlet jack . The selection of active/passive instrument, power and compressor in/out is handled via small toggle switches, the latter two having status LEDs. There's a volume control to adjust the input level, a further single knob to control the amount of compression and five very short-throw faders to set the graphic equaliser cut/boost levels. The compressor has a fixed 3:1 ratio, and I assume the attack and release times are preset for bass guitar as there's no adjustment. The blue status LED comes on when compression is taking place, and the compression knob adjusts the threshold, so most compression occurs when this knob is turned furthest anticlockwise.

On the rear panel are jacks for both the line out and speaker output, with a further very low-impedance balanced XLR output that can drive long cables where required. The jack line output is really intended for hooking up to a tuner, and my only concern here is that it would be very easy to plug into the amp output by mistake, which could risk cooking your tuner. The unit also has a stereo Aux input on a 3.5mm mini-jack. This signal is mixed with the bass sound to feed the main and phones outputs, but not the jack output. The Aux input is for playing along to backing tracks, which is as good a way as any of practising. There's no level control for the Aux input, so this must be controlled at source. Access to the rear-panel battery compartment is via a couple of captive, knurled thumbscrews that allow the battery cover plate to be removed.

The Bass Buddy offers a bit more than your average DI box — looking at the rear panel, you can see the output for the 10 Watt power amplifier, which is capable of driving a loudspeaker of between 4 and 10 Ohms impedance.Mechanically, the unit is meticulously engineered with a heavy chromed-metal finish and a thick alloy front panel. All the jacks and knobs are metal and the included PSU automatically adapts itself to the incoming mains voltage. The unit comes with PSU, power cable, mini-jack to stereo RCA phono adaptor, stereo mini-jack cable and polishing cloth, in a padded nylon carry case. Technically it functions well, with the graphic equaliser giving plenty of tone-shaping control without introducing any significant noise. The compressor also stamps on dynamic excesses very effectively, without squashing the energy out of the sound so, where a clean bass sound is required, you could simply plug the Bass Buddy into a recording system and get on with the job. What it lacks, of course, is the harmonic dirt that a real amplifier and speaker add so, for styles that require that type of character, you'd need to look at further sound-shaping via plug-ins or other processors. Furthermore, it could be argued that in a system that does use plug-ins, you could get similar results by using a decent instrument DI box combined with a plug-in EQ and compressor. In all other respects, though, the Bass Buddy is a very well thought-out one-box solution.

Listed at £249, and available via Synergy Distribution, the price includes a carry case and a worldwide power adaptor. Paul White

SUMMARY The Bass Buddy is a high-quality DI, with switchable input for for both active and passive bass guitars. It has a range of additional features, including five-band EQ and compression, and ships with a worldwide power adaptor and carry case. T Synergy +44 (0)121 270 648 www.synergydistribution.co.uk www.philjonesbass.com

Little Labs specialise in building those apparently boring little gadgets that are essential to make a studio function properly, and a very good job they make of them too! Apparently, this latest offering is a collaboration with US company Mercenary Audio. It aims to allow signals from an electric guitar fitted with passive pickups to be sent over long distances without degradation. A typical application for a device of this type is when the player is in the control room and the amplifier is some distance away in a live room. Conventional cables lose more top end the longer they are, and longer lengths are also more prone to interference problems. Little Labs have solved this by building an active transistor buffer into the jack-plug end of the included cable, which is powered via a couple of batteries in the DI box-sized output unit. The included cable is no longer than a normal guitar lead, but it can easily be extended from its XLR end using standard mic cables, up to a maximum of around 100 feet. The jack goes into the guitar, the XLR end goes into the output box, and from there you can take two separate jack feeds (with switchable ground lift on one), to feed a guitar amplifier and one other destination simultaneously. 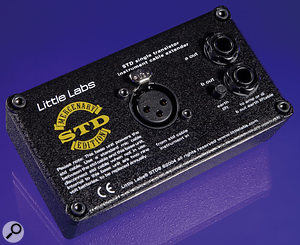 Little Labs' diminutive STD allows guitarists to reach amps that other boxes cannot reach, without compromising the signal — which makes it perfect for guitarists who want to play in the control room while their amp is miked up in the studio.At the heart of the system is a single-transistor, unity-gain buffer circuit, which I assume is basically an emitter-follower designed to present a high-impedance input and low-impedance output. This is mounted inside the quarter-inch jack at the end of the included cable and is designed to load the instrument pickup correctly, in order to produce a natural frequency response regardless of cable length. What isn't specified is whether the capacitive load of a typical guitar cable has been emulated; many guitar pickups are designed to sound at their best running into a cable of known capacitance, and removing this load may move the resonant peak of the pickups themselves. Subjectively, though, I have no problem with the sound.

At the other end of the cable is the cast aluminium base unit, which would normally be located close to the guitar amplifier, and connected to it by means of a short, unbalanced jack cable. This unit contains the receiver-end circuitry, which is made from very high-quality parts. The active buffer is powered by two 9V batteries that, in normal use, should last over one year providing you unplug the cable when not in use. The idea is that the signal presented to the amplifier will appear as though it came directly from the guitar, so that the tonality won't be adversely changed, as it might be if you used (for example) a generic DI box. There are warnings that the buffer in the cable could be damaged by static electricity (in which case a replacement is available at a sensible cost) but, providing you handle the cable sensibly, I can't see this being a serious problem. My one minor gripe is that you have to find an Allen key to remove the bottom of the box when you need to change the batteries. Crosshead screws might have been more user-friendly here.

I tested the STD system in place of a very ordinary 20-foot guitar cable and noticed a subjective improvement in the tonality, which seemed to retain a little more body and warmth. The level of noise picked up by the guitar seemed lower, and the playing feel was also a hint springier, which suggests that the responsiveness of the instrument had been improved slightly by the change in loading. These differences were fairly subtle, but were repeatable and very real. Extending the XLR cable didn't produce any audible change to the sound, which is what you'd expect by buffering right at the guitar's output, and having a second output with a ground lift means that you can feed a guitar amplifier and a DI box connected to a recording system at the same time without having to worry about ground-loop hum.

At £112 including VAT, the STD sells for around the same price as a good overdrive pedal, which is good value for such a professional piece of equipment. It makes a worthwhile addition to any studio where you need to separate the guitar and amplifier by more than around 20 feet. It also doubles as a signal splitter, so I can see a lot of studio applications for a box like this. It may not look exciting but it does exactly what it claims to and is highly recommended. There are lots of DI and buffering tools around, but this is the best I've tried to date. Paul White