Have PreSonus got what it takes to break into the already crowded market for affordable monitors? 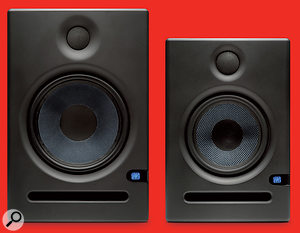 It's no secret that, as the process of recording and mixing music has been increasingly taken over by software, audio hardware manufacturers are looking more to the start and end of the audio chain to provide them with an income. That's why there's so much choice these days when it comes to mics, preamps, audio interfaces and studio monitors. Based in Baton Rouge, in the extreme south of the US, PreSonus are well established in the preamp and audio interface market, and in recent years they've made their mark with their StudioLive digital mixing consoles. Now they've added loudspeakers to their portfolio, with the new Eris range aiming for the affordable studio monitor market. The Eris E5 is the smallest of the new speakers, while if you need something a little larger there's the Eris E8. Both models are designed in the US and assembled in China — a common scenario these days.

Taking the E5 first, its outwardly conventional two-way, front-ported box houses a 5.25-inch Kevlar-coned woofer and a one-inch silk-dome tweeter, protected behind its own metal grille. Powered by a 45W and 35W Class-AB amplifier for the lows and highs, respectively, the speakers cross over at 3kHz. The specs give a usable frequency response of 53Hz to 22kHz, and a surprisingly loud maximum SPL of 102dB at one metre.

Built from vinyl-finished MDF, the internally braced cabinets measure a compact 178 x 195 x 260 mm and weigh a reassuring 4.63kg each. The slot-shaped port is located on the baffle below the woofer, while the baffle is curved and slightly sculpted around the drivers to smooth out any sharp angles that might otherwise result in diffraction. A discrete PreSonus logo illuminates when the speakers are switched on.

Audio input is via a choice of balanced XLR, balanced quarter-inch TRS jack or unbalanced RCA phono socket, and power is on the usual IEC socket. A red slide switch selects the appropriate mains voltage. Many small monitors lose out on rear-panel adjustment, but the Eris E5s are particularly well appointed in that department. In addition to the usual gain control, there's an acoustic space switch that may be used to optimise the bass response to compensate for placement near to walls or corners. This offers a choice of flat, -2dB or -4dB responses below 800Hz. Then there's a low cut-off switch, with settings for flat, 80Hz and 100Hz, the last two engaging a 12dB/octave high-pass filter. Finally, both the mid-range and high end are separately adjustable — a pair of centre-detented rotary controls gives ±6dB of adjustment for each range. What you don't see is that the amplifier pack also includes filtering to reject RF interference and damaging subsonic lows. Output current limiting, over-temperature and transient protection are also present. 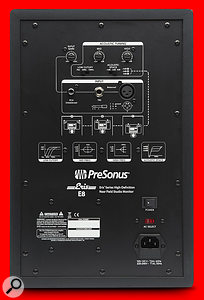 The E5 and E8 both feature the same comprehensive frequency-response tailoring options.

With exactly the same connectivity options, frequency response tailoring and design ethos, the E8 goes down to 35Hz and has more power in the amplifier department, with 75W available to the woofer and 65W to the tweeter, adding another 3dB to the maximum SPL of the E5. The crossover frequency is lower, at 2.2kHz, and the cabinet work is larger and heavier to take the eight-inch woofer and 1.25-inch tweeter. Measuring 250 x 299 x 384 mm, these speakers are more than twice the weight of the E5s at a hair over 10kg each, but follow the same style and general construction.

Switching on the E5 speakers doesn't result in any unwanted pops or bangs as the circuitry is designed to have a 'soft start-up'. I made sure all the controls were centred and set the environment bass switch to flat, as the speakers weren't particularly close to either the side or rear walls. In comparison with a couple of other sets of monitors costing around three times the price, the sound was extremely revealing and not at all what I'd expected from such small and inexpensive speakers. Other than the larger speakers having more authority in the deep bass, there was actually nothing small-sounding about the Eris E5s at all. Everything came over smoothly yet with plenty of detail; vocals sounded absolutely pristine, and though the bass lacked the depths of a larger monitor it still managed to sound tight and solid. You can hear right away whether a pair of monitors is going to tell you what you need to know while still being comfortable to work with for long periods, and it took me only a few moments to recognise that the Eris E5s would do the job very nicely. The imaging was great, the mid-range clear and well-focussed, and the highs were detailed without being aggressive — which is often a problem with cheaper monitors.

In the smaller studio where monitors capable of too much bass extension would only provoke the inevitable room problems, the Eris E5s would appear to be a great choice — and I've heard speakers costing twice as much that don't deliver nearly such 'adult' results. They benefit from being raised above the desk rather than sitting directly on it, so some good-quality speaker platforms (or some cheap foam ones with a heavy floor tile on top) would make a worthwhile improvement to their bass tightness and general focus, but then this advice applies to most desktop speakers.

Switching to the E8s reveals, as expected, greater bass extension and a little more headroom. They have a very similar sound, and, as with the E5s, the bass is reasonably tight sounding rather than being boomy and flabby. The larger tweeter still manages to deliver detailed but smooth highs, while the mid-range carries vocals well and provides a detailed window into instrument sounds.

Given their pricing, both monitors deliver great quality, and though spending more might give you a little more in the way of fidelity, the law of diminishing returns most definitely applies — and being realistic, unless you have a really well-treated studio space, the differences might well be lost anyway. The E5s are ideal for the smaller room where more bass extension would simply stir up room problems, while the E8s would be well suited to a garage-sized studio. These are the first monitors from Presonus but it would seem that, as with everything else they build, they did their homework first.

Finding a very small speaker that doesn't disappoint can be a tough call. As alternatives to the E5s, check out KRK's smaller speakers and the ESI nEar 05s, as these both turn in a good performance for the price. There's even more choice in the eight-inch monitor market, with the likes of Mackie, KRK, Fostex, Adam, Eve and Genelec all offering very capable products.

These are the first PreSonus monitors I've listened to under studio conditions and I have to say that I'm very impressed by what their designers have achieved.