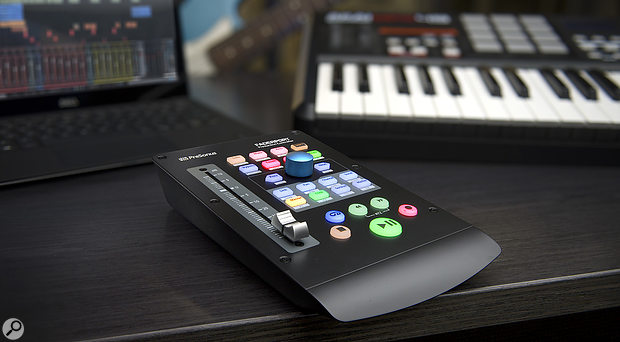 The updated FaderPort aims to give you comprehensive DAW control with a single fader.

Adopting additional features from the FaderPort 8, this new single‑fader DAW controller supersedes the popular FaderPort Classic and is simply called FaderPort. Around 50 percent longer than the original FaderPort, this FaderPort is only a fraction wider and has a similar button count, though a rotary encoder with integral push switch has been added. It is more ‘styled’ than the original, following the lines of the FaderPort 8, but still enjoys a rugged metal housing with a long‑throw 100mm motorised fader.

The FaderPort comes complete with external, universal voltage PSU and USB cable, but unlike the original, use of the PSU is mandatory — there’s no bus powering for those who don’t care about a moving fader. As with the previous model, the fader generally controls whatever track is currently selected. Once registered, users also get a free copy of the Studio One Artist DAW and can also download the Universal Control software, which prompts when firmware updates are necessary and handles their installation. I needed to do a firmware update on the review model and it worked seamlessly. One immediate benefit of the new model is that no drivers are required for operation; it comes plug‑and‑play ready for use with Studio One but a simple ‘power up/button press’ routine can turn it into a dedicated controller for ProTools (HUI), Logic Pro X (MCU Logic), Cubase/Nuendo and Ableton Live (MCU).

The familiar transport buttons are at the bottom and all buttons are backlit in appropriate colours when active. Two sets of eight buttons reside above and below the encoder with two more buttons to the sides. The Shift key in the top left‑hand corner gives access to alternative button functions.

Most of the primary button modes are self evident from their titles and all the routine operations such as fast‑wind/rewind, track arming, mute, solo, metronome, creating or locating markers, cycle on/off and so on are easily accessible. There’s also direct access to automation modes and a shift function for the arrow‑shaped Previous and Next buttons, allowing them to double as Undo and Redo buttons. Other functions include using the encoder to adjust panning, both vertical and horizontal zooming, track selection, master level adjustment and to scroll the time‑line cursor back and forth through a song (both coarse and fine scrolling modes are available). The addition of the encoder is very welcome and greatly extends the usefulness of the controller.

The FaderPort’s back panel sports a power button, an input for the external PSU, a quarter‑inch footswitch input and a USB‑B port.Currently, the Link button is there solely for the benefit of Studio One users, and allows the encoder to adjust any control knob that you click on with your mouse. It has, as yet, no function in any of the other DAWs. A Flip mode switches the actions of the encoder and fader, and there’s also a Bypass button that can be used to bypass all the plug‑ins inhabiting the selected Studio One track or, in conjunction with Shift, to bypass all the plug‑ins in the current song. Studio One users can also re‑assign the FaderPort controls from within Studio One. In the Logic X Pro mode, the Bypass button is used to engage Trim Automation.

As is common these days, the manual is a download and covers use with all the supported DAWs, as well as offering basic instruction on getting started with the free copy (also a download) of Studio One Artist.

I tested the FaderPort both with Studio One v4 and the latest Logic Pro X, confirming that the controls all worked as described in the manual. In Logic X mode the controller emulates Mackie Control/Logic Control hardware, and once selected in the Controller Setup page it is necessary only to select the input and output ports as FaderPort 2. The manual explains all the Logic, Cubase/Nuendo, Live and Pro Tools setup and control options as these differ slightly between DAWs.

I was initially confused by the Play/Pause button operation in Logic mode (until I read the manual) as the pause function doesn’t work conventionally. If you want playback to pick up from where you stopped, you need to stop by using the Stop button. If you use the Play/Pause button to stop and then restart, it starts playback from your previous Play position, which is actually very useful. The four shift Function buttons give immediate access to Logic’s first four screensets and Master uses the encoder to adjust the master fader in Logic’s mixer.

Studio One users enjoy all the main control operations along with more deeply integrated functions such as the aforementioned ability to target controls for adjustment from the FaderPort and to reassign controls. For me, the biggest improvement over the FaderPort Classic is the addition of the encoder as I like to use a Scroll wheel for navigating my songs. If there’s a criticism it is that there’s no way to unhitch the motorised fader if the noise of it moving (which isn’t excessive by any means) distracts you. It has never bothered me, but I know some people would like to be able to turn off the fader. Another point is that if you want to use the FaderPort with your laptop while away from your studio, the lack of a bus powering option means that you need access to a mains power socket, so the FaderPort Classic was more practical in that role.

While it would be handy to have the option to reassign some of the buttons to other key commands in DAWs other than Studio One, the FaderPort has the benefit of being ergonomically designed, very straightforward to use and it provides convenient access to most of the commonly used DAW functions as well as transport control. Indeed, I’m seriously impressed as to how many useful operations PreSonus have managed to pack into this very compact production controller. At one time I had three [Mackie] multi‑fader controllers filling my entire desk space, but having switched first to a FaderPort Classic and now to FaderPort, I can’t say that I miss them at all.

A thoughtful update on the classic FaderPort recipe.