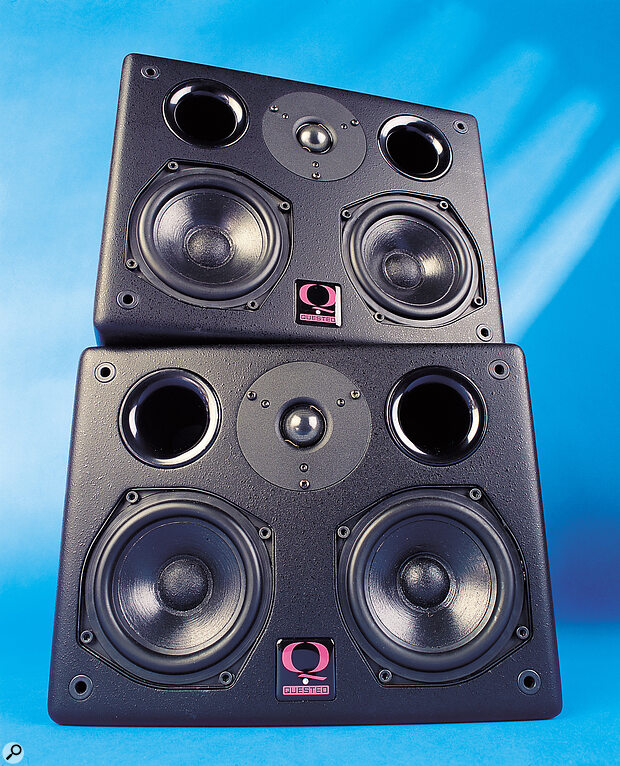 Roger Quested has been building active studio monitoring systems for about as long as active studio monitoring systems have been around. In recent years, however, he's extended the range to encompass active nearfield speakers that are suitable for a number of broadcast, recording and post‑production applications — the latest being the VS2205, a compact, two‑way active monitor featuring a pair of magnetically shielded 130mm bass/mid drivers augmented by a 28mm soft‑dome tweeter, all in a compact, dual‑ported enclosure. Integral amplifiers deliver 110 Watts to the bass/mids and 50 Watts to the tweeter (continuous power rating) with a fourth‑order crossover operating at 1.25kHz. The box size is just 340 x 265 x 282mm, yet the overall weight is a reassuring solid 13kg. A textured black finish gives the cabinets a smart, businesslike look and the cabinet corners are rounded to help minimise both diffraction and transportation injuries!

Anodised blue heatsinks on either side of the cabinet indicate that this is an active monitor, as does the presence of an IEC mains connector and its attendant mains switch on the rear panel. The speakers must be oriented tweeter uppermost as opposed to having the two bass/mid drivers vertically aligned, not only for correct acoustic performance, but also to allow the cooling to work correctly. When powered up, a green LED shows in the middle of the Quested logo. This LED will flash red in the event of a level overload and light solidly red if the thermal protection circuitry cuts in.

A balanced XLR carries the input signal at line level, and to aid setting up in different environments and with different sources, there's also a screwdriver‑adjustable rotary gain switch that provides 10 steps in 2dB increments. A couple of three‑way toggle switches allow the overall response to be tailored to suit the room/operator and also to match the LF response to the optional subwoofer. The low‑frequency switch offers either flat, extended bass or external sub settings while the HF end can be flat or treated to 1.5dB of cut or boost above 6kHz. With the switches set to flat, the nominal frequency response extends from 75Hz to 19kHz (±2dB), but the optional subwoofer takes the bass end down as far as 20Hz.

Switching on the VS2205s results in a small thump, but it's pretty insignificant. Similarly, switching off results in a low‑level chirp of amplifier instability. Once they're running, however, the sound is pure Quested — just like the big Quested studio monitors but scaled down in SPL and bass extension. You can get more level out of these monitors than I'd want to sit in front of for any length of time, so maximum SPL shouldn't be an issue.

The soft‑dome tweeters lend the high end a smoothness that their metal‑domed counterparts rarely equal, though anyone used to working with metal‑domed monitors might interpret this as a lack of detail. It isn't! Any speaker designer will tell you that getting the mid‑range right is the key to producing natural‑sounding vocals, and the VS2205s don't disappoint here. Everything sounds well integrated with clear stereo imaging, yet you can still hear 'into' the mix and separate the various elements quite easily. Even the bass end is surprisingly big and solid, given the size of these speakers, though in comparison with monitors that have true deep bass extension, they can sound just a hint tubby, especially at higher listening levels. Having said that, I think they have about the right low‑end characteristics to suit most project‑studio environments — you'll need a properly designed room to use the sub if the bass isn't to end up completely out of control. The bass‑lift switch can be used to firm up the bass a little more if needed, an option that's particularly useful when monitoring at more modest levels.

There are plenty of active monitors to choose from, starting at under £500 and going up to whatever you'd like to pay. Though not the cheapest option, the Quested VS2205s turn in a good performance, and anyone who's used Quested monitors before will appreciate the 'family' sound of this new model. Physically, the speakers are designed to present a reasonably low profile, which is an advantage in most studio situations, and the use of two relatively small bass/mid speakers keeps the low‑frequency transients tight as well as helping create a clear mid‑range. The inclusion of magnetic screening means the monitors can be used close to a computer screen in an edit suite or sequencer‑based studio, and of course they share the advantage of all active monitors — that you don't have to agonise over what power amp to buy or what kind of speaker cable to use. As I said, this is now quite a crowded sector of the market, but if you can get to hear a pair of VS2205s before making your mind up, you should definitely take the time to audition them.