Trafik are the electronica duo Andrew Archer and John Elliott, on the Global Underground label, and when they're not hobnobbing with the dance aristocracy they're releasing mix albums and remixes in droves, and underscoring for CSI and various Playstation games. Their eponymous sample library forms part of Loopmasters new Artist Series, which aims to provide bleeding-edge sounds with an unassailable pedigree. If you're suspicious that people with this kind of profile might just be cashing in with a bunch of second-rate material scraped from some dusty corner of an old hard drive, then let me lay your fears to rest — there's no doubt that Trafik are firing the big guns here.

More than 120 loops are offered in three main folders: Drums, Bass and Music. In the first of these, the all-important kick drums are characterised by a concrete-solid low end, setting a hard-nosed tone far from the 'poke you in the eye' mid-range click cliché of the plastic chart-surfers. The programming is as inventive as the 'progressive' subtitle implies, but with an infectious groove and lots of hairily mutated percussion sustains. Characterful effects are frequently on show as well, but these guys shrewdly keep their funky delays and distortions from obscuring the kind of chunky bone structure that wears even complicated arrangements lightly. What's really knock-out, though, is the programming dynamics, which supply ample sucky side-chain madness without giving away any transient wallop — this is partly clever processing and partly expert use of reversed snippets and twisted ambiences, and is a real tour de force.

The bass loops are also enormously satisfying, reminding me pleasantly at times of the Chemical Brothers' 'Private Psychedelic Reel'. Vying with the drum programming for rhythmic bounce, these pile on the oscillators and distortion, and periodically rearrange small items of your furniture, much as you'd hope. The synth riffs and chordal patterns of the Music Loops folder, on the other hand, don't uniformly demand the same level of attention as the drums and basses, despite fine sonics and the odd 'how the hell did they do that?' moment tucked in to reward the conscientious browser.

On top of all this, there's a set of folders with one-shots and two-note/octave multisamples to fit in with and supplement the loop material. There are some diamonds to be mined here, and churning through the raw one-shots also underlines how much talent Trafik have brought to bear in transforming them into living, breathing, pulsating beats.

One niggle: I found the "featuring 1.2GB of material" on the back of the pack a bit cheeky, when you actually only seem to get about 400MB duplicated across the (admittedly numerous) different sampler formats. However, had this collection even been a standard £70 job here in the UK I'd probably still have been obliged to give it five stars for sheer quality. At half that price, though, Christmas has arrived early for anyone wanting an injection of intelligence, danceability, and magic for their chosen flavour of IDM. Mike Senior

With a lot of hip-hop and R&B libraries, I find that the beats outshine the rest of the samples, but this release from Ueberschall exhibits the opposite problem. Despite some nice ramshackle groove to the programming, there's no getting away from the fact that kick drums seem to lack that kind of 'knuckle-duster in the kidneys' punch that I'd expect, and only the odd one musters enough rattling, rumbling krunk tail to offer much in the way of compensation. In addition, although some of the claps have a certain credibility to them, the other kit elements and percussion seem merely usable, rather than 'use me or I'll shoot you' — Uzible, if you like... 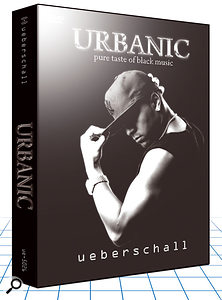 The instrumental riffs and synth parts, on the other hand, include a lot of really good imaginative stuff, nailing 'cheesy-but-cool' without wallowing complacently in tired GM Soundfont clichés. There's a large helping of those fizzy polysynth pads that are springing up all over the charts like a rash at the moment (think Rihanna's 'Umbrella', for example), as well as some nice crusty effects and judicious vinyl patina. Basses are often enormous and packed with character — a highlight of the library for me — and there are also some lovely wordless sampled vocal phrases, obviously digitally manipulated but with a deft musicality that really works.

I'd personally have preferred a slightly more aggressive attitude to some of these parts (and, indeed, the production as a whole), but in some respects that makes this library more usable for R&B than are a lot of the more straight hip-hop libraries, and would suit artists with a slightly slicker, smoother image. I also felt that the style trespassed a bit too far into urban electronica at points, and although you could call this cutting-edge, I couldn't quite shake the nagging impression that I was listening to underground breakbeat producers moonlighting outside their comfort zone...

Fortunately, a lot of these criticisms are mitigated by the construction-kit format, allowing you to underpin Urbanic's bass and instrumental riffs with other drum parts that really put the boot in. Also in the library's favour is the way its respectable 2.8GB bulk has been organised within Ueberschall's bespoke Elastik Player (for more information on this, check out my review of Groove Shadow Elastik back in SOS February 2008). There are 34 themed sets of construction kits, each set containing main, intro and outro kits, as well as another variation kit in some cases, and each set of kits also includes an additional Elastik Player preset containing single-hit drum samples taken from the main drum loop. Each set's original key and tempo is displayed, but the Elastik Player technology provides a lot of flexibility for bending samples outside these to fit pre-existing tracks.

So although Urbanic might not exactly supply all your hip-hop and R&B needs, there's enough here that to make it worth checking out if you've already got the basics covered elsewhere in your sample vault, but are on the lookout for some creative instrumental hooks to freshen things up. Mike Senior

XLN Audio's Addictive Drums is a great-sounding and highly playable virtual instrument, but the factory drum kits and styles are very much oriented towards modern pop and rock production. AD Retro, the first add-on pack for the instrument, expands this palette with the help of three faithfully sampled Ludwig kits from the '60s and '70s.

Blue Oyster, Black Oyster and Vistalite drums are augmented by a new selection of cymbals, and the very welcome addition of tambourines. There are also over 1000 new MIDI loops to get you started, and, like the original, it squeezes all of its data into a relatively concise 1.5GB.

You'll need to update your Addictive Drums to v1.1 to install AD Retro; a v1.1 installer is included on the DVD, and for some reason insists on reinstalling all of the original content as well as the new material. Apart from that, it's plain sailing, and the new kit pieces and presets show up alongside the originals in all the places you'd expect.

The three new sets of drums have distinctive characters that complement each other nicely. The Black Oyster has a light and snappy feel to it, with a relatively fast decay, while the Blue Oyster is set up to give a rather livelier tone and the acrylic Vistalite drums have an even lengthier, ringing sustain. All sound good in their raw state, although the bass drums are not the easiest to work with in a mix, especially if you go for the booming 26-inch Blue Oyster kick.

These kit pieces are put to work in a variety of new presets, which make heavy use of the program's compression, filtering and saturation effects to create retro sounds. The most successful of these, to my ears, are the '60s kits, which do a pretty good job of capturing the lo-fi excitement of Motown and Merseybeat drums. There's also a collection of Heavy Rock presets, which represent a game attempt to reproduce various John Bonham drum sounds, but I'm not sure how many listeners will be fooled. Some interesting experimental and modern pop setups are also included. The new MIDI grooves are mostly very usable, covering a decent range of styles from Motown to '70s hard rock, with plenty of fills and variations.

All in all, AD Retro is a very nicely thought-out extension to the original Addictive Drums, which broadens the range of sounds available in a seamless and very organic way. If you're already an Addictive Drums user and you want '60s and '70s drum sounds, it's a no-brainer. If you haven't yet got addicted, it's one more reason to try it out! Sam Inglis

Daniel Pearson has played bass for big-shots such as Coolio, Macy Gray, Jennifer Lopez, and Jessica Simpson, and has now lent his undeniable talents to this new Big Fish Audio phrase-sample collection. I've got to know quite a few such libraries over the last few years, and they are by no means all created equal — each seems to have its own separate personality. Here, the emphasis has been on maximising usability and flexibility, so instead of the more flamboyant and inspirational performances of some other titles, Daniel Pearson speaks softly and carries a big stick (whether you choose to take that figuratively or literally).

In the pursuit of versatility, the library's 1.6GB of content (duplicated in four formats) covers a lot of ground, not only in terms of nominal tempo (50-170bpm), but also in terms of style — the 'Rock, Pop, Funk, & R&B' name-checks in the DVD's subtitle are only the start. All loops are categorised by the folder structure into tempo and key groups, and there are a number of different riffs and variations to choose from in each folder. Each loop is provided with both amp and DI signals, giving a lot of scope for remodelling the sound to suit your particular production, and this is likely to improve usability a great deal in practice. Although the polarity of the amp and DI signals seems to have been matched, they don't appear to have been time-aligned, so be prepared to experiment with shifting the files against each other for the best combined sound.

I've not met Daniel Pearson myself, but I'd guess that he probably wears shades at night, and that, in another life, he'd probably have been one of those granite-faced presidential bodyguards. What I mean by this is that these loops have a solid, 'don't mess with me' authority which should provide the firmest of foundations for any track. Even when things get a bit funkier or take a bit of a disco direction, you still get the impression that this guy is the one least likely to humour a stage invasion. This seriousness permeates through to the sonics, too, which avoids any danger of the skippier licks turning out lightweight.

Thoroughly dependable though this collection is, I found it hard to get truly excited about the loops on offer. For all their efficiency and reliability, they seemed on occasion a little more understated than they needed to be, and didn't drive things along as much as I'd have liked. However, if you're after this kind of musical restraint, then this collection has to be considered good value for money, on the basis of its clear organisation, wide stylistic reach and powerful sound. If you're thinking of parting with your hard-earned, then you should also note that all these bass loops were designed specifically to match the drum loops in sister library LA Drum Sessions Volume 2, and follow an identical folder structure. Mike Senior

Difficult Conversations In The Studio
3 weeks 4 days ago.