After five and a half years hard labour with no time off for good behaviour, the Vienna Symphonic Library samplists have finally released their definitive Symphonic Cube orchestral masterwork in the form of 10 Vienna Instruments. Solo Strings, Chamber Strings, Orchestral Strings I & II and Woodwinds I were reviewed in SOS July 2006, and these are now joined by Woodwinds II, Brass I & II, Harps and Percussion.

Woodwinds II adds piccolo, second flute, alto flute, Viennese oboe, two English horns, small 'E' flat clarinet, bass clarinet, and contrabassoon to the basic set in Woodwinds I. Most of these instruments made their debut in the 2004 Pro Edition, though the small clarinet and second English horn were previewed later in the VSL Horizon title French Oboe. All have been expanded with numerous extra performance styles and variations, resulting in a 63.4GB collection.

The new four-note arpeggios played by piccolo, flute, and oboe sound very lively, and the contrabassoon has had a powerful new overblown special effects version added to its 16 crescendo and diminuendo options. I also enjoyed the alto flute's grace notes, which give the instrument a mournful shakuhachi-like quality in the low register. A couple of minor complaints: this flute's so-called legato arpeggios are over-articulated, and the advertised English-horn arpeggios and mordents, alto-flute arpeggios, and bass-clarinet grace notes are missing.

While Woodwinds I is fine for basic woodwind arrangements, certain instruments on Woodwinds II are indispensable for serious orchestral work. The combined cost of the two collections is hefty, but quality usually comes at a price; if you need a comprehensive woodwind section capable of every musical nuance under the sun, the pair offer an immaculate solution.

The 78.5GB Brass I provides solo trumpet, French horn, tenor trombone, and tuba, as well as trumpet, trombone, and horn ensembles, all of which first appeared in VSL's First Edition. The collection's new content focuses on performance samples, but a more significant innovation is the inclusion of muted samples for the trumpets and trombones and hand-stopped horn-ensemble performances.

Despite their attenuated, slightly cutting 1930s dance-band tone, the muted-trumpet ensemble samples have enormous warmth, presence, and charm. I wish the old comedy mute 'wah' effect had been included, but I guess that falls outside VSL's remit. The muted trombones match the trumpets' vintage radio sound, but the hand-stopped four-horn ensemble samples are altogether more stately and formal; their crescendos swell inexorably from a wiry hum to a piercing and dramatic metallic blast.

Brass I' s new four-note arpeggios (played staccato at two speeds, upwards and downwards in all keys in major, minor, and diminished scales by the solo trumpet and trombone and by all the ensembles) are faultlessly and confidently executed — the same goes for the upbeat repetitions, a huge menu of single, double, and triple upbeats. Played at eight or nine different tempos, these are a great rhythmic resource.

Although nicely played, the three trumpets' big-band-style falls lack the uninhibited raucous delivery of jazz players — the same goes for their 'rips', an almost apologetic semitone bend up to a sustained note. 'Out of tune' sustains (which eventually drift into pitch) introduce a Portsmouth Sinfonia flavour, but if I wanted out-of-tune samples, I'd hire real players! (Sorry - couldn't resist that one...) Continuing the dissonant theme, the three trombones' atonal clusters evoke the downbeat, introspective atmosphere of a 1950s black-and-white art film.

Brass II (53.5GB) offers piccolo and bass trumpets, bass and contrabass trombones, contrabass tuba, Wagner tuba, and cimbasso from the Pro Edition, an impressive eight-player French-horn section and a new 'triple horn'. This has an extended range, and produces a more intimate and powerful tone than Brass I 's slightly distant-sounding French horn. The triple horn player deserves triple pay, delivering tightly synchronised glissando samples which, when played as a chord, all arrive simultaneously at their target pitches. If you want more control of the glissandos, the Performance Glissandi patch inserts a real played glide between two notes. It's a shame there are no really fast horn glissandos — I miss that exciting 'whoop' effect.

The piccolo and bass trumpets both gain useful new styles: the little one's set of mordents and bright, martial marcato Performance Legato samples are excellent, while the bass instrument contributes ballsy falls and a (literally) pulsating set of 'duophonic' glissando noises. When applied to brass instruments, the new trademark Performance Trills style can produce a rapid, free-jazz burbling — not necessarily desirable, but it's amazing to get this effect using samples! Speaking of obscure arty noises, every single instrument and section on both brass collections has flutter-tongue samples. It beats me why manufacturers feel obliged to include this style — can we please have a flutter-tongue truce?

Formerly released as the Horizon title Epic Horns, Brass II' s mighty eight-piece French-horn section is one of VSL's big sellers, offering a Hollywood sound at a Cricklewood price. The Epic Horns content has been transferred wholesale to Brass II with no additions.

For more information about the sounds in these libraries which have already appeared in previous VSL products, check out the reviews of Vienna Symphonic Library's First Edition (SOS May 2003) and Pro Edition (SOS May 2003 and March 2004 respectively), and also the reviews of VSL's Epic Horns and French Oboe Horizon titles (SOS December 2004 and January 2005 respectively). Dave Stewart

There can be few computer musicians who aren't aware of Spectrasonics Stylus RMX. Since its launch, the company have reformatted some of their existing sample libraries as SAGE Expanders for it, allowing you to combine and layer groove elements from different libraries. US company Ilio have now followed suit with four of their own major libraries. We've reviewed these in previous formats before, but now that they've been sliced and diced to fit the RMX format, they're infinitely more flexible — and they cost less too. 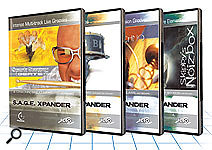 Just to give a quick overview, Skippy's Big Bad Beats (originally reviewed in SOS February 2000) is a set of hi-fi, funky loops with plenty of kick and depth. These have proven popular with hip-hop and trip-hop producers, but slot into other dance genres quite comfortably. As with most RMX libraries, the loops are available in 'layers' so that you can use just the elements you want. Stark Raving Beats (reviewed August 2002) is a touch more frantic and favours higher tempos, but it features the same high production values. If you like your music full of energy, this is a good title to check out.

Skippy's Noizbox is heavily influenced by European Techno and includes many more processed and industrial sounds, while Ethno Techno (reviewed SOS March 2001) builds on world percussion sounds, including many African percussion instruments created from junk. Ethno Techno is perhaps my personal favourite, because I have a soft spot for world music sounds, and some of the layers here are rich with delicate taps, tinkles, and scrapes that combine perfectly with elements from the other libraries.

In addition to the usual loops, there are many additional loops based on individual instrument types, such as bells, djembes, Korg Wavedrum, snares, tambourines, and so on. All four libraries also include a bonus section (the same on every disc, but different to the bonus section on Spectrasonics' own SAGE Expanders) offering some very usable excerpts from Memphis Horns, Phat Fingers, World Winds, and Trancefusion. Also included are a number of remix Multis that can be manipulated from the Stylus RMX mixer page.

The only problem with these libraries is that you're spoiled for choice, as virtually everything here will set your musical creativity in motion. The tempo range over which the loops sound natural is very wide, which is a big advantage over fixed-tempo libraries, and the sheer breadth of material is almost overwhelming, even though each library comes in at only around 1GB. It isn't often that you find this quality of both sound and feel in libraries priced so attractively, and now that they can be used from within Stylus RMX, it is as though they've broken free of any constraints they may once have had as regular sample libraries. Paul White

No prizes for guessing the musical aims of this library — it's aimed squarely at urban R&B and hip-hop producers. The bulk of the 800MB of samples are loops within 22 construction kits, although there are also some additional loops and some individual samples. The kit folder titles try to give a hint at the content and, usefully, include both the original tempo (78-114bpm) and key. The kits include roughly 10-25 loops, each containing an individual musical element such as bass, drums, percussion, synth lines, guitars, hits, and special effects.

Each kit also includes an example 'mix' file so that the new user can audition the construction kit and get a quick taster of what might be produced with the content. In browsing through the loops, the most striking feature of the kits is how melodic they sound. In terms of urban R&B, Ueberschall have certainly hit the mark — these are very contemporary and commercial-sounding construction kits. With the addition of some suitably slick vocal arrangements, it is very easy to imagine arrangements based on these loops sitting alongside the current R&B playlist on any urban-dominated radio station or video channel — think Beyoncé or Justin Timberlake and you will be in the right musical ball park, although there is also a nice retro funky edge to some of the kits. However, given these comments, if you prefer your hip-hop on the grittier side, then there are probably better bets than this.

While the construction kits make up the bulk of the library, the Construction Singles folder contains some useful individual samples associated with each of the kits. These are mainly single hits and typically include kicks, snares, hi-hats, claps, percussion, bass, guitar, and various special effects. While this collection makes no pretence to offer any sophisticated multi-sampled instruments, this folder provides a very useful resource if you want to program your own variations to compliment one of the construction kits and add some further variety.

The final folder is named Additional Content, and is a catch-all for the rest of the loops. There are subfolders containing a decent selection of synth and guitar lines plus a really good range of turntable scratches — the latter are great for adding some ornamentation to the main construction kits. Also included are two subfolders of one-shot vocal samples containing various male and female vocal snatches — not enough to construct a whole vocal track, but useful for adding a little colour.