While large-diaphragm mics seem to get all the glamorous press, small-diaphragm models have certain advantages, such as a generally more accurate off-axis response and a small acoustic shadow, making them the first choice for many types of instrument recording. Samson's new C02, measuring just 20 x 150mm, is a small-diaphragm mic of the classic 'stick' type. It has a fixed tight cardioid pattern that verges on the hypercardioid. Few constructional details are given in the documentation, but the diaphragm seems to be around half an inch in diameter and the capacitor capsule requires 48V phantom power to operate. The housing is made from plated brass with gold-plated XLR pins to connect to a regular balanced mic cable, and the overall standard of construction seems solid and rugged.

The mic is only supplied in matched pairs in the UK, which is good if you need to do stereo recordings. A small foam windshield is included for each mic, which can help reduce modest wind noise outdoors, and both mics are packed in a rigid plastic case with a contoured foam lining — while not as fashionable as a wooden box, this solution is both tough and practical. The standmounting clips supplied hold the mic firmly within resilient rubber sleeves. This isn't nearly as effective by way of vibration isolation as a proper shockmount, but it is still rather better than a typical rigid stand clip. 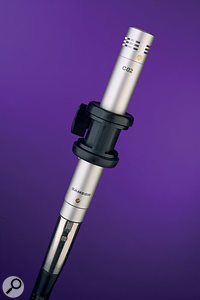 Judging by the technical spec, the mic is reasonably sensitive at -40dBV/Pa (which equates to 10mV/Pa) and its noise level of 22dBA, while far from the state of the art, is quiet enough for most close-miking applications. I wouldn't recommend it for recording quieter sounds or for working at a distance, but then that's clearly not its intended application. The manufacturer's recommendations suggest the mic is good for drum overheads, piano, acoustic guitar, and hi-hat — none of which are over-quiet when heard at close quarters.

The frequency response is given as 40Hz-20kHz, and this tallies with the enclosed graph. There's a gentle presence peak centred at around 8kHz, which usually helps a mic sound airy without it becoming hard or edgy, below which the response is generally flat until the low end starts to roll off gently below 100Hz or so reaching -3dB at about 50Hz. The maximum SPL is a hefty 134dB, so drum kits and guitar amps aren't going to intimidate this mic, but at the same time you'll get plenty of signal from an acoustic guitar or other instrument of similar sound level. Overall the dynamic range is 112dB and there are no pad or roll-off switches on the mic.

As I suspected, the C02 probably isn't the best mic to choose if you need a touch of 'global warming', but it delivers a fairly accurate and detailed sound that's well suited to recording percussion and acoustic guitars. The subjective background noise level turned out to be adequately low for close-miking most instruments, even those that weren't particularly loud, but noise became more evident when working with more distant or very quiet sources. Used with acoustic guitar, the C02 produced a detailed, well-rounded sound, but without its presence peak making the sound aggressive or edgy. By contrast, the SE Electronics SE1As I used for comparison gave a noticeably more jangly result and exhibited a similar level of background noise. Which is best depends entirely on the sound you are going for.

Further tests against a Sennheiser MKH20, which I regard as something of a yardstick for small-diaphragm mics, showed up a slight lack of presence and focus in the C02, and of course the Sennheiser is incredibly quiet. However, given the C02's entry-level price, it holds up pretty well against its immediate competition and is capable of delivering very musical results.

As a drum overhead, the C02 works well enough, though I find it works better with some low end rolled off. The presence peak gives the cymbals a nice lift, yet the overall sound is still smooth. Similarly, the mic makes a perfectly usable percussion mic and even sounds fine on vocals if used with a pop shield, giving lie to the idea that you can only get a good vocal sound using a large-diaphragm mic. The shockmounts are worth a mention. As expected, they don't provide much isolation from low-frequency thumps and knocks, but they certainly reduce the levels of mid- and high-frequency vibrations reaching the mic.

The C02 is clearly built to a price and performs similarly to many other Chinese-built, low-cost mics, but it still offers great value in the UK and can turn in very decent results in a variety of applications when used properly. More sophisticated microphones may give you lower noise and a better sense of focus, but how much difference this will make in practice depends very much on how you use your microphones and in what acoustic environment you use them. If you've grown up with dynamic mics and want to try your hand at recording instruments with capacitor mics, you should notice a big jump in quality, so the C02 is ideal for the project-studio owner working to a tight budget. On the other hand, if your budget can stretch to something better, it may save you money in the long term, as microphones last a very long time.

While this mic offers nothing much out of the ordinary, it can be used to make good-sounding instrumental recordings within a typical home-studio environment at a very attractive UK price.

£99 per matched pair including VAT.