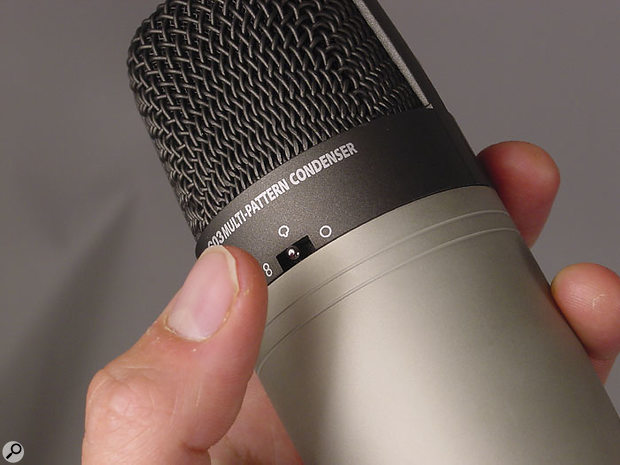 A switch on the rear of the mic allows selection between supercardioid, omni, and figure-of-eight polar patterns.Photo: Mark Ewing

The Samson C03 is the manufacturer's first true capacitor microphone — the C01, reviewed back in SOS January 2003, was a back-electret design. This large-diaphragm mic offers a choice of three pickup patterns, along with switchable low-cut filter and 10dB pad. What's more, the competition in the mic market is now so fierce that it's UK price is less than you might have expected to pay for a no-frills budget model only a few months ago.

Based on a large-diaphragm Chinese-built capsule, the mic is very nicely styled and cleanly engineered, with a choice of supercardioid, omni or figure-of-eight polar patterns. Supercardioid is a bit of an odd choice for studio work, but looking at the supplied polar plots indicates that it isn't too tight — very narrow cardioid patterns can be problematic if you're working with a singer who moves around a lot.

The mic also has a low-cut switch (12dB/octave at 100Hz) and a switchable 10dB pad, and comes in a rigid plastic padded case with basic standmount, but the shockmount is an optional extra. The charcoal and metallic satin finish is very attractive, while the blue phantom power status LED is so bright that you could probably use it to find your car keys in the dark!

Photo: Mark EwingThe quoted input noise is a reasonable, but by no means exceptional, 23dBA EIN, and in normal project-studio applications is certainly low enough to be considered negligible. At 10mV/Pa, the sensitivity is roughly comparable with many other studio capacitor mics, possibly just a decibel or two less, and the frequency curve is nominally flat for all patterns, with the exception of a gentle presence peak centred at around 7kHz. With the pad switched in, the mic can put up with SPLs of up to 142dB without flinching, and the specified frequency response is from 40Hz to 18kHz at the -3dB points.

I tested this mic with vocals and saxophone, and also used it as a drum overhead, and in all applications it delivered good results, with no obvious faults or problems. The lack of strong presence peaks gives the mic a reassuringly neutral feel, and it captured the subtle detail of the sax very well without sounding strident or honky.

I feel the low-cut filter is best not used for vocal recording, as it noticeably affects the bottom end of the vocal range. It could be useful when using the mic as a drum overhead, though, as it often helps to roll off the bass when mixing the sound in with the predominantly middly and bassy close mics.

Checking the tonality of the mic over the three different patterns isn't easy, because the proximity effect of all mics varies with pattern. Most people know that cardioid mics sound more bassy when you move closer, but figure-of-eight mics also have their own flavour of proximity effect, while omni mics are immune to it altogether. Ideally you need to have the source at least a couple of feet from the mic in order to exclude the proximity effect completely, but then the room coloration comes into play more on the omni pattern and also makes judging difficult.

Nevertheless, subjective testing suggests that the tonality does stay nominally similar, provided that you remain close to the mic's axis, regardless of which pattern is selected. The high end of the omni pattern will inevitably change as you move off axis, especially with a large-diaphragm capsule such as this one.

The Samson C03 is a smart-looking mic with multi-pattern performance at a budget price. Its technical spec is more than adequate in all the areas that are important, and what really matters is that it makes a fine job of just about anything you care to point it at.

Every month this sector of the market gets more crowded with mic bargains, and that can only be great news for the consumer, as far as I'm concerned. While it's perfectly true that spending a lot more money on a well-known 'professional' mic will almost certainly buy you better build quality, higher consistency and a more impressive technical spec, the reality is that under the conditions most project studio mics are used, the results you can get from a sensibly designed budget mic like this one come very close to 'the real thing'.

The C03 is a visually distinctive mic that offers three polar patterns and good sound quality at a bargain price.