The capsule within this microphone has a diaphragm coated with titanium, rather than the usual gold. We find out whether it makes a difference.

Most large-diaphragm condenser microphones doing the rounds today are based around a gold-coated mylar diaphragm, where the gold is either evaporated or sputtered onto mylar film prior to capsule assembly. This is also true of most of the SE Electronics microphone range, though their new and distinctively styled multi-pattern Titan is something of a departure from this tradition, because it uses titanium rather than gold for the conductive diaphragm coating. 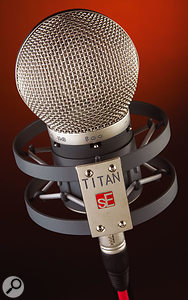 Apparently, titanium is much more dimensionally stable than gold when subjected to temperature change. Vocal mics in particular have to exist in a fairly harsh environment, where warm, damp air is being breathed over them all the time, so if the gold expands at a different rate to the mylar beneath it, then it's reasonable to assume that the mic's character will change.

Another issue is that gold-coated diaphragms can wrinkle over time due to the unevenly matched expansion coefficients of gold and mylar, whereas the SE Electronics designers expect titanium to give better longevity in this respect.

Beyond such matters of stability, I can't see why the choice of metal should affect the tonality of the microphone in any significant way, as its primary function is to act as a charge-carrying electrode, though the designers believe that it is a significant contributory factor. The bulk of the moving mass is made up of the mylar —the metallic coating is typically only a few atoms thick, whereas mylar membranes tend to be between three and six microns thick — so I would have thought that the mechanics would have been dominated by the physical properties of the mylar rather than its conductive coating.

The casework and shockmount design are certainly eye catching, but other than the new diaphragm material the rest of the engineering design is unashamedly traditional. Centre termination has been used for the dual-diaphragm, multi-pattern capsule, while the onboard preamp is based around tried-and-tested Class-A FET circuitry with a transformerless balanced output stage.

The mic needs only standard 48V phantom power, and there are horizontal toggle switches below the basket to bring in a 10dB pad and a low-frequency roll-off filter. A further switch selects cardioid, omni, or figure-of-eight polar patterns. According to the manual, the microphone has a particularly good transient response, so in addition to its obvious application as a vocal microphone it should also be well suited to recording percussive instruments.

On paper, the Titan's frequency response covers 20Hz-20kHz, but checking the frequency plot reveals a gently rising response with a presence peak up at around 10kHz, which no doubt helps the microphone resolve transient detail. The sensitivity of the microphone is 40mV/Pa ±2dB (reference 1V/Pa at 1kHz), which puts it in about the same ball park as other studio capacitor microphones, but the 18dBA EIN, while typical of many competing products, is not nearly as quiet as the best. The maximum SPL for 0.5 percent THD at 1kHz is 128dB, which again isn't particularly high by modern standards, but should be adequate for anything other than close-miking exceptionally loud sources such as kick drums and some brass instruments.

The mic's circuitry is mounted on two small circuit boards, with surfacemount components appearing alongside discrete FETs and transistors to increase the board density. The capsule, which is around one inch in diameter, is perched on an isolation mounting inside the dual-layer, spherical steel basket, while the body itself is made from machined brass. I feel the basket could have been made a bit tougher, but provided that you take reasonable care with the mic, it should stand up fine to normal usage and it could be argued that anything heavier might have interfered with the sound.

A further machined locking ring secures the microphone to the included shockmount, and the whole kit is shipped in a foam-lined camera case, complete with an XLR cable.

I set up the Titan in its shockmount and tried it first on vocals. Its resistance to popping seemed rather better than that of most capacitor mics, no doubt due to the larger than usual basket. Because there are very few physical obstructions close to the capsule, the sound is also rather less constricted and more three-dimensional than I'm used to hearing from a large-diaphragm microphone, especially when in cardioid mode, which is the most challenging in this respect. Having said that, a separate pop shield is still a good idea, as you can make the mic pop if you try. 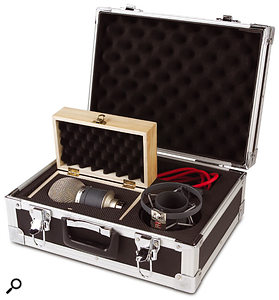 When working fairly close to the microphone, the proximity effect adds a degree of warmth without making the sound boomy or over-coloured, though the low-cut switch can be brought in if necessary to counter this. While the low end is warm and solid, the high end is open and airy, but in a very smooth way. Overall, the sound is flattering and intimate, but not at all hard or harsh.

My tests with acoustic guitar were interesting, because right away I felt the mic was picking up rather more of the room ambience in cardioid mode than the other cardioid mics I was using for comparison. In the right room, this conjures up a nice sense of space, but where the room is less than ideal it may be necessary to take a little more care than usual setting up acoustic absorbers around the recording area. I can only assume from this that the cardioid pattern is on the wide side of normal, and though this means that the angle of capture is wider, it also tends to produce a more open sound with better rear rejection than a tightly focussed cardioid. The tonal change between cardioid and figure-of-eight is subtle, and moving to omni opens the sound up more, involving the room ambience to a greater extent.

Finally I tested the mic on some hand percussion and found that it captured the transient character of the sound in a very convincing and natural way. As with acoustic guitar, you get the impression of accuracy, though in reality there is some subtle flattery going on. What the Titan doesn't do is add an artificial edge to transient sounds as some mics seem to do — the result is always very musical and spacious.

The Titan comes towards the top of the SE Electronics price range and is aimed at professional users and very serious project studios. I can't say for sure that the mic would sound any different if a conventional gold coating had been used in place of titanium, but, whatever the technical reasons, this microphone has a distinct and very musical character.

As a vocal mic, the Titan should suit a wide range of singers and styles, as its presence peak is above that part of the spectrum responsible for harshness, while its subtle flattery really makes for a classy and intimate sound. What struck me most on a subjective level was the spacious and involving sound in cardioid mode, though the silky top end is equally impressive in its ability to open up the sound and enhance detail without adding hardness or sounding in any way brash.

Overall, the Titan certainly doesn't sound like a 'me too' microphone, and I'm sure it will take its place alongside the Gemini as a serious contender that people choose because of its distinctive sonic character.

I still don't know how much of this mic's sound is down to the use of titanium, but it certainly has a subtly flattering musicality of its own.