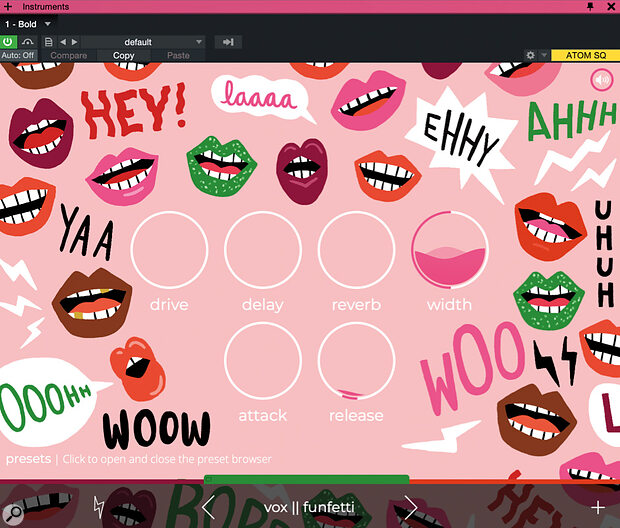 Bold is a sound library featuring sampled drums, effects/Foley, keys and bass sounds. In a sea of drab, Bold is a blazing dollop of colour, thanks to its wonderful UI which most reminds me of a Tom Tom Club album cover; it’s different. It’s the first instrument from new plug‑in mongers Shout Audio, a company based around increasing gender diversity in music production and enabling access to as many people as possible. Indeed, this plug‑in is free to non‑profit organisations; Shout put their money where their mouth is.

All of that would be moot if the product was terrible, so I’m delighted to report that Bold is an absolute hoot of an instrument. If you’re looking for a plug‑in to quickly spark some ideas and get a song going, Bold is it. On first loading, I immediately got lost in a very Metamatic drum kit (the Pancake kit, one of the four it comes with) and ended up doing a whole ’70s dystopian synthscape with only Bold. The track made heavy use of Bold’s built‑in effects section which is deliberately sparse and simple. Shout Audio’s stated philosophy is of immediacy and simplicity rather than overwhelming the user.

However, simplicity should not be equated with lack of power or purpose. As a starter, the drum kits are excellent and Shout are to be commended for both the quality of capture and curatorial care they have invested in these samples. As someone who regularly spends hours hunting for an inspiring kick, snare or percussion sound, Bold sparks joy.

Along with the drum kits, you get what Shout call three ‘FX’ kits. The first, Kitchen, is indeed very cuisine‑y, with plings and dinks that sound marvellous transposed lower, very menacing and atmospheric. Then there are two FX string presets which are both very chill, the second being more dreamy due to added effects.

The three banks of Vox are very silly indeed and are crying out to become hooks, interstitial exhortations or simply sprinkles of background flavour. As I was auditioning these, I was alternately giggling and then thinking, hold on, that’s actually a great little hook. I would not be surprised at all to hear a lot of these sounds in future hits.

Bold is a steal. If you don’t find some inspiration out of the array of 600MB of sounds this delightful plug‑in presents, I would suggest checking your ears and then your pulse.

The biggest chunk of Bold is next; 11 presets of ‘Keys’ which are nine basic polysynth sounds along with a couple of sampled vocal banks. All of these sounds are usable immediately, some featuring an arpeggiator which, again, is deliberately simple. No menu‑diving here, just hit that lightning bolt on or off.

Rounding off, we have an ‘electric’ bass preset and a synth bass. Nothing paradigm‑shaking here, merely solid bread‑and‑butter sounds. Lovely.

For the frankly mad price of $15, Bold is a steal. If you don’t find some inspiration out of the array of 600MB of sounds this delightful plug‑in presents, I would suggest checking your ears and then your pulse.